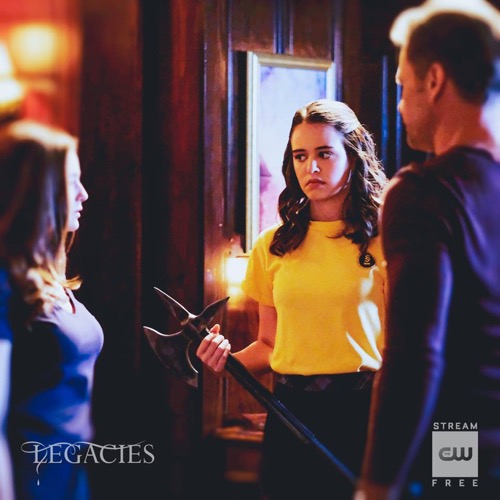 Tonight on the CW their new supernatural series Legacies air with an all-new Thursday, November 8, 2018 episode and we have your Legacies recap below.  On tonight’s Legacies season, 1 episode 3 called, “We’re Being Punked, Pedro,” as per the CW synopsis, “Hope, Lizzie, Josie and MG are forced to participate in a community service project in the Mystic Falls town square as punishment for breaking the rules.

Meanwhile, Landon and Rafael’s attempt at a carefree life on the road takes a dangerous turn when they become unsuspecting targets. Finally, Alaric realizes that keeping secrets from his students may be causing more harm than good.”

Legacies begin tonight in 14th Century, France where two warlocks find The Guardian in the woods, one is determined to retreat, while another feels that is only child fairytales, but their presence has awoken him. The brave warlock (Franco Castan) attempts to stop the Guardian who has killed his friend but is quickly slaughtered as well, with his blood splattered onto the dagger.

Present Day, Alaric Saltzman (Matthew Davis) continues to do research on the dagger but needs a translation on it. He senses something outside the window but dismisses it.

Inside the Salvatore School, Dorian Williams (Demetrius Bridges) is teaching his spells class when Hope Mikaelson (Danielle Rose Russell), Lizzie (Jenny Boyd) and Josie Saltzman (Kaylee Bryant) are all summoned to see Alaric; where they are being punished with community service for the brawl at the game the previous night. Lizzie throws Josie under the bus and seems thrilled to learn that Alaric is angry with Hope and has to be punished like the rest of them. When his daughters leave, he tells Hope he can’t drag her any deeper into what is going on until he gets some dragon-sized answers.

Dorian gives the entire team the equipment to clean up the town of trash and graffiti. Hope takes the pole to pick up the trash and Josie joins her, after feeling betrayed by her sister; everyone else goes to clean up the graffiti.

Back in the woods, Rafael Waithe (Peyton “Alex” Smith) and Landon Kirby (Aria Shahghasemi) cook a rabbit for nourishment. Rafael tells Landon he will stick with him no matter where he goes, as Landon wonders whether Hope hates him or not. He can’t explain why he lied, it’s like the knife wanted him to steal it and wanted him to lie. Landon has an idea where they can make some money and Rafael could put his new werewolf skills to work.

Lizzie pushes Milton “MG” Gladstone (Quincy Fouse) to get the work done as Kaleb (Chris De’Sean Lee) feels they have nothing to apologize for, even though they used their magical power. Dana (Katie Garfield) says “Hi” to MG, who is ready to take a break with her; the townie dumps his drink on Lizzie who is furious. She tells Pedro who sees her choose his words wisely; something the Guardian witnesses.

Emma Tig (Karen David) comes to see Alaric, who takes a rain check on therapy. She sees the knife that the Dragon was chasing and tells him that Dorian never misses his appointments. After Alaric tells her about the knife and its powers, she suggests he destroy it. He tosses his apple into the cylinder and reveals according to legend the dagger is indestructible. Emma thinks Alaric has a lot on his shoulders but he insists he is fine. Lizzie bursts in calling her dad a jerk, saying because of this Josie and Hope are sisters in solidarity and had he just been at the game, none of this happened. Emma feels Lizzie has a point as Lizzie tells Emma at least she knows why she is so screwed up.

After she cleans up she is to hang out with the primary students. Lizzie talks to young Pedro who tells her repeatedly the statue has moved, but Lizzie says, “We’re being punked, Pedro.” She tells Pedro to run and helps him get inside and tells him to go find her dad, she tries a spell and screams when he spreads its wings. Alaric finds Lizzie on the ground, unable to move with deep grey gashes in her. Alaric calls Dorian, asking for any information on the French folklore Gargoyle Patrotho, saying Lizzie is paralyzed and worried it will spread to her heart.

Josie questions Hope about poking Lizzie all the time, wanting to know why she spends so much time with her dad and what happened with Landon and Rafael. Hope gets distracted and pokes her foot with the pole, making Josie laugh when Hope heals herself. Landon brings Rafael into the town where they place bets where he can do things in an extremely short amount of time, making them quick cash. Someone offers Rafael $100 if he can do it in 10 seconds, while someone sends a message that they are here.

All the children are placed in a safe place while Alaric retrieves the dagger and searches the school for the Guardian/Gargoyle. He finds the creature, but just as he is about to stab him, the creature grabs his arm and stops him.

Hope sees Josie bend over in pain, saying MG kissing Dana is making her nauseous. Hope wonders when it will be Josie’s turn to chose the guy she likes, over her sister Lizzie having “dibs.” Hope admits she is in trouble for using black magic, but she didn’t reveal she did it with Josie. She also tells her that Landon and Rafael took off together as Josie explains that Lizzie is being extra testy since her mom is gone on recruitment missions lately. Hope says they can do a spell that will help them track where the boys are right now, and Josie is happy.

In the woods, the boys are enjoying their hamburgers when Landon sees a note on some of the money saying “Run Wolf or Die!” Landon sees an image of Hope which quickly disappears. He says they need to get out of there and Josie stops the spell as she feels the twin pain and that Lizzie is in trouble. At the school, the Gargoyle tries to leave the school, but can’t thanks to Lizzie’s spell.

Dorian tells Hope and Josie he is under strict orders to keep them in town, but Hope wants to know why he is researching that. MG compels Dana and wants to know the truth, she reveals she is secretly in love with her BFF’s boyfriend and he’s clearly in love with Lizzie.

Landon puts out the fire and tells Rafael they need to keep going but he wants answers, which is too late when both get darts in their neck. Meanwhile, Lizzie is turning more and more to stone as the Guardian approaches, Emma creates a window in the wall, where the creature can look in and only sees an empty room. He continues looking while Emma tries to catch her breath, terrified.

Landon and Rafael wake up, chained to trees when the hooded man reveals himself to be Jeremy Gilbert (Steven R. McQueen). He assures them he is not there to hurt them and their new best friend. Back in Mystic Falls, MG finds Kaleb drinking Dana’s blood, knowing he’s not supposed to. He doesn’t care, saying he is sick of following Lizzie around like they are under some sad puppy spell. Kaleb compels her to forget about it and sends her on her way, making MG promise not to say anything.

Hope and Josie return to the school and give Alaric the manual for the gargoyles. Josie reveals she is the one who removed the containment spell and wants answers later. Jeremy reveals he is a werewolf hunter, saying the world is a scary place for supernaturals who use their powers in public. He says he works for Alaric sometimes and he asked Jeremy to check on them and keep them safe, Rafael learns about the note that Landon had and didn’t know about. Jeremy says they will bury the bodies and he is bringing them back to school; Landon says Rafael should go back to the school as he is better off without him. Rafael thanks Landon for being there after Cassie died, tells him they should do what they need to there and they are both going back to the school – All in!

Alaric, Hope, and Josie grab their weapons, but just as they are about to be with Emma, the kids, and Lizzie, the Guardian flies down at them. Alaric jumps in between, preventing him from killing Hope. Josie attacks and together with Hope they chant a spell and the Gargoyle explodes. Josie is furious for him jumping in front of Hope feeling he would have died. He says the research told him he wouldn’t have.

Lizzie is recovering quickly thanks to Josie. Alaric reveals he knew it wouldn’t attack him because Gargoyles are protectors and it felt Hope was the evil one, but she doesn’t think the school knowing that would feel any better. She advises him that if he wants her and the twins to get along all these secrets are going to tear them all apart. Alaric talks to all the students and teachers about the folklore and fairytales- the dragons and gargoyles. He tells them the creatures view them as the enemy, but they don’t know why they want the knife, but they will figure it out. He can’t promise there won’t be more attacks and asks them to look out for each other. MG brings Lizzie brownies as Alaric reminds them they are more than just a school; they are family who stands together and fights together, no matter what comes next. Hope stands in the hallway and sees Landon has returned. She storms off.

Outside the school gates, Dana and Sasha, wait for Connor who was supposed to be there an hour earlier. Sasha realizes she has no cell service and gets out of her car but suddenly screams. Dana calls out for her, only hearing the creaks of trees, suddenly her car begins to crush from above and she screams.