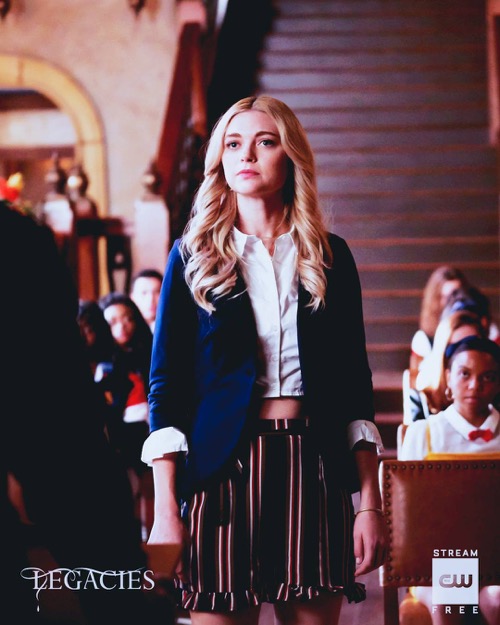 Tonight on the CW their new supernatural series Legacies air with an all-new Thursday, November 15, 2018 episode and we have your Legacies recap below.  On tonight’s Legacies season, 1 episode 4 called, “Weather the Storm,” as per the CW synopsis, “When two local students go missing, Alaric sends Hope, Lizzie, MG and Landon to Mystic Falls High to investigate. Meanwhile, as Josie helps Rafael adjust to his new life at the school, his reluctance to follow the wolf pack’s rules makes him a target. Lastly, an unsettling discovery puts Alaric and Sheriff Donovan at odds with one another.”

Legacies begin with MG (Quincy Fouse) waking up from a horrible nightmare, thinking a massive gorilla is chasing him; then someone in a ghost face is. He goes down to the fridge to get a bag of blood when he cannot go back to sleep. Kaleb (Chris De’Sean Lee) scares him from behind the fridge door, telling him he just came in from getting a midnight snack as MG reassures him they are good. MG looks at the towel Kaleb used to wipe his face.

Alaric (Matthew Davis) asks the students to give Sheriff Matt Donovan (Zach Roerig) their attention, as they are taking drastic measures are two students didn’t come home last night, Dana (Katie Garfield) and Sasha (Selah Austria). MG confronts Kaleb, saying he saw him feed off Dana; but Kalbe swears he didn’t kidnap her. Alaric wants a couple students to go to Mystic Falls High and have permission to compel them.

Lizzie (Jenny Boyd), Kaleb, MG, and Hope (Danielle Rose Russell) volunteer to go; which surprises Alaric that Hope would open up like that. Hope demands answers as to why Landon (Aria Shahghasemi) is back at the school and Alaric hopes to find out. Rafael (Peyton “Alex” Smith) tells Landon about the meeting and the girls missing from his old school; both feel the day needs to go perfect or Landon is as good as gone. Alaric tells Landon he could be of real use today.

The students from Salvatore School arrive at Mystic Falls High, where Lizzie tells him to get himself in check or leave but Hope defends him. Lizzie delegates everyone’s individual jobs, only wanting to work with MG.

Back at SS, Rafael sits with Josie (Kaylee Bryant), saying he’d rather hang with her than sitting with the wolves. She tells him she’s working on offensive spells for class, feeling the curriculum needs to evolve. He’s still trying to wrap his head around the fact that this is normal conversations there. Rafael says he will be happy when he knows Landon is okay. Jed (Ben Levin) interrupts them, telling Josie to leave as he needs to talk to Rafael, but he refuses to go saying he is in the middle of a conversation; Jed tells him he is Rafael’s alpha and he will do what he is told. Josie excuses herself and Rafael says he will walk her to class, completely dismissing Jed.

Landon gives Hope the tour of his old school, but she reminds them they are not friends. He doesn’t think Hope can handle a human school but several cheerleaders call him a loser and invite her to lunch, which she accepts. Meanwhile, Matt and Alaric find Dan’s car upside down in the woods, with blood on it. Alaric believed the creature who wanted the knife is far away, but they find Dana’s body with Vampire bite marks in her neck and Matt feels it is making perfect sense.

MG tries to compel a cheerleader, but it doesn’t work. He thinks Lizzie is distracting him, but their talk is interrupted when Alaric calls him, saying he needs to talk to everyone. He tells them Dana is dead, a vampire killed him and he just told Matt they had nothing to do with it and he needs to know that he is right, asking if they know about any of the vampires feeding in their school. They hang up and Lizzie demands MG spill the truth to her.

Hope finds Landon revealing to him that Cheryl (Laken B. Giles) invited her to try out for the cheerleading team. Hope also learned that Sasha and Conor were dating, Dana was sleeping with him behind her back; Landon swears that Conor isn’t a killer and wants to follow another student who is wearing a scarf.

Matt and Alaric continue to argue in the woods as Matt has to figure out how to lie to a 17-year-old girl’s parents about how she died; Alaric tells him there aren’t sides here. Kaleb is about to bite another girl when Hope and Landon stop him. Lizzie and MG arrive saying they know he killed Dana; Kaleb tries to run but Lizzie stops him. He reveals he only fed off Dana and swears he didn’t kill her, suddenly Sasha appears out of the woods saying she got snatched and ended up in a ditch somewhere. They all realize they have a turning vampire on their hands and don’t know what to do with her.

Jed and his pack of wolves confront Rafael, telling him they need to initiate him into the pack. They need to hear his story and that is his rite of passage; he can either do it willingly or not. They begin to beat him, but Josie rushes around the corner and stops them using magic. Rafael begins to transition and orders her to stay away from him.

Lizzie feels they should give Dana a day or two, but Landon feels she would be psyched to be at SS. Lizzie gives in but says there is no way Dana is joining drill team. Hope wakes her up as MG says she needs to feed and she will be fine. Dana begins to vomit out black and Hope says she is literally puking her guts out and tries to get her to stop.

The students look down and all that is left of Dana is her skin, Kaleb feels that Landon is the monster as none of this started until he stole the knife; no one jumps to his defense, not even Hope. Rafael is in one of the ruins and Josie tells him to calm down and breath, she is able to slow his heartbeat. She says it wasn’t magic, just years of dealing with Lizzie. It scares her if he doesn’t submit to Jed; he is an Alpha and he needs to submit to him, it is just the way it is. They both notice massive webs on the upper floor, where they find Sasha’s body inside; and now both of them are trapped inside.

Landon is in the bathroom when Conor walks in; he follows him into the hallway. Landon confronts him, saying he doesn’t get to pretend Landon doesn’t exist and punches him, ripping the skin right off Conor’s face. Landon runs off as things begin to emerge from Conor’s face. Outside, Lizzie washes the mess away as MG figures out it has to be a spider, explaining the Greek folklore. Lizzie feels if they had something from the creature they could do a tracking spell, Landon gives them a piece of its face, shocking them all.

Josie tells Rafael that she can’t just bewitch them out of there. She siphons power from things by touching them, she kisses Rafael hoping it would work. He doesn’t want her to apologize, but she doesn’t know if it worked as the room is still spinning; Conor walks in and they realize he is the creature. Josie is able to burn Conor a little bit, but she just pissed him off. Alaric calls and Lizzie is forced to answer it, he reveals he found Dan’s body in the glove compartment, but she tells him to trust her for once and they tracked down the creature as its a big spider.

Josie screams, but Landon is able to distract the spider as Hope says she hates spiders. Josie is able to free her and Rafael when she kisses him again; together the three girls are able to kill the creature. Rafael brings Sasha’s body outside when the girls return covered in spider guts. Later that night, MG compels Sasha and Hope reminds them they can’t compel her not to grieve.

Rafael talks to Josie wondering if SS is worth it. She admits everyone is flawed and has issues they are dealing with, but they all look out for each other. Rafael picks up the ball and goes to Jed and the pack, revealing he killed Cassie, his girlfriend in a car accident and it was Landon who revealed she was dead. Jed tells him to take a knee and submit to his Alpha, then says he is joking asking him to join the game.

Landon sits at the water where Hope joins him. She tells him he did well back there as he felt it was nice to be part of a team. She apologizes for calling him a monster but it will take time to trust him. He explains he doesn’t know why he was drawn to that knife; he doesn’t have an explanation to any of this, just like the rest of them. They are supposed to be together in this, but all day she ridiculed him and then hung him out to dry when it really mattered. She really wanted to know what it was like to be normal? He congratulates her on being normal!

Alaric chastises Lizzie, saying being a hero is not more important than being safe. She feels this is how he always treats Hope. He reminds her that Hope is not the goal, she is precautionary and the reason he trusts her is the last things he wants her to experience. Josie says the only reason they are alive is that they broke the rules and used offensive magic, and the last couple of days have proven he cannot protect them from everything. He dreaded this moment but promises to take it under consideration, saying he loves them… sort of.

MG and Kaleb have it out as he learns that MG sold him out to Lizzie. MG appreciates the rhyme of vamps before tramps but he cannot disrespect Lizzie. Kaleb informs him that the blood in the fridge is not human, telling him to ask himself why there are no rabbits around there.

Matt stops him in the hall, wanting to ask him about the girls from Mystic Falls; Alaric tells him not to say anything; but Kaleb confronts Alaric, wondering who told him. Alaric says he had his suspicions but Kaleb just confirms them. Kaleb tells Matt he knows he isn’t locking them up and Alaric stabs him with a needle in his neck. Matt says he has been doing this too long; Alaric warns Matt that if he threatens his kids he will come after him! Alaric tells Dorian about the spider, but Dorian hears a window break as Alaric reassures him nothing is coming his way a dark creature comes through his window and he tells Alaric to hold that thought.