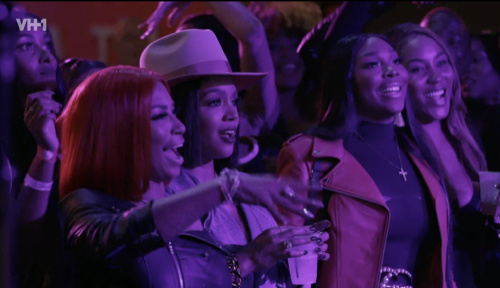 Tonight on VH1’s hit series Love & Hip Hop Atlanta returns with an all-new Monday, March 19, 2018, episode and we have your Love & Hip Hop Atlanta recap below for you.  On tonight’s season 7 episode 1, “TLet The Games Begin,” as per the VH1 synopsis, “In the Season 7 premiere, Kirk and Rasheeda deal with the long-awaited DNA test results. Stevie clashes with Estelita and tries to replace her with a new first lady of Danger Zone. A new face in the A causes a splash on the scene.”

The crew from Love and Hip Hop Atlanta is back for a new season of love, adventure, drama and beatdowns. We all know that nothing is ever simple in the A and it looks like this season will have no shortage of drama and madness as old faces will be replaced by some new and not so newcomers to the A.

This week on the season premiere of Love and Hip Hop Atlanta Rasheeda is hanging out with her friends and having a good time. She is with Mimi, Jessica, Karlie and Spice. Mimi introduces the ladies to her girlfriend Tye. Sierra announces that she is single after her husband’s affair with Mariah. Jessica asks Rasheeda “What happened with the whole deal with Kirk and the girl and the baby?” Rasheeda tells them “I don’t know if Kirk is the father of the baby.”

Kirk is alone and he wants to win Rasheeda back. She isn’t having any of it. She co parents with him and they talk about business, but other than that Rasheeda is not having it. Kirk has some news he has to reveal to his wife.

Ericka Menna is making her return to the Love and Hip Hop crew, but this time she is coming to Atlanta. When she comes in she meets with Jazzy Se and she tells him “I want you to do something for me.” He asks her “What’s up?” She tells him “I want you to make me a music star.” He asks her “How serious are you about this, because I have heard some things about you and the drama.” Ericka tells him “I’m not about the drama. I want to do this music thing seriously.”

Stevie meets up with Joc at Joc’s new house. He tells Joc “Joseline and I are a wrap. We just don’t love each other like that.” Stevie tells Joc that he is ready to focus on his music and Escalita. He also tells Joc and Kirk about the new producer he wants to work with. Kirk asks about Tommie. Joc says that she’s cool to work with as long as she’s sober. The men then move on to talk about Kirk’s paternity situation. He tells the guys “I have good news and I have bad news. The good news is that I took a paternity test.” Stevie busts out impatiently and asks “What did it say?” Kirk says “I am the father.” He goes on to say “The messed up part is I haven’t told her yet.” Joc tells him “Rasheeda has done more for you than anyone. She should’ve been the first to know. You owe her that.” Kirk says “I want to get my family back.” Stevie says “You have to tell her. You owe her that.”

Tommie is frustrated because her family is taking advantage of her. She has to take care of her mom. Her brother and he kids. She tells them “I need all of ya’ll to help me out so that I can spend more time in the studio.” Her mom tells her “How about we all come together and be one big happy family and you be a big sister to Versace?” Tommie is not happy to hear this.

Escalita is riding in the main float in the Puerto Rican parade. She has also set up her own performance because she hasn’t seen any progress from Stevie. Stevie decides to show up and surprise her. After the performance Stevie sits her down and tells her “You’re the queen of Danger Zone and that means you have to do a lot of work.”Escalita tells him “I feel like you haven’t been doing anything.” Stevie tells her “If I thought you were ready to perform I would’ve set it up. You’re at the top, but that takes work and there are new people coming in every day. If you’re not willing to do the work maybe we should rethink our arrangement.”

gets heated and the two ladies have to be separated by security. Jamine decides to show up at Rasheeda’s store with Carter to have him get to know his family. The drama is just beginning in Atlata