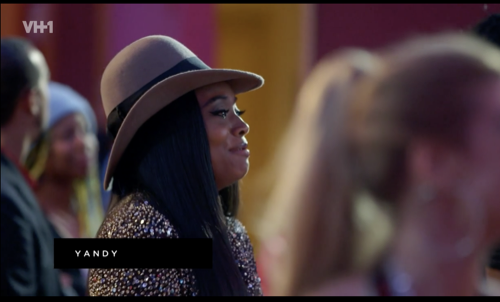 Tonight on VH1’s hit series Love & Hip Hop returns with an all-new Monday, February 26, 2018, episode and we have your Love & Hip Hop recap below for you.  On tonight’s season 8 episode 16 Finale, “Mix-Up,” as per the VH1 synopsis, “Anais attempts to mend her relationship with her husband, but Rich Dollaz could still be standing in the way of her happy ending. Safaree debuts the “Paradise” remix at a party.”

This week on Love and Hip Hop New York the creep squad meets up at the gym for a little workout. Safaree tells them “I’m finishing the Paradise remix and I want to have a release party for it.” Jacquee asks him “Does Yandy know about the  remix?” Safaree says “She’ll hear it at the party.” Jacquee tells them about his video shoot and how Kyanne showed up with Anais. Jacquee says “She was showing her box to everyone.” Rich was shocked. Safaree tells them “You’re all invited to the party.”

Remy, Yandy, and JuJu are hanging out. Remy’s body is undergoing some serious changes because she is preparing to have Pap’s sperm implanted with her eggs so that they can try and get pregnant. JuJu is happy with her relationship with Safaree, She tells her friends “We are having a good time and I enjoy spending time with him,” Yandy asks her “When you see him could you please ask him to call me because there is an artist that I think would sound great on the Paradise record.” JuJu looks a bit uncomfortable. She tells Yandy “You have to get in touch with him yourself.”

Anais is still upset that Rueben has moved out of the house. She meets up with Jonathon for a night at the skating rink. Jonathon tells her “I saw how distraught you were so I called Rueben and I got him to agree to meet you here.” Rueben walks around the corner and he and Anais begin to talk. She tells him “ I want us to be a family again and define what a marriage is.” Rueben tells her “I took my ring off because I was so hurt. How do I know that there won’t be another Rich Dollarz?”  Anais tells him “Because I love you and only you.”

JuJu is upset when Bianca doesn’t show up for practice  Yandy tells her “She texted me and let me know that she wasn’t going to make it.” JuJu wants to know why Bianca had texted Yady instead of her. Rather than worrying about it JuJu steps in and handles rehearsal herself. When they take a break Safaree and Yandy finally have time to sit down and have a conversation. Yandy asks what’s going on with the record. Safaree tells her “I’ve finished it.” Yandy gets upset. She says “How can you have finished it when I haven’t had a chance to approve any of the artists?” Safaree tells her “It was my record and I was doing the remix. I didn’t need your approval, Yandy gets angry and storms out.

Remy is debuting her new single “Pretty Brown Eyes.” Papoose and all of the record labels chare excited. She tells Pap “Everything is coming together babe.”

The night of Safaree’s release party for the remix of Paradise. The drama pops off instantly When Anais shows up with Reuben  Rich is a bit shocked. Reuben approaches Rich and tells him “Hello Rich. I  just wanted you to know there are no hard feelings. I didn’t know you and you didn’t know me, but Anais and I are back together.” Rich shakes hands with Reuben and tells him “I think it’s great that you two want to work on your family especially since Anais wants to show her box to my boy Jacquee.”  Reuben looks pissed and wants to know who Jacquee is. At the same time, Anais goes over to explain what happened to Jonathon. He tells Safaree “We have to leave. You have to leave you invited vaginas to the party.”

Meanwhile, Safaree has his hands full because everyone is waiting ro hear the Paradise remix.Yandy is still upset that Safaree is not going to give her producer credit.  Safaree asks her “What’s your problem?”  Yabdy tel ls him “I don’t have a problem as long as the money raised doesn’t go toward another gold chain.” Safaree looks really upset at her words.  When Safaree steps up to debut the song he asks Yandy and a few others to step on the stage. The song is a hit and everyone loved it. Brie is not happy when she hears that she has been replaced on the track by Kyanne. She tells Safaree “You have wasted my time and replaced me with this whack girl!

She steps up and goes off on Kyanne. Kyanne and Brie are shouting at each other and it gets very heated. Brie shouts at Kyanne as she is being from the club by security and Kyanne tries ro leap off the stage at Brie. Yandy watches on in horror along with everyone else in the club.