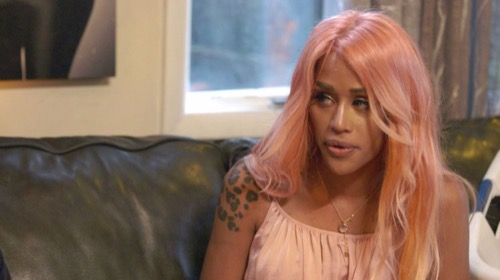 Tonight on VH1’s hit series Love & Hip Hop New York returns with an all-new Monday, December 10, 2018, episode and we have your Love & Hip Hop Atlanta recap below for you.  On tonight’s season 9 episode 3, “I’m Telling,” as per the VH1 synopsis, “Anais Has Enough Drama of Her Own. With two kids and a struggling music career, Anais pleads for her husband Ruben to be more supportive.”

Yandy and Juju are sitting together, catching up on the drama at Jonathan’s party. Juju doesn’t like how they all think she is secretive because she didn’t talk about her break-up.

Rich is at a music event with Jaquae. He tells him how Nya is coming. Rich doesn’t like her but he will be good to support his friend. He tells Jaquae all about some new talent he has.

Jonathan has invited Anais, Kimbella and Can for drinks to clear the air. Jonathan gets right into it and tells at Anais about messing with Juju. Anais was just trying to stand up for him. They get into it, yelling at each other. Anais leaves with her drink on the rooftop elevator. He and Kimbella get into it next. She tells him she is cutting the fake out of her life and leaves.

Juju is angry she was dragged into the drama at the party. She goes to visit Papoose and Remy Ma. Remy has put aside some clothes for Juju. It is from her own clothing line. Juju tells her all about the drama.

Rich meets with his new artist Sidney. He thinks she is messy but she might have the “it” factor. Jacquae meets with them. She calls him Jaguar. He corrects her. They listen to her rap and her lyrics share that she is transgender. Jaquae is taken aback.

Anais is stressed out with her family. Her kids and Rueben. She needs a break and she is fed up over her career. She is afraid she will never be a success.

Sidney meets with Byron, a friend. He has been very supportive. They talk about Rich.

Sidney is afraid Rich might not to walk with her because she is trans. Meanwhile. Kimbella comes to see Juelz in the studio. He tells her he is looking at double time in both scenarios. She gets upset. He doesn’t know what he is going to do. She is mad because she feels like he has never suffered the consequences because of his drug addiction.

Remy and Juju meet with Yandy to talk. They talk about how they were both quiet about their break-ups and signing papers. When things get a little heated, Remy stops them. It is time for a cheeseburger.

Nya Lee hits the stage to show her off her new track with Jaquae. Rich shows up. Nya comes to say hi with Jaquae. She makes a comment about how he runs his messy business and how he sleeps with his artists. Sidney shows up. They get into it. Rich turns Sidney around and they head to the bar. Jaquae comes to tell her she needs to shut it down. She can’t be like that to Nya.

Kimbella and Juelz head to the court so Juelz can give his decision. Later, they come out. Juelz took the plea to make it easier on his family. On the ride home Kimbella tells him he needs to stop being in denial over drugs. He doesn’t think it is about that. He is in trouble for a gun charge. They argue about the past.