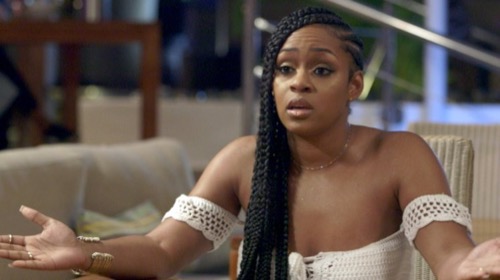 Tonight on VH1’s hit series Love & Hip Hop returns with an all-new Monday, February 5, 2018, episode and we have your Love & Hip Hop recap below for you.  On tonight’s season 8 episode 14, “St. Maarten Part 2,” as per the VH1 synopsis, “Bri and Kiyanne come face-to-face and things go completely left. Jaquae spends the night with an unexpected person. Remy tells Mariah she has to think over the collab. Jaquae tells Kiyanne about his spending the night with somebody.”

This week on Love and Hip Hop New York the group in St. Martin is enjoying a little play time. Jaquee and Safaree are exploring the island on quads. Safaree tells Jaquaee about Anais coming to confront Yandy. Jacquee says “I don’t know how to keep up with all the people who have a beef with each other.” He asks Safaree “Who are you going to put on the record?” He tells Jacquaee “I want Mariah and Bri.” They move on to talk about the women in their lives. Safaree says “I want a woman who’s about handling her business. I can’t see JuJu fighting.” Jacquee agrees.

Remy is in the studio working on shooting her first video for her single. She is happy and excited, but she is also worried about worried about collaborating with Mariah.

Brie meets up with Jacquee to talk. He tells her “I am excited to get this track down, but I have to tell you that my lady Kyanne is in town.” Brie is not happy to hear this. She asks him “Kyanne is your lady?” Jacquee says “Yeah she is and she’s coming to visit.” He wants to know what the issue is between the two ladies. Brie tells him “I don’t really know her except on Instagram. I posted some raps and she was mad.”

As the two are talking Kyanne walks up and joins the table. The tension between the two ladies is so thick you can cut it with a knife. Jacquee tries to diffuse it and quickly introduces the two ladies. Kyanne isn’t having any of it. She tells him “I didn’t know that she was going to be here.” Brie tells her “I don’t even know you.”

Kyanne says “You posted on Instagram that you taught me to rap.” Brie fires back and says “I never said anything about you. I put that on my grandmother.” Kyanne says “She’s about to die.” This sends Brie into a blind rage and the fight is on! The two women end up fighting and have to be separated by security and Kyanne runs off down the beach.

Rich meets up with his mother to talk. He tells her about a diabetic episode during which he had a seizure. She worries about his health. She tells him “Don’t cheat with your health. Cheat with your women if you must cuz that’s what you do.” Rich then tells her briefly about his affair with Anais. He tells her “The situation was presented to me differently.” His mom says “No. Just because she thought it was ok for her to do doesn’t mean it was ok for you to do.”

The next day Mariah meets up with Kyanne. They talk about the incident with Brie. Mariah tells her “As your friend, I have to tell you that you were wrong.” As they were talking there is a knock on the door and Jacquee walks in. Kyanne tells him “I wanted to apologize to you for popping off the way I did.” He tells her “I know you’ve had a hard time, but you can’t go around acting like that.” Kyanne then asks him “Where did you stay last night? You never came back to the room.” He tells her “I got a room and chilled with my friends.”

On the last day in St. Martin Yandy decides to throw a dinner for everyone who came to help out. Yandy reveals that Anais wasn’t in her room. Jacquee says “She was with me.” Everyone is surprised to hear this. Jacquee quickly says “Nothing happened.” When Anais joins the table she tells them “I feel like ya’ll are the evil stepsisters and I’m Cinderella.” Yandy tells her “You’re the one who wanted to come here and party. We didn’t come here for that.” Anais says “I wanted to have fun. “ Jonathon speaks up and says “We didn’t come here for that. There is a time and a place for that and this was neither the time nor the place.” Anais is not happy that Jonathon has taken Yandy’s side so she storms away from the table.

As if that wasn’t enough Mariah and Brie decided to relive their beef as well. Yandy tells them “Bianca is not here because of her actions and it’s unfortunate.” Mariah speaks up and tells Brie “When I hear you coming for my best friend I felt I had to speak up.” Brie tells her “Our mothers are in the same situation.” Mariah disagrees. Yandy steps in and tells Brie “Hold on Mariah is just trying to say that your parents are in the same situation and that you have something in common.” Mariah tells Brie “With that being said when we get up from this table we will no longer have beef.” Everyone applauds.

Everyone is home from the island. The creep squad meets up and Jacquee reveals that he spent the night with Anais. Rich has decided to be done with Anais and he congratulates Jacquee.

Remy meets up with Mariah and tells her “I can’t collaborate with the Mariah that came to that sit-down and acted a fool.” Mariah understands. She tells Remy “Had they come to the meeting with a different, more apologetic vibe then things might have been different, but Brie apologized to me while we were in St. Martin and I accepted her apology.” Remy is surprised by this. She commends Mariah for doing the right thing and ends ending her feud with Brie. She then asks her “What do you think Bianca is going to say when she finds out that you and Brie have squashed things?” Mariah says “I don’t think she’ll be happy but it’s time to let Bianca fight her own battles. “ Remy tells her “It’s important to have your friends backs, but sometimes being a good friend means knowing when to tell them they are wrong.”

Jacquee and the creep squad are meeting up at the park for a workout session, but before he can work out he has to confess to Kyanne about his night with Anais. The rest of the group watches while Jacquee confesses. He tells her “After the fight between you and Brie I was Anais. She showed me her boobs.” Kyanne gets pissed and storms off. Jacquee runs after her. He tells her “I don’t want anyone but you. I want us to be together.” Kyanne is not hearing it. She tells him “I look like a fool because of you.” He tells her “I love you. I don’t want her, I want you.” Kyanne tells him “Fix it yourself without me because you messed it up without me.”