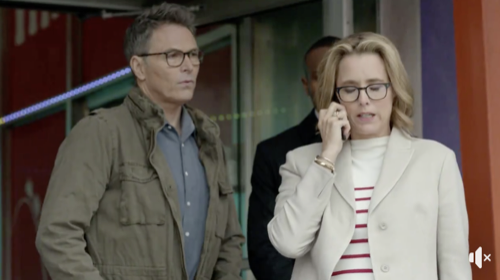 Tonight on CBS Madam Secretary airs with an all-new Sunday, May 20, 2018, season 4 episode 22 called, “Night Watch and we have your Madam Secretary recap below. On tonight’s Madam Secretary episode, as per the CBS synopsis, “Elizabeth and cabinet members brace for the fallout at home and abroad as President Dalton prepares for a retaliatory nuclear attack on a country that has reportedly just launched missiles bound for the U.S.

The whole family sits on the steps of the Lincoln monument in DC. Henry is annoyed they are all on their phones. Meanwhile, Jay and Matt play tennis while Daisy walks the dog and the baby in the park. She meets a single guy who is also walking his dog. Russell, Ellen, and Dalton play golf.

Kat is in the kitchen grabbing food when Blake offers to help her write her 500-page dossier. Dalton gets a call on the course that Russia is in the middle of bombing them.  Missiles will strike the mainland in 20 minutes. No-one can get in touch with Liz who is now playing video games with the family. Jay gets texted. He leaves Matt to get to work. Meanwhile, Ellen, Russell and the others encourage Dalton to strike back.

12 hours earlier – A man Dave is with his mistress when he is served divorce papers by his wife Angie. Dave, a general, takes a call from Dalton. He confirms that he wants to strike. Dave has trouble putting in the code. He is unauthorized. An official pulls him off the mission telling him it has to do with his divorce.

Dalton speaks with another general and gives his code confirmation to launch missiles. Russell finally gets in touch with Liz. He tells her Dalton commanded major attack option one. Secret service tells her that there is a helicopter on the roof waiting for her. She tells them she is staying with her family.

A general comes running into the command center and yells abort, pushing a general at the button aside.

Gordon reports to Dalton that General Bradley ran a simulation to test his men. He forgot to shut it down. Dalton cannot believe he almost launched an attack because of Bradley’s screw up. Liz thinks a policy change is in order when it comes to nuclear war. George and Ellen argue with her. We need to be at the ready. Russia is. Liz points out that we have plenty of other ways to defend ourselves. Gordon calls her emotional. Russell sides with Liz.

That night, Liz and Henry talk after dinner about what they each were thinking while they were waiting. Dalton calls Liz. He is outside. He comes in and talks to Liz and Henry. He talks about doing everything they can to make sure the policies make sense. He wants to push for a new treaty that makes them all de-alert their missiles.

Blake, Daisy, Kat, Jay, and Matt all meet for drinks. Matt thinks Jay is on the list for Mount Weather. Jay doesn’t confirm he is on the list, just details what it would be like to be on the list.

Liz flies over a thousand miles to meet with a Russian official. She tells him she wants to discuss de-alerting and maybe reducing their own stockpiles. She hands him a report. They could start now.

Back at the office, Gordon meets with Liz. He thinks she is giving Dalton bad advice and threatening national security. She asks him what she can do to get him to work with her. He tells her he will never get behind de-alerting.

Back at home, Stevie is annoyed that Russell won’t tell her she can have a couple of days off to go to a wedding. Liz erupts, telling her Russell has too much going on to deal with her request for time off so she can attend her spoiled friend’s wedding. Henry whisks her away. They talk. He gives her an idea.

The next day, Liz tells Dalton and Russell they need to get the public involved. Later in the day, Dalton holds a press conference in the oval office addressing Americans about the crisis and de-alerting.

Kat watches the news as they announce that America has formed a treaty with Russia to de-alert their missiles. Blake comes in. He finished the dossier and wants more.

Daisy takes her walk in the park while Jay and Matt play tennis. Back at home, the kids and Henry play video games.

Liz plays golf with Dalton and Russell. Ellen and Gordon aren’t there. They are still upset about the treaty. Dalton thinks they will come around.

Liz tells Henry on the steps of Lincoln’s monument that she wants to run for president. He tells her he knew that and he is with her.