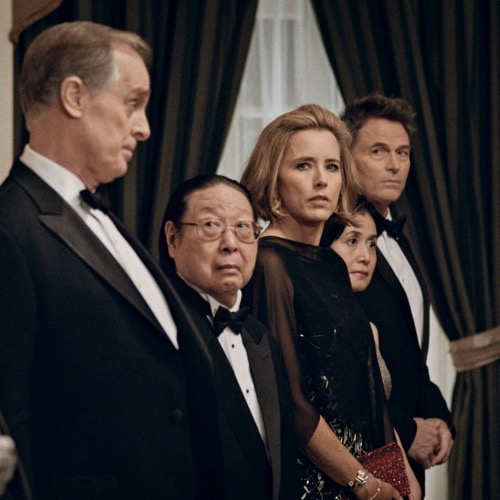 Tonight on CBS Madam Secretary airs with an all-new Sunday, January 14, 2018, season 4 episode 12 called, “Sound and Fury” and we have your Madam Secretary recap below. On tonight’s Madam Secretary episode, as per the CBS synopsis, “After President Dalton hears about a sonic attack at the U.S. Embassy in Bulgaria, he thinks Russia is to blame and uncharacteristically threatens them with military force, leaving his cabinet concerned about his mental status.”

The US Embassy in Bulgaria is conducting business as usual when high pitched ringing causing everyone to cover their ears. Windows blow out. Everyone runs. Meanwhile, Liz and Henry are all dressed up for a formal affair. Kat comes to get her. She meets Russell and POTUS in the Oval. POTUS thinks it is a sonic attack and the Russians are behind it. Security comes in. POTUS was right. They all head to a press conference to address the situation. POTUS threatens Russia with ferocity and might. Liz and Russell don’t know what to do but try and contain the damage.

Liz meets with her team so they can get to work. Liz speaks by video with Russia’s Foreign Minister. He is irate and not willing to hear what Liz has to say. Liz heads home and updates Henry. Before she heads to take a bath, they hear a ruckus in the basement. A pipe has burst due to the severe cold. The next day, Henry and Liz deal with their plumber who gives them a lecture on structural integrity and learning from their mistakes. Henry wants to punch him. Liz gets a call from Daisy. POTUS wants her in the situation room.

Henry meets with his team. POTUS wants them to provide clarity. Meanwhile, Liz meets up with Russell who is stressed out. He cannot talk the president down. In the situation room, POTUS wants the military to shoot out Russia’s satellites now. The National Security Council isn’t comfortable. The director tells POTUS he will not obey. Conrad fires him (Becker), hires Robert and ends the meeting. Liz tries to talk to him but he isn’t hearing what he has to say.

Liz, Russell and the others hold a secret meeting at Russell’s house that night. They all agree to make a pact since POTUS is acting dangerously. Robert isn’t comfortable. They have 24 hours before the missiles are launched. They decide they need to find a way to delay it.

The kids are going through all of the boxes and find their baby books. Jason’s isn’t filled out. He is mad.

Liz pays a visit to Conrad’s wife, Lydia. She tells her what is going on. Lydia looks surprised. Liz heads home to see Henry stressed about the possible sonic attack.

Henry and his team report to POTUS to tell him that it was not an attack by Russia. Conrad gets enraged and demands they carry through with the missile strikes. He dismisses Henry and the others. Liz asks him if he is well. She is concerned. He tells her he is the damn president and not to question his authority.

The VP, Liz, Russell and all of the heads meet to vote on whether or not to remove Dalton from office. The whole room is unsure. Meanwhile, Henry sits with Jason as he plays video games. He explains that Jason was a 9/11 baby. They didn’t have much time to document his milestones, but that doesn’t mean he was any less important than the girls. All of the heads leave the room. Liz declares that it is done to Russell.

Russell and Conrad enter the situation room to find Lydia and Liz. Russell informs him that he has been removed from his position. Lydia tells him she loves him. He isn’t well. He is angry. He tells Liz and Russell he is the reason why they are there. He needs to be examined and then maybe he can be reinstated.

At home, Liz and Henry fill out Jason’s baby book at the table. He comes down the stairs and spots them, asking them why they are doing this now. Liz tells him that they almost lost the baby book to water damage. They all sit together and tease him lovingly.

Lydia and Russell meet with the president’s doctor. He has a malignant tumor pressing against his frontal lobe. With some steroids and surgery, he will be back to new in no time.

The next morning, everyone visits Conrad. He apologizes repeatedly to Liz for what he put her through. They head to a press conference where Dalton hands down his powers to the VP while he undergoes treatment. He emphasizes the importance of the constitution and democracy.