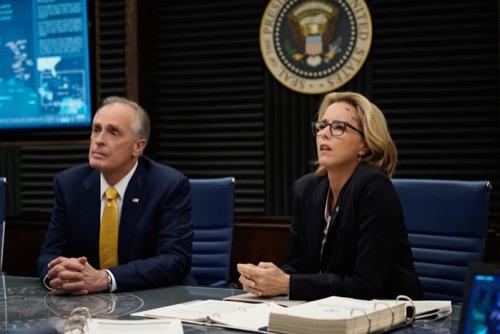 Tonight on CBS Madam Secretary airs with an all-new Sunday, November 25, 2018, season 5 episode 8 called, “The Courage to Continue,” and we have your Madam Secretary recap below. On tonight’s Madam Secretary episode, as per the CBS synopsis, “When Haiti’s democracy is threatened by a president who refuses to step down after losing the election, Elizabeth tries to solve the problem without resorting to military action. Also, Blake has one week to find a new job before Elizabeth fires him as her assistant.”

Blake arrives at work and listens to his music, singing and getting a few things done when a reminder pops up that he is fired in 3 days.

At home, Liz and Henry talk over breakfast about President Galbert’s (of Haiti) upcoming visit. Henry tells her their estate planner called. He wants to make some changes.

President Galbert turns down aid in a meeting with Liz and Jay. He is ready to begin a new day for Haiti. Jay thinks it is a bad idea while Liz is impressed.

The team is called together. They watch media reports that a high up military official DuPont of Haiti has called President Galbert a puppet who is meeting with the US. Fights are breaking out. Liz tells Blake to notify the White House she is on her way. They are going to have to deal with this if President Galbertis exiled.

At the White House, Dalton tells Liz they need to boycott DuPont’s regime to get President Galbert power back.

Jay tries to coach Blake through an interview. Blake is having trouble. He needs self-belief. Meanwhile, Liz and Henry get a call from their estate planner who tells them Arlington Cemetery is filling up. Liz tells Henry he needs to be buried there but she isn’t sure if she should be.

Liz finds out last minute that Dalton has decided to strike Dupont and Haiti. She goes to see him. He tells her he was trying to keep her out of it so it won’t affect her run for president. She asks for 48 hours to get Dupont to step down and then he can send in the marines.

Liz calls Monaco to see if they will offer refuge to DuPont. They will at a price. Meanwhile, The writer Matt has been hosting is driving him crazy and just when he plans to tell him to buzz off Daisy tells him Danny’s father has been killed in Haiti.

Liz and Henry attempt to talk to the kids about their burial. It doesn’t go well. Liz is called to the White House. DuPont doesn’t want her offer of imprisonment in Monaco. His soldiers will fight to their death and he will lead them.

Blake pours his hurt out to Bob the janitor who tells him he needs to have confidence. Liz comes out of her office and asks him to bring her to a briefing. He attends as she talks to the president. He offers some helpful information as to how they can make DuPont powerless by pulling financial backing from him.

As President Galbert talks to the Haiti soldiers via video, Jay tells Liz that DuPont has locked himself in a building. They could have a bloodbath on their hands. After some back and forth, DuPont publicly retires after his family is given safe passage to Monaco with him.

Liz calls Blake in and fires him and rehires him as a policy advisor. At home, she tells Henry she has been avoiding dealing with their estate planning because she doesn’t like the finality of a gravestone. She has never visited her parent’s graves. Seeing their names would be so final. He tells her she doesn’t have to do it alone. They go as a family to her parents’ grave.