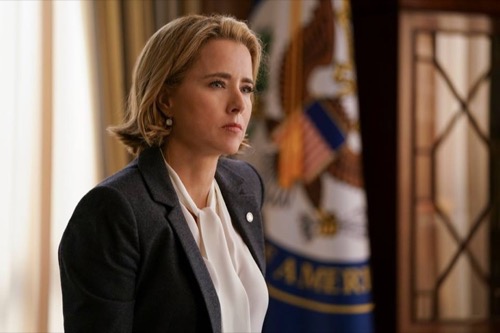 Tonight on CBS Madam Secretary airs with an all-new Sunday, March 25, 2018, season 4 episode 15 called, “The Unnamed” and we have your Madam Secretary recap below. On tonight’s Madam Secretary episode, as per the CBS synopsis, “Elizabeth and the team are caught in an uncertain situation when they are about to award a foreign leader with the Medal of Freedom but learn he may have known that a minority group in his country is being persecuted. Also, President Dalton doubts his ability to return to office after being cleared by his doctor, and a past family grievance is brought to light when Henry’s sister pays a visit.”

Ten years prior, Conrad gives a speech as he runs for the governor of California. Fast forward to present day, Conrad is checked out by his doctor. If he passes he will return to his position as POTUS. He seems unsure if he will take the oval again.

It’s the morning grind. Liz and Henry talk to Ally about her aunt coming to visit. She wants to see an art exhibit. Liz heads off to work. The once imprisoned President of Burmese has come to DC to be presented with the Medal of Freedom. Liz and the others welcome him in front of the White House. He has a screaming group of fans who all admire him.

Russell goes to see Conrad. The president tells him that he isn’t ready to sign the papers to return to office. He needs more time. Later that morning Liz’s team all dart at her as soon as she gets off the elevator. They want to know about Conrad. Meanwhile, Kat reports on a UNICEF issue. Muslims in Bermise are fleeing to the border. They meet with the Burmese president but he isn’t too concerned and evasive about the humanitarian crisis.

Maureen shows up. She has a gift for Ally. Henry tells her that Liz won’t make it home for dinner. Maureen is oddly agreeable.

Kat does some research on the violence going on with the Muslims in Burmese. She is told that they want to keep the violence quiet while their president accepts the medal. Liz tells the acting president and Russell. Russell tells them they need to make the decision now and not wait for Dalton.

Dalton walks with his wife at Camp David. He tells her he isn’t sure he should return yet. He thinks back to his run for governor. He gets a call. He needs to get to LA. He has an emergency situation. His campaign manager is angry. He has a debate in 2 hours. He heads to the hospital to see his brother. He has been missing for 3 years. He was in a violent altercation at a men’s shelter. He is an alcoholic who is schizophrenic. Conrad enters the room and gives his brother a drink of water. He asks him where he has been. He is loving and kids with him, calling him a dumbass.

Kat reports back to Liz. She brings proof of the violence occurring in Burmese. Is the president they are about to award responsible for the violence? Liz goes to visit the president in his hotel room. She asks him what is going on? He explains that his military is trying to combat extremism. Liz tells him that there is another way.

At lunch, Maureen makes a comment about how Henry was given more money to go to college than she was given. Henry sets her straight. Their father lied to her to keep her home. He was ROTC. He paid all of his own loans. Maureen is dumbfounded.

Liz meets with the acting president and Russell. They don’t know what to do about the humanitarian crisis. Suddenly, their acting president doesn’t want to act. Liz wants a straight answer about Conrad. Russell explains that he thinks Conrad might not want to be president anymore.

Liz heads to Camp David. She talks to him about returning. Conrad talks about his brother hearing voices. He tells her he almost called a strike on Russia. Liz tells him to take more time if he is unsure. She has one request though –

Ten years prior, a young Russell meets with a young Conrad. Russell talks him into staying in politics. Russell tells him they all have family issues.

Present day, Conrad comes to meet the president of Burmese. He wants to help him with his refugee issues. He gives him a much-needed speech on democracy and finding his voice as a leader.

The next day, the foreign president gives a great speech supporting all of his people. Conrad returns to the oval to sign in as president with his brother John there.