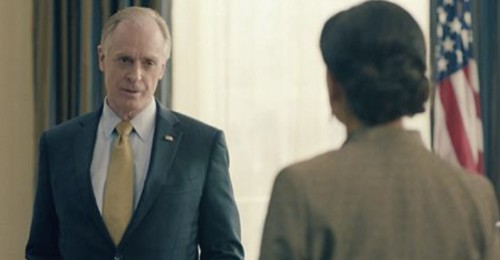 Tonight on CBS Madam Secretary airs with an all-new Sunday, April 22, 2018, season 4 episode 18 called, “The Friendship Game” and we have your Madam Secretary recap below. On tonight’s Madam Secretary episode, as per the CBS synopsis, “Elizabeth’s negotiations for a security agreement combatting gang violence in South America becomes complicated when she attempts to free an American recently kidnapped there.”

Liz and Henry come home after a formal dinner. Liz’s feet are on fire from her heels. They sit. She tells Henry she isn’t any fun again. He disagrees. They talk about their lack of friends and social life outside of their jobs.

The next morning, Liz meets her team. They discuss gangs in Central America and those who flee to the US to live safely. Later, Matt’s mother won’t stop calling him. He has broken up with his girlfriend because she is moving for a year abroad. He is upset. Daisy and Blake think he has made a big mistake. He tells them that long distance relationships never work.

President Tejeda meets with Liz to ask her if she can supply her country with their aid package ahead of their security agreement signing. Liz tells her she cannot. The president is not happy.

Dalton is holding a press conference. He signs the Central America Security Agreement. Right after the signing, President Tejeda Liz has been told that a gang in Central America have taken a group of NGO workers hostage. They want $30 million.

Henry meets with Piper’s dad to get a book for Jason. They make plans for them to meet up for dinner.

Jay meets with an American family whose daughter has been taken by the gang. They want to know when the US will pay the ransom. Jay explains to them that the US does not pay for hostages. They cannot believe what he is telling them. The mother begins to cry. Jay tries to reassure them that he will do all he can. His words do nothing to comfort them.

Jay and Liz talk about the family. Jay is upset about the situation. Liz tells him to take a walk and let off some steam.

Home for dinner, Liz and Henry catch the news. President Tejeda is carrying out a widespread search and detain to try and free the hostages. Liz thinks she may push the gang too far and they could kill the hostages.

Liz comes into the office in the morning. Jay tells her that the boss of the father of the American girl being held hostage wants to pay the ransom. Liz hopes the gang complies.

Liz is late to arrive for dinner with Piper’s parents. Piper’s mother asks about the hostage crisis. Liz doesn’t offer much. They move on to the next subject and laugh. Things become light-hearted and fun.

Matt meets a woman his mother set him up with. Meanwhile, Liz and Henry bring Piper’s parents back to their house for drinks. Blake calls. The man who is willing to pay the ransom can’t seem to find the correct place to send the money. He is irate. After he leaves, Liz heads back to the kitchen. Piper’s parents have left out the back door. She heads to the office. As they dig into the issue more and more they realize that the whole thing was a set up by the president so she could look like a hero.

Liz and Dalton video with the president. She denies all wrongdoing. Meanwhile, Matt is having a great first date talking about Iron Man. His date sees her ex. He comes up to them. He cannot believe she has moved on. They fight back and forth. They were supposed to marry but he would never be accepted by her parents. He is not Pakistani. Matt stands awkwardly by while they go back and forth.

Dalton, Russell, and Liz watch the news and see President Tejeda take all the credit for saving the hostages. They aren’t sure they can work with her anymore.

Liz holds a press conference and reports that the president was responsible for the hostage situation. Meanwhile, Matt tells Blake and Jay about his night. He tells them how he told his date and her ex that they need to risk things for their love. What if they never find love again? Blake and Jay cannot believe he cannot hear himself. Matt realizes what he is saying and goes to his ex’s apartment. He catches her before she leaves. He tells her he wants to take a chance on them and try a long distance relationship. They kiss.

Henry and Liz bring a gift basket to their old friends who are giving them the cold shoulder. It is awkward at first. They all smile and they are invited in.