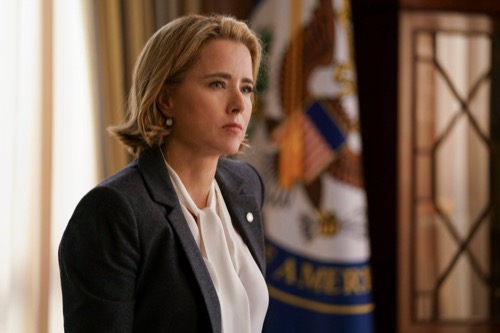 Tonight on CBS Madam Secretary airs with an all-new Sunday, April 8, 2018, season 4 episode 17 called, “Phase Two” and we have your Madam Secretary recap below. On tonight’s Madam Secretary episode, as per the CBS synopsis, “Sen. Morejon puts phase two of Elizabeth’s U.S.-Iran arms deal in jeopardy when he asserts that Iran funneled money from phase one of the deal to fund a recent bombing that killed an American citizen. Also, Henry mulls over the option of becoming the chairman of the new military ethics department at the National War College.”

Four months later, Liz and the family sit for breakfast. The news is on. Jason watches as Senator Morejon criticizes the White House, particularly Liz, and their policies. They are the reason this bombing occurred and innocent people died. He blames Liz’s U.S./Iran arms deal, claiming that Iranian government funneled money from phase one to fund the bombing.

Russell, POTUS, and Liz talk about what they can do with Iran who is funding their enemies. Russell is very impatient. He wants to know what they can do to speed this up. Liz tells them that they want in on the SWIFT banking system. POTUS agrees to discuss it to move them forward.

Henry meets with a US General. He wants Henry to lead the chair of the Ethics Department. Henry tells him he needs time to think. He really just wants to get back to teaching.

Kat updates Liz on the Iranian deal and the news that the Saudi’s are not happy. There is an official in her office and he looks mad. Liz meets with him. He wants the missiles that the US promised his president. Liz is angry that he would demand weapons on his own timeline. He reminds her that the US owes them a favor.

That night, Liz and Henry talk about their day. Mike B. shows up. He tells her she is being sued by the parents of a young man who was killed in the bombing.

In the oval the next morning, Mike B. meets with Liz, POTUS, and Russell. They discuss what to do with Liz’s current situation. Mike tells Liz that she needs to dodge being served.

Henry arrives to see the General about the chair. He meets a man who refers to him as the Mr. Mrs. Madam Secretary. Henry learns that the man is also running for the chair. Henry quickly changes his mind and tells the general he is interested.

Liz is on the Trevor Vance Show sharing her side of the Iranian deal. Vance shows footage of the family of the young man who was killed.

Vance then questions Liz’s clarity about Iran. She does her best to defend her view. After the show, a man tries to talk to her. Secret Service grabs him when he reaches into his coat. Someone in the crowd records the incident. The man is a processor trying to serve her. The video becomes news.

At home that night, Jason reminds Liz about National Merit Scholar award. He asks her if she will miss it. She laughs. She won’t miss it.

Liz meets with POTUS. He wants to put the Iranian deal off. She warns him that there will be no deal if they wait. He tells her that is what he wants to do. Liz leaves disappointed.

Liz attends Jason’s award ceremony. The processor is there with an injured hand. She cannot dodge him any longer. She accepts the paperwork and apologizes to the man for his arm.

At home that night, Mike B. is there when they arrive home from the ceremony. He tells Liz and Henry that someone very powerful in Saudi Arabia is paying the law firm for the family suing Liz. Liz visits Senator Morejon the next morning. By the look on his face he already knew, she determines. He tells her that the enemy of his enemy is his friend. Liz is disgusted. She leaves.

Henry and Liz take a walk through the park as the Secret Service follow them. Henry tells her he did some digging on his opponent for the chair. The man lied about his time at the academy. Liz tells him to do what he thinks is right.

Mike goes over what Liz needs to say in court. On a loop, Liz repeats how she will take the 5th as an executor officer of the USA. She cannot help but think about the poor kid’s family. They really don’t know. She heads to the family’s home. She tells them that their son worked for the CIA. That he died a hero. They sit in shock.

Mike B. arrives the next morning. He cannot believe that she managed to get the family to drop the lawsuit. She explains that was not her intention. She just wanted to do what she thought was right.

Henry sees his opponent outside of the general’s office. He tells him he knows that he didn’t graduate from the academy. If he fixes the oversight then he won’t report him. His opponent is taken aback. He thanks Henry for being so forgiving and ethical.

Liz meets with the Saudi official again. He wants his missiles. Liz tells him that she will give him what he wants when his country ceases their fire in Yemen.

Henry kicks off his first Ethics meeting. Meanwhile, Kat meets with Iranian leaders who give her the whereabouts of a reporter taken by the Boko Harem. She is glad they are all back on track.

Liz watches as the family of the CIA agent who died in the bombing looks at his star on the memorial wall.