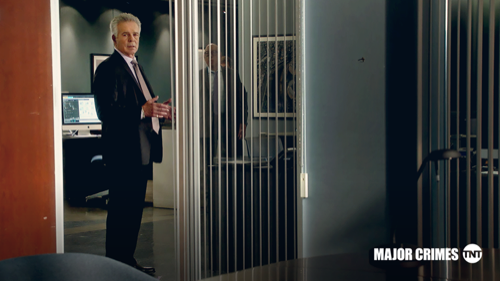 TNT Major Crimes airs tonight with an all-new Monday, January 2, 2018, episode and we have your Major Crimes recap below!  On tonight’s Major Crimes season 6 episode 12 as per the TNT synopsis, “In the penultimate episode, Phillip Stroh and his young British accomplice edge closer and closer to their end game, while Lt. Provenza continues to push Asst. Chief Leo Mason into pouring more resources into the case. Rusty digs up an important clue”

The show opens with the team freaking out because the video has been deleted. Buzz realizes that their system has been hacked. Stroh has been watching and listening to them on their cell phones. Buzz discovers that the kid who said he lived next door to Rios sent them a photo which infiltrated their system. They review his photo and realize he is the same man who went to visit Stroh’s mother. The team decides to play Stroh and start feeding him false information. The only place the team can talk without being overheard is Louis’ office. Ray tells Louis that he has sent the neighbor kid’s photo (Dylan, who they now know is Stroh’s accomplice) to be processed into a facial recognition program. He has also learned that Stroh is not dying from cancer.

Dylan tells Stroh that all of his mother’s money is now under Stroh’s step-brother, Hunt’s control. Stroh needs him to get a copy of the floor plans of Hunt’s house and a copy of his calendar. Hunt is well guarded so Stroh needs a plan on how to get to him. The facial recognition program gives the team Dylan’s name and they continue to try to work on him. The team plays up all of the people and accomplice’s Stroh has killed in hopes that Dylan will turn on Stroh. Dylan and Stroh follow Hunt so that Dylan is can hack into his phone. He is able to clone Hunt’s phone and now Stroh has his calendar and passwords.

Rusty calls Mary Wellington’s mother and learns that Gwen sent her and her family money for many years. Rusty shares this information with the team and they discover Gwen paid many of her son’s victims and families throughout the year. The team starts to talk about discovering who Dylan is and he freaks out. He wants to leave the country immediately but Stroh convinces him they only need one more day and then they will have everything they need. The team sets up a fake tip line telephone number hoping Dylan will download the information. If he does they will be able to track him down.

Stroh discovers that Hunt has an appointment the next day at 9 am and plans on ambushing him when he arrives. Once he can get his mother’s money from Hunt he and Dylan can disappear. Rusty and Gus talk about what is motivating Stroh. Gus begs Rusty for another chance. The team realizes that Stroh has been trying to find his mother because his money had been cut off. He wasn’t getting revenge. He was tracking down all of the people she had been paying off trying to get information about where she was. When they couldn’t give it to him he killed them.

Hunt goes into his therapist’s office without his bodyguards and finds him dead. Stroh puts a knife to his throat and says he is there for his money. He makes Hunt log into his bank account and transfer money into Stroh’s account. Once the transfer begins Stroh kills Hunt. Louis realizes that if they lose Stroh this time he will be gone for good.