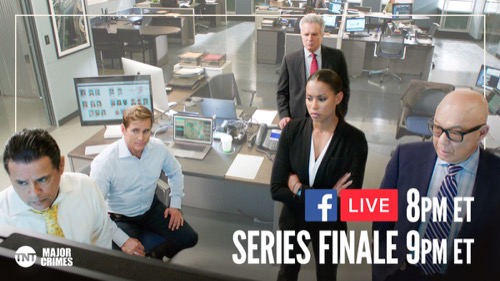 TNT Major Crimes airs tonight with an all-new Monday, January 9, 2018, episode and we have your Major Crimes recap below!  On tonight’s Major Crimes season 6 episode 13 as per the TNT synopsis, “In the series finale, Lt. Tao is stuck in a room with a potential bomb; Provenza finally identifies the real Ms. Bechtal, and Major Crimes comes face-to-face for the very last time with Phillip Stroh.”

The show opens with the team entering the doctor’s office where Stroh killed both Sanford and his doctor. Not only did Stroh kill both men but he also wrote “Rusty is next” in blood on the wall. Louis decides that both Rusty and Gus will now be by his side constantly until Stroh is caught. The team decides to release details of Stroh’s accomplice to the media in hopes that he will click on the link that will give them his exact location. Dylan takes the bait and clicks on the link. Dylan transfers all of Stroh’s money to his account and then calls his girlfriend, Elle, to tell her to pack so they can leave the country. Stroh answers and tells him he knew he would try to double cross him. He puts a noose around Elle’s neck and tells Dylan if he doesn’t transfer the back immediately he will kill her.

Dylan begs Stroh to let him keep just $50,000 so he can escape but Stroh refuses. The team gets Dylan’s address and heads out to arrest him. The $15 million is transferred back to Stroh’s account as the team surrounds Dylan’s house. They break in and a gun battle ensues. Dylan is killed. The team sees Stroh on the video screen as he tightens the noose around Elle’s neck. He tells them they will never catch him and then smashes the screen. Louis gets Elle’s address and sends several police units to her house. They are able to save Elle and realize Stroh took her car.

Before Dylan died he had a timer set that would send all of the information he had on Stroh to the police if anything happened to him. The information is sent to the Major Crimes unit and based on what they find they think Stroh may be heading to a private jet that is reserved to leave the country in one hour. The Lt. sets up a perimeter around the airport but Stroh doesn’t show up. Rusty thinks he knows where Stroh may be. Rusty, Gus, Louis and Buzz head to Stroh’s step-sister’s Tammy’s house to see if she is OK.

She doesn’t answer the door at her house so they kick in the door. Louis and Buzz find Tammy’s dead body but Louis doesn’t call it in. He instead heads out to the marina and finds Stroh on Tammy’s boat. Rusty realizes where Louis is headed and follows him. Stroh and Louis come face to face. As Louis is about to take him into custody, Rusty comes out of nowhere and shots Stroh five times, killing him. Louis tells Rusty to go back to Tammy’s house. Rusty didn’t shot Stroh, Louis did. That is the story and they will stick to it.

Rusty learns that Louis will be interviewed but the shooting will be viewed as justified. Rusty and Gus reunited. The next scene is of Luis making a speech as he leaves Major Crimes to join a new unit that will give him more time with his son. Louis is cleared of any wrongdoing and Buzz is admitted to the police academy. Rusty reports that he has passed the bar and will be joining the DA’s office.