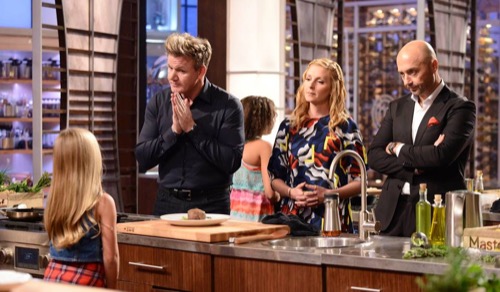 Tonight on FOX Gordon Ramsay’s Masterchef Junior continues with an all-new Friday, March 16, 2018,  season 6 episode 4 called “American Classics,” and we have your weekly Masterchef Junior recap below. On tonight’s Masterchef Junior episode as per the FOX synopsis, “The Top 22 split up into teams and must prepare as many perfect-looking milkshakes as they can in just 10 minutes. The winning teams will be safe from elimination and one unlucky judge will get a sweet surprise! Then, the rest of the junior cooks will each have to put their own personal twist on a classic chicken-and-waffles dish. It is then up to the judges to decide who stays and goes home.”

The cooks all walk into the kitchen and there is a giant milkshake. Gordon, Christina and Joe greet them and announce that not everyone will be competing in the challenge. For this challenge, there will be three teams of three home cooks. Everyone will grab a straw from Gordon and Joe – if they grab one with a color on the bottom, they are competing. If they grab a straw with no color they will head up on the balcony and cheer on their fellow home cooks.

On the red team there is Ben, Quani and Sammy. On the yellow team there is Anthony, Olivia and Henry. On the blue team there is Grace, Evan and Pierce. Christina shows them a picture perfect milkshake, the cooks have ten minutes to make as many stunning and flawless milkshakes as possible.

Only complete milkshakes will be counted. The best two teams will not have to cook in the next challenge, but not everyone will be safe, including one judge. One of the judges will be heading into the gigantic sized milkshake that is in the kitchen. The winning team with nine stunning milkshakes is the winning team.

Tonight the cooks have to put their own spin on chicken and waffles. The cooks head to their stations, they have 45 minutes.

Avery’s dish is first and she did a good job. Remy made an Italian version of chicken and waffles, Christina is impressed. Quani made his own syrup and it wasn’t great, his chicken was also over cooked. Cade did a Cajun version, he did good. Grayson’s doesn’t look good and doesn’t taste good. Ben made blueberry waffles, the chicken is good but the waffle is underwhelming. Camson’s chicken is perfect and the waffle spicy, Gordon loves it.

Ariana made a herb waffle and mushroom cream sauce with her chicken, Joe says it is a very good job. Mikey’s gets the vote for best presentation, Christina says it is a good job overall. Lindsay did smoked paprika chicken with cilantro whipped cream, her chicken is raw. Gordon didn’t like the dish.The second best dish of the night belongs to Ariana. The very best dish of the night belongs to Cade. Both Cade and Ariana will be team captains in the next challenge. Two cooks will be going home. Grayson, Ben, Lindsay and Quani are called to the front. Ben and Quani are told to go back to their stations. Lindsay and Grayson are going home.