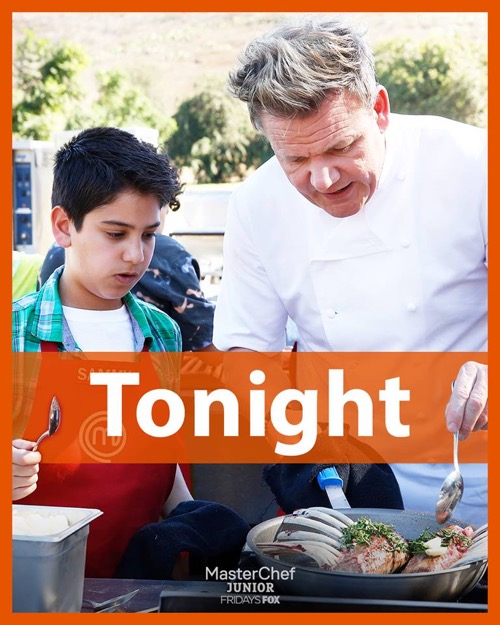 Tonight on FOX Gordon Ramsay’s Masterchef Junior continues with an all-new Friday, March 23, 2018,  season 6 episode 5 called “Recipe for Love,” and we have your weekly Masterchef Junior recap below. On tonight’s Masterchef Junior episode as per the FOX synopsis, “The Top 20 prepare lunch service for a wedding of 75 guests, consisting of racks of lamb and pan-seared halibut.”

The judges won’t reveal what the challenge is, but its offsite and they have to hurry so they are not late. The cooks head to a very large farm and two very special guests are going to tell them about their next challenge.

The specials guests are Whitney and Sam who are getting married, so the cooks are responsible for their food; there are 70 guests and this is the biggest Master Chef Junior challenge ever.

Whitney tells the cooks that she and Sam like Halibut and Rack of Lamb, so that is what they would like them to cook. There is going to be feedback from all the guests, but the winner and loser will ultimately make the decision. Gordon calls the cooks into the kitchen, he shows them how to cook the Rack of Lamb and Halibut. The sixty minutes prep starts, the cooks get into action.

Cade isn’t doing too well, neither is Ariana. Ariana looses it and starts yelling at everyone to get order on her side of the kitchen. The bride and groom are served, down two, 73 more meals to go.

Gordon loses it when he sees Ben cutting the lamb and the pieces are so small that he says he wouldn’t feed it to his bulldog. Gordon tells the red team to take off their aprons and go pick grapes, he is going to finish the service.

Gordon changes his mind and gives them another chance. Gracie abandons Sammy on the lamb, Cade should not have put her on it, she admits it is her weakness. The blue team is working like a well oiled machine, there is no stopping them. Sammy taking over on the lamb was great for the red team. The blue team serves up a raw piece of lamb.

Ariana is redoing the lamb and believes she owes it to her team to come through. Service is getting close to closing and the blue team has fallen behind. Cade admits that was the hardest thing hevhas ever done and even though there were some ups and downs they finished strong and finished before the blue team.

The blue team is done, Ariana feels torn – if that lamb didn’t come back she feels she would have had a sure win and now it is anyone’s game. There can only be one winning team and the ones that will be safe from elimination, will be determined back in the kitchen.

The cooks leave the wedding. Back in the kitchen, Gordon tells the cooks that one team went above and beyond with lots of finesse – the winner is the blue team. Gordon tells the red team that they were not on the same page and they are going to have to say goodbye to two people.

Joe calls the following cooks to take one step forward; Camson, Quani, Avery, Evan, Sophia, Sammy and Henry – they are all safe and head up to the balcony. That leaves Cade, Gracie and Ben. Cade is safe, Gracie and Ben are going home.