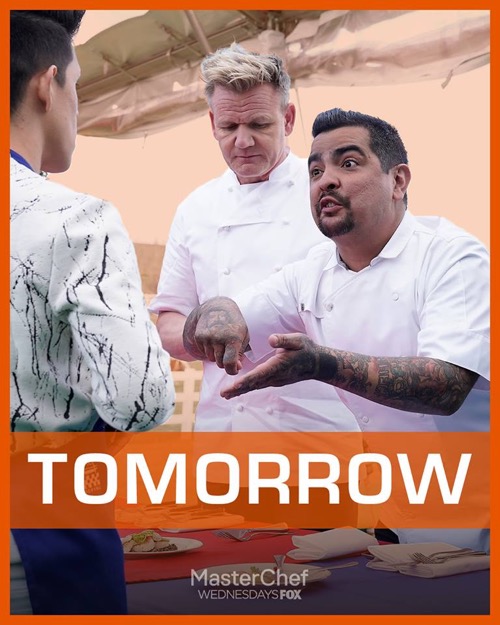 Tonight on FOX Gordon Ramsay’s Masterchef  continues with an all-new Wednesday, July 11, 2018,  season 9 episode 8 called “A Gordon Ramsay Wedding,” and we have your weekly Masterchef recap below.

On tonight’s Masterchef episode as per the FOX synopsis, “The contestants cook for “MasterChef” Season 7 winner Shaun O’Neale’s wedding, which Gordon Ramsay officiates. After splitting into two teams, the home cooks have limited time to prepare and cook 51 appetizers and 51 entrees for guests in attendance.”

For better or for worse, the remaining contestants had to team up on tonight’s all new episode of “MasterChef”.

The challenge tonight was a wedding reception. The Top 18 had to split up into two teams to cater the wedding of MasterChef winner Shaun O’Neale. He and his fiancée had taken the time to talk to everyone before the ceremony and they had both teams the protein they wanted. They wanted scallops as part of their appetizers because that was the first thing Shaun cooked for Katie and they also wanted their man protein of their main dish to be duck breast. Shaun loved it because he said that’s when its right there was nothing like it and so he cautioned everyone about making sure the duck breast come out alright. It needed to be cooked the whole way through and therefore the contestants were firmly put on notice.

Shaun had warned everyone about his wedding reception because he wanted it to go off perfectly and so it wasn’t until he had scared everyone that he and his fiancée went to go prepare for their wedding. The contestants on the other hand had to get to the difficult part. They had to be split into teams and so the judges chose team leaders. They chose Julia and Juni who were as different as night and day. These two home-cooks had a different approach to how they cooked and that even showed as they picked out their teams. Juni chose to go with a younger team that had a lot more ideas and Julia chose to go with a mature team that she knew would be great wherever they were stationed.

They both chose the team that represented the best, but then the judges decided to switch things up. They gave the Red Team to Julia and they gave the Blue Team to Juni. They said that the signs of a true leader was them being able to work with anyone and everyone. Which had left both Juni and Julia reeling. Julia tried to do her best with her team by firmly telling everyone what they were going to be cooking and not really listening to anyone while Juni tried to take a different approach. He threw ideas out there and no one gave him any king of feedback. They had each thought his idea was stupid and they didn’t say anything because he was the captain. The other team had tried to tell Julia some ideas and she shot them down because she said it was her team and she was captain.

These two styles of leadership would be great if they have gotten the teams they picked initially. With that not being the case, both team went on to make mistakes. Julia as captain had failed to realize they shouldn’t be seasoning her scallops before they even put them on the grill and she also hadn’t checked on those same scallops before they went out to the servers. People were saying they loved the flavor and that the only issue was the heat on those scallops. They wished they had been cooked a little more and so Ramsay brought that to their attention. He told them they were catering a wedding and had to get it together. And so they did just that because the rest of the scallops came out a lot better than the first ones.

The Blue team differed in the sense that they failed almost from the very beginning. Ramsay found out what they were cooking and had told them how dumb it was. He told them to have another meeting because he wanted better ideas from them, so they had to rearrange their meal plan within minutes. They were able to bounce back from that setback and would have been fine they hadn’t had another setback. They were supposed to serve puree and hadn’t pureed within moments of actually needing to serve people their food. Then there was the problem with the potatoes because Juni wanted to serve the duck with garlic mashed potatoes which was time consuming as well as uninspiring.

Shanika had tried to set him straight and he ignored her. He thought his idea was good enough for a wedding and when the potatoes weren’t coming out in time – Ramsay stepped in again. He had heard about Shanika’s idea and had told them to go with that. Juni agreed to do that and then came another problem because as time passed the real problem turned out to be Juni. Juni didn’t lead the team and so Ramsay took it away from him. He told the team they needed to have another meeting to pick another captain and Taylor stepped up. She wasn’t like Juni because she vocal in wanting she wanted by the plates and so the Blue team finished on a high note. It was unfortunately not enough to ensure their win and therefore the Red team ending up winning this round.

The Red team had had a slight problem in that the cook on their duck was off with an entire table of people and so they had to recook everything because they had thrown what they didn’t need away by that point however they recooked the duck to perfection and so that’s how they were able to win this round. They hadn’t been plagued by never-ending problems like the Blue team. The Blue team only got their act together at the end and for that the judges decided to save two people from elimination right then. They chose to save Taylor and Shanika. The two women tried to steer the Blue team to success and for that they were rewarded. Meanwhile the rest of the team had to cook in the Pressure Test.

The judges waited until everyone came to the Pressure Test when they announced that there actually wasn’t going to be a Pressure Test tonight. They instead elected Juni and Ashley as the automatic bottom two. The judges had been disappointed in Ashley because she had been in charge of the sauce and upon realizing how much she was failing at it had stared to cry. The judges had left her in the bottom two because they wanted her to learn from the experience and so once they talked to her they told her to go up on the balcony with the others. It turns out they were always going to eliminate Juni because of his poor showing as a leader and so Juni said goodbye to the MasterChef kitchen.