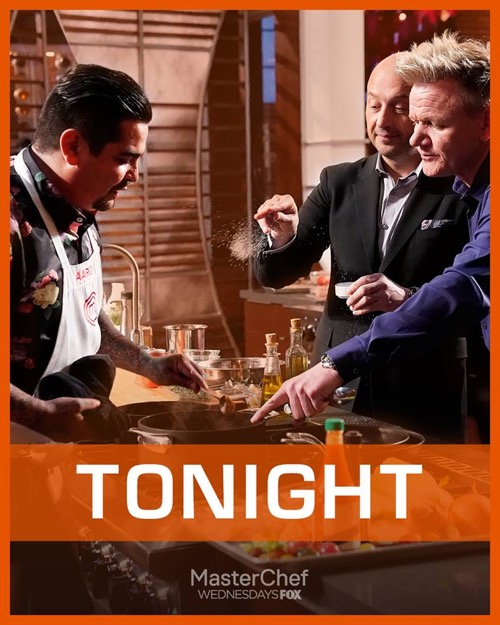 Tonight on FOX Gordon Ramsay’s Masterchef continues with an all-new Wednesday, July 18, 2018,  season 9 episode 9 called “The Big Not Easy,” and we have your weekly Masterchef recap below.

On tonight’s Masterchef episode as per the FOX synopsis, “The contestants face a mystery box filled with fresh seafood and must create a dish using two items from it. The chefs who fail to impress the judges will face an elimination challenge and be asked to upgrade one of the most popular frozen dinner dishes, Salisbury Steak.”

The Top 17 arrive to see the judges. It is time for their mystery box challenge. It comes from Aaron Sanchez. They all clap with excitement. They lift their boxes to find crawfish, oysters, catfish, shrimp and redfish. Their challenge is to make a dish with two of the items. They have 60 minutes starting now.

They all run to the pantry. Samantha is going to treat them like little lobsters. Gordon and Joe discuss how hard it is to cook all of these fish; whether you can easily overcook them or undercook them. Taylor is making a souffle. Gerron is making scalloped potatoes mixed with shrimp. Chelsea is making a corn cake. They have only 8 minutes remaining. Gordon and Joe are both impressed and beside themselves with some of the risks being taken. The plate as Gordon and Joe count down from 10.

Joe tells them there is more on the line than they thought. Whoever made the worse dish is going home. Aaron has made a crawfish and shrimp etouffee.

Gordon and Joe pick 3 dishes they think missed the mark. Taylor is called up. Joe thinks her tomato sauce is more like soup. Gordon thinks she is buckling under the pressure. The next cook to fail was Gerron. He made a pan-seared redfish in a white wine. He used the intestinal tract of the fish. He also over peppered them. Matt is the third cook to have a bad dish. He made a pan-seared redfish. Aaron thinks he killed the dish by putting the fried oysters on top. Taylor is spared leaving it down to Matt and Gerron. Joe announces that Matt will be leaving tonight. They say goodnight to him. Everyone claps.

On to good news, Gordon, Aaron, and Joe will choose great dishes. Ryan and Ceaser are safe. Ralph and Mark are also selected. Samantha and Owen also did a job well done. The 6 get to add the faces of the remaining cooks to boxes of frozen Salisbury steaks. The boxes have a cook time of either 30, 35 or 45 minutes.  The remaining cooks come running into the pantry to see what they have for time. Now they must make a Salisbury steak meal homemade in that time.

The cooks get started. Julia only has 30 minutes to cook her meal. Shanika thinks she got a smaller time frame to cook because the others are threatened. Gordon is beside himself that SJ is so far behind. Julia is on time and has only 30 minutes. There is no way she is going home, she tells Gordon. Times up.

Shanika brings her dish up. Aaron takes a bite. He loves the steak but the vegetables are rough. Emily brings her dish up. She had 35 minutes. Gordon thinks she nailed it. Julia comes up next. She had 30 minutes. Joe notes that she failed to mimic the frozen dinner. He loves the flavor even if she didn’t replicate the look. Lindsay is called up next. Gordon thinks her meat is disgusting. SJ comes up next. Aaron thinks he did a good job. Gerron comes up. Gordon thinks it is delicious. Ashley is called next. Joe likes her potatoes. The meat is bland. Her sauce is on point. Chelsea brings her plate next. Gordon thinks she has too much on her plate portion wise. He needs more finesse from her. Her plating is terrible.

All of the cooks come to the front to find out who is leaving. SJ, Emily, Gerron, and Julia really knocked it out of the park. The bad news, Shanika, Lindsay or Chelsea could be going home.

Lindsay is going home. Aaron commends her for her fighting spirit. Tonight wasn’t her night.