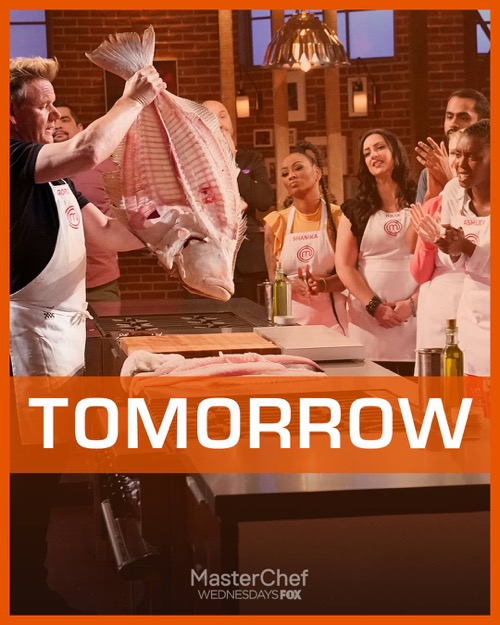 Tonight on FOX Gordon Ramsay’s Masterchef continues with an all-new Wednesday, August 15, 2018,  season 9 episode 13 called “Just for the Halibut,” and we have your weekly Masterchef recap below. On tonight’s Masterchef episode as per the FOX synopsis, “TThe Top 12 face their third skills test in the MASTERCHEF kitchen and replicate the proper way to break down a halibut. Those who fail to impress the judges are then tasked with creating a stunning original dish using their broken-down fish. Some contestants yield a bountiful filet, while others offer up a poor portion of protein.”

The remaining contestants took part in a Skills Test on tonight’s all-new episode of “MasterChef”. The name of this challenge says it all. The home cooks were all going to be tested on whether or not they can fillet a flatfish. Flatfish were some of the hardest fishes to cut up and so Chef Ramsay had shown the contestants how to do it. He brought out what was perhaps the largest halibut everyone had ever seen and he cut it up for the contestants. Ramsay managed to get out several pieces of perfect halibut fillets and he wanted each contestant to do the same. The ones that fail this Skill Test will have to cook again later on in the Elimination Challenge. And they were also told this Elimination Challenge would see two contestants going home, so naturally, everyone tried their best with the Skills Test.

The contestants all got their Halibut fish from the back and brought it to their stations to cut up. It was supposed to be an easy repeat of Ramsay’s lesson and it was anything but. There had been some contestants that had no problem replicating what Ramsay did and so they stood out to the judges who had been impressed. The only problem was that some of the contestants had also freaked out during this challenge. Chelsea was hyperventilating at her station and the others had had to calm her down. When they hadn’t worked, the judges had also stepped in to remind Chelsea to breathe because she had actually stopped doing that for a second there. It wasn’t until Chelsea had gotten her nerves under control that she managed to carry on with the test and it turns out her fillets weren’t the worst.

The judges went around studying each fish quite critically and they loved what Cesar did. Cesar managed to redeem himself in their eyes with this challenge because he had gotten the most fish off the carcass than anyone else. Emily had also come in as a close second and so both her and Cesar had been safe from elimination. There had been a few others that had gotten close to getting the meat of the fish and Chelsea had been one of them. She had been good enough that the judges told her to not worry herself so much next time. If Chelsea had gotten just a few more pieces off she could have been safe from elimination but the fact she hadn’t meant she would have to cook in the Elimination challenge where she would be cooking alongside some contestants who had truly done badly in the Skills Test.

Most of the contestants had been called disappointing yet Ashley hadn’t given the judges any decent pieces of filet. She had been in such a rush to get pieces on the board that she hadn’t taken the skin off of them and that was one thing the judges had been adamant about. They had taken one look at Ashley’s fish and had told her that she hadn’t handed them anything because she failed to follow basic instructions. Therefore, Ashley knew she couldn’t fail the Elimination Challenge. She knew that one more mistake would have sent her home and so she listened as the judges told them what was about to happen. The judges had taken a look around and they decided to allow the contestants to cook their fillets their way. They said they could cook the halibut however way they wish and that they shouldn’t leave it all to the last minute.

It turns out time management was a problem for some of the contestants. They would leave things to the last minute and would ultimately fail at one thing or another. That’s why the judges watched everyone tonight. They went around tasting everything and warning certain contestants when the taste was off and they just did their best to advise until the clock ran out. The first person that the judges called to come forward was Samantha. She cooked a Pan-Seared Halibut with Sun-Dried Tomato Pesto and Mushroom Risotto and it was disgusting. The risotto was undercooked and the sauce had been useless. It had been a poor showing on Samantha’s part. The next person they called was Farhan. He had cooked Roasted Halibut with Herb Marinade and Cauliflower Couscous and it had been pretty good.

Farhan had had some trouble with seasoning back when he was cooking and the judges had told him to take it down some, so he did and it leads to his dish tasting amazing. S.J. had gotten called next and he had cooked Pan-Seared Halibut with Parisian Gnocchi and Pickled Pears. And it hadn’t been that great, visually. It looked bad and it tasted even worse. The judges said they knew that SJ could cook better than that and so they don’t know why they had taste such a poor dish. The next person to get called was Shanika. She cooked Pan-Seared Halibut with Fennel, Blood Orange, and Meyer Lemon and it had tasted great. Shanika did a good job. Afterward, it had been Tayler’s turn and she cooked Grilled Halibut with Roasted Asparagus and Brussels Sprouts. It hadn’t been too bad only it could have better.

Then came Gerron. He cooked Pan-Seared Halibut with Spinach, Onions, and Sweet Puree and again it could have been better. But there had been someone that truly messed up. It had been Chelsea! She cooked a Pan-Seared Halibut with Sautéed Bok Choy and Thai Coconut Curry Sauce and it had been undercooked as well as inedible. Her dish had been too spicy and so she was left in trouble. On the other hand, the dish that had taken them by surprised was Ashley’s. She cooked a Pan-Seared Halibut with Creamed Spinach and Gnocchi A La Parisienne. It had looked delicious and had tasted the same. And so Ashley managed to save herself from elimination at the last minute but two others were still going home.

The judges had been proud of everyone tonight howe, however,e were two they believed hadn’t been ready for tonight’s challenge – they were S.J. and Chelsea.

SJ and Chelsea were both eliminated on tonight’s all new episode!