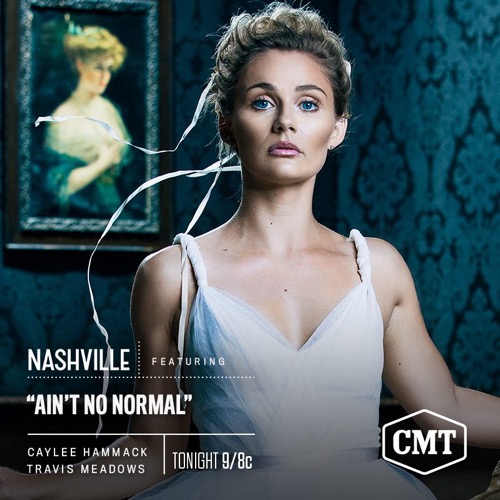 Tonight on CMT Nashville starring Hayden Panettiere returns with an all new Thursday, January 11, 2018, season 6 episode 2 called, “Second Chances,” and we have your weekly Nashville recap below for you. On tonight’s Nashville episode, as per the CMT synopsis, “Deacon goes on a date with a familiar face; Juliette dives into a self-help movement; Will and Gunnar invite Avery to perform with them; Scarlett is reminded how her career has had a positive influence on fans; Daphne reaches out to Jake.”

Scarlett and Deacon make their way through the farmer’s market. Scarlett sees Gunnar and runs to a vendor. Deacon follows her. She explains she is hiding from him. They start walking again and run into Jessie. She and Deacon fumble to make small talk before saying goodbye. Scarlett tells him he needs to call her.

Gunnar heads home and tells Will he saw Scarlett who pretended she didn’t see him. Will tells him to let it go. Will offers to play with Gunnar this week at his gig. Gunnar is a bit insulted. Will reassures him it is just because he had fun last week.

Avery talks to Juliette about going to see someone. She has a plan. She is going to see Darius. Avery isn’t too keen on the idea. Deacon calls Jessie and asks her out. She is a bit reluctant at first but then agrees to meet up with him.

Scarlett is on stage signing a slow solo song. She heads backstage after and sits down to breathe slowly. The next day Juliette shows up to meet Darius. He isn’t there. But his assistant wants to give her a tour. She agrees. Meanwhile, Deacon is trying to find a good place to bring Jessie. He asks Maddie. She teases him. She has her own problems. Jonah isn’t really engaging in text conversations with her. Scarlett arrives. She is having a hard time trying to find herself now that she isn’t working with Gunnar.

Juliette goes with the group from Darius’ community to help build a house. The head contractor hands her a nail gun and tells her to get going. She tells him she can’t do it but he walks away.

Gunnar and Will take the stage and perform at an outside venue. The girls go crazy. Avery watches from the crowd. They all go out for coffee together after. Avery is jealous. They are having so much fun.

Juliette hits her hand with a hammer. She screams. She wants ice. The assistant tells her it is in the van. She can go get it herself. She will be treated just like everyone else. Juliette tells them she is leaving.

Scarlett goes to visit her friend at her high school art event. Meanwhile, Jessie calls Deacon. She needs to cancel. Her son is having a bad day.

Juliette stays and works it out. They invite her back to the center for dinner. She accepts. Later, she calls Avery. She is going to spend the night there. Avery isn’t happy. She tells him not to ruin it for her. Jessie calls to say sorry to Deacon. She had a lot going on but she was also nervous to go. Deacon tells her it is just dinner. They plan to go out tonight. At school, Daphne asks Jessie’s son to come sit with her at lunch.

Scarlett comes to see Deacon at the studio. She thinks she needs to keep pushing ahead to help people. Meanwhile, Will and Gunnar show up at Avery’s. They are staging an intervention. They kidnap him and Kaden.

Deacon and Jessie meet for dinner. Will and Gunnar arrive at their gig with Avery, who is surprised and irritated and doesn’t want to get out of the car. They have a babysitter for him. Deacon and Jessie talk about their careers. Jessie wants to end her music career and focus on psychology. She wants to go back to school. There is an awkward silence. Deacon explains that he is overwhelmed, not upset she is leaving the business. Jessie tells him she is also overwhelmed. She asks him if he just wants to go back to being friends. He agrees.

Gunnar, Avery and Will take the stage. Avery is smiling. He is having fun. Meanwhile, Juliette is laughing with her new found friends. Scarlett is scared to get on stage.

Deacon brings Jessie home. They awkwardly hug goodbye before kissing. The next morning, Gunnar, Avery and Will all wake-up and make breakfast together.

Juliette comes into Darius’ office to see him before she goes. He tells her she really needs to think about who she surrounds herself with on a day to day basis. Scarlett and Gunnar finally talk at the market. She is happy he is having fun with Will and Avery. He asks her what she is up to musically. She explains she isn’t sure, but experimenting.

Deacon drops Daphne off at school and runs into Jessie. Daphne is annoyed.

Juliette comes home to see Avery. He asks her how it went.