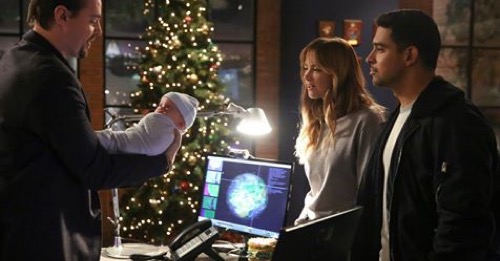 Tonight on CBS NCIS returns with an all-new Tuesday, December 11, 2018, season 16 episode 10 Fall Finale called, “What Child is This?” and we have your weekly NCIS recap below. On tonight’s NCIS season 16 episode 10, “What Child is This?,” as per the CBS synopsis, “The team’s holiday plans are put on hold when the murder investigation of a Navy veteran includes the discovery of a newborn baby who has no identification and no apparent ties to a family.”

A dead vet usually wasn’t the team jurisdiction. It was more the Metro PD’s territory however they had been swamped over the holidays and so they couldn’t take on another case. They had to give it to NCIS. NCIS technically investigated matters that included the military and the victim was once in the Navy. Jerome Murray had retired some years back and he used his free time to volunteer. He was actually volunteering at a soup kitchen that served the homeless and had stopped some people who wanted to ruin the holidays for everyone. There had been this one drug dealer who was shopping his own wares at the shelter and so Murray kept throwing him out. And so that could be the reason behind someone stabbing Murray from behind.

The team went to the soup kitchen and they found out all about this drug dealer. He went by the name Vicious and so the team found him using his street name. He apparently lived by himself and so when then the team invited themselves – they weren’t prepared to hear someone else in the other room. They tried asking Vicious who else was there and Vicious answered by pulling a gun. He pulled a weapon and demanded that they leave him alone but that couldn’t happen and so eventually Vicious fired the gun. Things were over quickly once he did that and Vicious was killed instantly. So the team no longer had anyone standing in their way! They went to the bedroom, opened the door to see who was behind it, and they found a baby.

It was a baby boy. He looked like he was still a newborn and so everyone thought that the baby was Vicious’s. Only they couldn’t find any paperwork on the baby. Vicious hadn’t gone to a hospital and there were no signs of a mother being around. It appeared as if the baby came out of thin air! There wasn’t even anything around to indicate what’s name is. The team thought that maybe if they reached out to Vicious’s lawyer that maybe they could get answers and according to the lawyer there was no girlfriend and no kids in the picture. The baby came out of nowhere and so the team had a theory. They tested the baby’s DNA against that of Vicious’s and they found out that he wasn’t the father.

The baby was most likely stolen! Bishop and Torres had heard that Children Protection Services were overrun this time of year and so they decided to watch the baby because they figured they could find the biological parents soon, but it turns out there weren’t Amber Alerts matching their baby. Of the thousands of kids that had been kidnapped, none of them were newborns! The baby was never reported missing and so the team tried to figure why that was. They went back to the homeless shelter to ask around and they found out that Murray had witnessed a crime. He talked about going to the cops because he had seen something involving Vicious and so they followed that clue back to the EZ Mart in Annadale.

Murray reportedly witnessed a crime there and so they viewed hours of security footage until they found what they were looking. They found Vicious buying a baby from a crying mother. Her face and car were shown in the footage. Her name is Tanya Jacobs and she was seventeen. She didn’t have any real address and had been staying at a motel when the team tracked her down. They were going to ask her about her baby and so she tried to run. She made as far as to the car when she was stopped and her drugs, as well as her needle, fell out of her handbag. Tanya denied that the drugs were hers and the team told her they believed her because they wanted to get Tanya to open up. And that was something they needed if they were going to ask her about her baby.

It took Tanya some time yet she soon got to talking. She said her parents kicked her out when she got pregnant and that the baby’s father then ran off. Tanya was alone and desperate. She turned to drugs to cope and only got cleaned thanks to the adoption agency. The agency had found the perfect adopting couple who paid for rehab and doctor visits. Its what allowed Tanya to give birth to a healthy baby boy and she had been set to hand over the baby to the Shaws when she heard she could make ten grand. Vicious used to her drug dealer and he offered her ten grand for the baby. He said that he lined up a lawyer to adopt it and so Tanya told the Shaws that she had changed her mind. She claimed that she was going to keep the baby when the truth was she was going to sell it.

Then she heard about what happened to Vicious and she had been freaking out. So the team told her that her baby had been found an that he was okay. Tanya had been so happy to hear this that she actually thought it was a sign. She said that maybe she could keep her baby because she had money now and so Sloane and Gibbs talked her out of that. They told her what she needed was to get clean and be healthy. Her baby needed more than what she could provide and so Tanya ultimately decided to give him up. He was sent to the Shaws and they were so happy to finally adopted him that thought it was a miracle.

Meanwhile, the lawyer that had lied to a federal agency and tried to buy a baby was going to face some serious time.