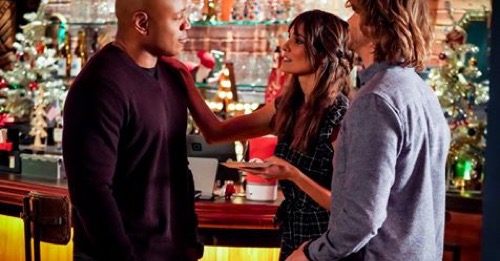 Special Prosecutor Rogers was still hanging around being a Grinch. He even banned the annual Christmas party at the office because it was against some obscure rule and so the party was being moved to Deeks’s new bar. His bar never got the chance to official launch and the Christmas event for the whole office was going to be the first time his bar was opened to the public. Deeks was a little nervous about playing host and he had tried to back out on several occasions, but he didn’t really have a good excuse until Special Agent DeChamps asked his team for a favor. She informed them that she was looking for an Army reservist. His name was Ernie Gaza and served overseas before he had been forced to come back.

It turns out Garza was a problem with drugs. He was suffering from PTSD and had used drugs as a coping method until he was demoted and found himself alone. Garza had tried out rehab and had also found work however his behavior was still erratic enough that he couldn’t hold down a job for long. Garza was a highly trained individual that could be a danger to himself as well as to others and to make matters worse he was last seen shooting up a Christmas lot. He and a buddy took a joy ride around a lot filled with Christmas trees and before they had lost control of the car it had been Garza that began shooting his weapon off into the air. He also disappeared right after the car crash and left his friend to face charges on his own.

His friend was Marine Staff Sergeant Brad Hawkins. Hawkins had blacked out after the crash and he hadn’t known what happened. He had been tested for drugs and alcohol and he had been clean. He had drunk maybe one drink and that had been it. There was nothing to explain why he blacked out or why he crashed the car. So they asked Hawkins if Garza could have put something in his drink. Hawkins didn’t want to believe that of his friend and he tried to tell NCIS that Garza wasn’t like that. He said Garza was one of the most honorable men that he knew and so the team tried to figure out why this great friend would leave Hawkins hanging. And so they asked the one other person that would have known Garza’s mindset that night.

They talked to Garza’s girlfriend Mia. Mia was very sweet and she said the story about the Christmas lot didn’t sound like Garza. Garza had been cleaned for a very long time and he had even thrown away the pain meds that his doctor prescribed him for when he injured his shoulder. It seems that everyone that was with Garza leading up to the accident said that Garza had changed for the better. He had gotten help and was trying to maintain his sobriety, so it didn’t make sense why he would give all of that up to take down both himself and his friend. The team went looking for Garza and they eventually found him hiding out on a boat. He claimed not have known how he got there and he also said he blacked out that night.

The only thing that Garza remembers is going out with his friend and so the team tested him. It turns out there had been high doses of a medication found in his system and it was the same thing that had been found in Hawkins’s blood test. It was a drug that could lead them to both blackout and so the team went back to the bar that the guys had used. They had watched the security cameras as a man watched them before eventually approaching them. It was believed that this man might have targeted these two servicemen and so the team wanted to know why. They went back to the guys and they asked them what they remember about the man that approached them. And all they could recall was that the guy asked about Garza’s job.

Garza was in waste management. There were plenty of people at his work who had access to money and Garza wasn’t one of them. The team didn’t know why Garza had been targeted and so they went to his job to ask around. They found someone with the same job title as Garza and found out that they handle sensitive waste such as pharmaceuticals that hospitals needed to dispose of. Such a shipment of drugs had just come in and so the team asked to see it, but it turns out their thief had already stolen it by then. They traced the theft back to the man from the bar and his name was Jirani. He had even taken the truck to his estates with plenty of lands and had left in full view of everybody that attended his party.

The team had to work their way through a bunch of people that were high and they tried to pretend like they could be buyers however Jirani saw through it and so the team had been forced to fight the rest of their way. They had stopped the shipment from being sold on the streets and were able to reclaim a large part of it. Only the team had had to arrest so many people that DeChamps didn’t have time to catch a flight and was forced to stay in LA for Christmas. So the team invited her back to their Christmas party and she got to celebrate the holidays with her friends. They had all cleared Garza and Hawkins of any wrongdoing, so the guys weren’t going to be facing any time for what they did and all they really had to do was clean up the Christmas tree lot. And so it had seemed like everyone was going to be enjoying their holidays until they remembered that Callen couldn’t be with them.

Callen had learned that Anna was in the hospital and that she had gotten beaten up pretty badly.

So he chose to spend Christmas with her and Arkady.