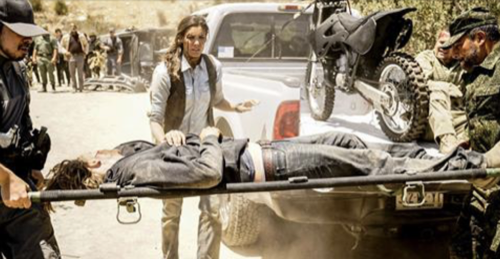 Tonight on CBS NCIS: Los Angeles returns with an all-new Sunday, October 07, 2018, season 10 episode 2 called, “Superhuman” and we have your weekly NCIS: Los Angeles recap below. On tonight’s NCIS Los Angeles episode, as per the CBS synopsis, “The prototype for a tactical assault suit is stolen from a Navy base and used in a Beverly Hills jewelry heist, so the team must determine who stole the suit and what their next target is. Also, retired Navy Admiral Hollace Kilbride temporarily oversees the team while Mosely and Hetty face repercussions for the unsanctioned Mexico mission.”

Someone managed to steal twelve million in loose jewelry and watches in under five minutes on tonight’s all-new episode of “NCIS: Los Angles”.

The merchandise had been in a secure vault with four armed guards at the door. Somehow, the thief managed to hospitalize those guards and erase any footage of he or them leaving the building. It was like they were a ghost. The local police hadn’t wanted to touch this case because they weren’t sure how far they’ll go with they what they saw at the crime scene and so they passed it off to NCIS. The team were federal agents after all and they had more resources at their back than LAPD, however, the team had run into some of the same problems. They had looked at the crime scene that indicated that there had only been one thief and then they saw evidence that said this person came with some heavy artillery that no one person could carry around alone.

Sam had gone to the crime scene and neither nor Special Agent Nicole DeChamps knew what they were looking at. They had been confused and had needed their techies for help. Nell had luckily come across something that she thought explained everything. She found footage from outside and it showed the thief as well as what he was wearing. The thief had on ballistic armor and Nell had been surprised to see it because armor such as that was technically still in its testing stage. This armor had guns, explosives, and was impenetrable. It was going to revolutionize things once all the kinks had been worked out and so Nell with Eric’s help had put out feelers. They wanted to see who had this armor and how it could have possibly gotten out.

It turns the people were working on it at a base on the east coast and the man in charge of the armor hadn’t noticed that it went missing while he was on duty. The man’s name was Master Chief Lincoln Briones. He had since disappeared himself and so the team believed it might have been him wearing the armor. He was familiar with it thanks to his job and was a Navy SEAL. Briones was taught how to be adaptable and he could have used that experienced to take on the suit, but if that’s the case then no one believed Briones was done with just one vault. He could have broken into one vault without any need for the armor and so the team believed he was just getting started on a crime wave.

The footage they found had also showed that the thief took a truck and the truck was followed to a car repair. Sam went with Nicole and the guy that ran the place was into shady things and a coward. He hadn’t wanted to be arrested or transferred out of state and so he said where the guy that drove it went. The agents then passed the message to Kensi and Deeks and the two ended up finding Briones. He had been shot dead and there had been some yelling in the back. The yelling had come from Briones’s nephew. It seems the nephew was at the root of everything. He had been tied up and had tape over his mouth when the agents found him yet once he found out what happened to his uncle he started talking.

The nephew took part in illegal car races. He was winning until he lost and what he lost was his car. He tried to buy it back by loaning money from a man named Rob Durant and so eventually Durant came demanding his money. Only the nephew hadn’t the money. He was living in an apartment that his uncle was paying for and unfortunately that made Durant look into this uncle. When he found out that this uncle worked on a Navy base, he kidnapped Briones’s wife and daughter. He then told Briones to go get him the most dangerous weapon on base and that if he didn’t like it when both wife and daughter would be shot in front of him. So that’s when Briones stole the ballistic armor and handed it over to a man like Durant.

Durant was crazy and his girlfriend was even crazier. The nephew told NCIS that the pair wouldn’t care about his aunt or his eight-year-old cousin and he pleaded with them to find them in time. Kensi and Deeks ended up finding the two in a trunk. The little girl had needed some resuscitation before she regained consciousness and had otherwise been fine, but Durant and his girlfriend Rachel Conway were still out there and they were the problem. Durant was former police and after he was fired from the job he moved onto robbing banks. He was the chief suspect in one particular robbery and the FBI had never found enough evidence to get him. And so it made sense that after he ran the risk of exposure that Durant would return to his roots.

Sam and Nicole tracked him back to the Gardenia Casino. They had been given orders by Admiral Kilbride to contain the shooter rather than confront him and the team. The agents had understood that order to mean that no one should risk their own lives trying to stop Durrant on their own and so it was the local police that hadn’t gotten that. The Gardenia Police had ignored them when they said to stay back and two officers died because they drove up too close to Durant. They were right in his blast region and had thought they were safe if they used their squad car to shield them. They believed they could penetrate the armor that way yet the armor had covered pretty much every part of Durant’s body. He was fully protected! There was no place where he was susceptible and after he killed those officers – Sam truly tried to take down Durant. Durant couldn’t be killed form afar and so the officers had been right on that.

Only Sam knew there was another way to get close to Durrant. He received backup with Kensi and Deeks and he asked them to rain fire on their shooter. It couldn’t kill him and so Sam was just trying to distract him long enough to get in Durant’s face. From there, the team worked together to shoot the gun of Durant’s hand and give Sam the chance to fight him with hand to hand combat. Sam had struggled at first with getting past that armor and so it was by pure chance that he managed to push the armor away from Durrant’s neck just long enough to shoot him. And so Sam got very lucky and while they hadn’t been able to arrest Durrant they still got his girlfriend Rachel.

The team had done good work and they went to visit Callen afterwards to see how far he’s come with his recuperation, but while he loves those guys, he hadn’t told them that chances are neither Hetty nor Mosley were going to be allowed back to run the team.

Callen had talked to Admiral Kilbride and Kilbride admitted he was there for the long haul.