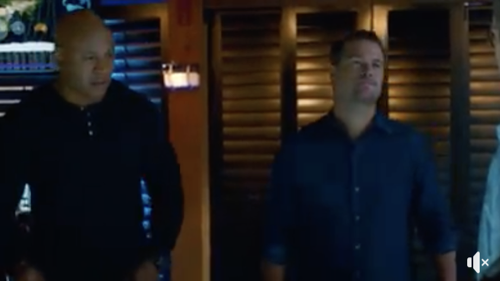 Tonight on CBS NCIS: Los Angeles returns with an all-new Sunday, October 28, 2018, season 10 episode 5 called, “Pro Se and we have your weekly NCIS: Los Angeles recap below. On tonight’s NCIS Los Angeles season 10 episode 5, as per the CBS synopsis, “While assisting NCIS with an undercover operation, informant Elizabeth Williams is arrested, and the team are unable to provide her with an alibi. Also, Callen meets with ATF Agent Anna Kolcheck, who remains on suspension.”

Deeks’s former CI Tiffany Williams was back in trouble on tonight’s all new episode of “NCIS: Los Angeles”.

Deeks has tried to be there Tiffany. She was deeply involved with his former partner Detective Boyle and Deeks thought he owed her because of that. Only she keeps getting into trouble. Tiffany had gotten picked up on a drug charge and just managed to stay out of prison. She had been given parole and was told to keep her nose clean however she hadn’t been able to do that and be an informant for Deeks. Deeks had needed Tiffany to return to prostitution because one of her johns had reportedly stolen something from the Navy and sold it to a hostile government. The guy’s name was Phillip Robbins and he was obsessed with Tiffany. Tiffany was the only in they had and so they used her to get as much information as they could on Robbins. And then the plan was halted because Tiffany got arrested again.

Tiffany was arrested for prostitution and that violated her parole. She was arrested and she had hoped that her lawyer would get her off, but bungled things in the courtroom. He filed something wrongly and the judge was willing to teach him a lesson because of that. She had Tiffany remanded to jail until her trial and so the plan to use Tiffany to get Robbins was useless. The whole team had been upset when they found out what happened and no one was angrier than Deeks. Deeks thought the initial drug charge had been bogus and that someone had messed up when she was booked at the station. He also thought that the lawyer was useless and had gotten in the lawyer’s face about what happened. The lawyer basically ignored him and had laughed what happened because he was getting paid either way.

The team had talked to Tiffany’s mother and she had told him that one of Tiffany’s friends were paying for the lawyer. The guy was supposedly from a big law firm and so he shouldn’t have made such a stupid mistake yet Sam and Callen decided to look into why he might have. They had Eric check to see who was paying the lawyer and the trail went back to Robbins. Robbins was still in town and he was paying for a useless lawyer. It didn’t make sense unless Robbin was purposely paying the guy to lose his case and so the guys thought Tiffany’s cover was blown. They knew that they had to get Tiffany out of prison as soon as possible or she risked getting killed and so the team decided to use Kilbride’s absence to their benefit. They arranged for one of them to get legally accredited and then took over Tiffany’s defense.

They also arranged for someone to talk to Tiffany on the inside. She was assured that they were getting out of there and they told her about her change in lawyers. Tiffany had been pleased when she learned that they were going to be upsetting Robbins and so she had every confidence that Deeks would get her out of this mess. He had been the only one that hadn’t believed her drug charges were real and he had been right in the end. The team had spotted Robbins talking to Vanessa Brown. Brown was former LAPD when she abruptly fired after some drugs went missing in her care and the fact she still had friends on the force could explain how they managed to get Tiffany arrested again for the prostitution charges. And so the team had Eric figure out what Robbins had wanted to cover up.

Tiffany had passed on what she knew and, from there, they found out that Robbins was going to steal something from VividLock Security. Callen and Kensi were going to break in to protect the asset and unfortunately they had been too slow putting their plan into action. VividLock had already been broken into by time they got to the scene and Eric reported that he spotted Robbins on his way to the courthouse. The team knew that Robbins would go after Tiffany and so they rushed through getting her released. They had Detective Whiting from IA go speak to the ADA trying the case and eventually ADA Lopez agreed to drop the charges. Deeks and Callen were moving Tiffany and was getting her out of the building when Robbins came in. He demanded Tiffany and Callen bought the team some time. He said that he was willing to trade Tiffany if they could get the ballistics that Robbins stole and, while they were haggling, backup arrived.

Unfortunately, Robbins also had backup. His dirty cop and her people were trying to kill Tiffany anyway they could and so Deeks was forced to defend her. He’s been looking out for her ever since he helped her to get clean and he found out why Tiffany hadn’t revealed to them that Robbins knew about her cover. She had a friend from the old life and Robbins had beaten her up as a way to send a message to Tiffany. Tiffany hadn’t said anything because her friend hadn’t wanted her and so she was just being loyal. And Deeks got that. He understood why she hadn’t said anything and he wanted Tiffany to go back to her quiet life because he knew that was what was best for her. And so the team thought that was it. They figured they might never everything that Robbins stole and they tried to make their peace with it.

Only as they were leaving the courthouse, they saw Anna as in Callen’s Anna getting marched in wearing handcuffs.