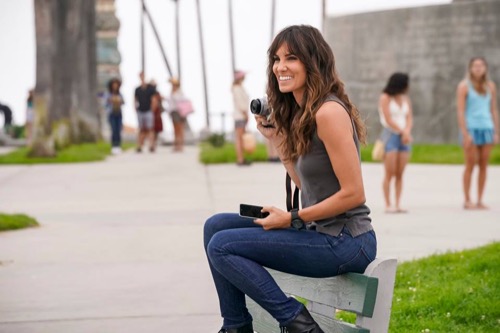 Tonight on CBS NCIS: Los Angeles returns with an all-new Sunday, November 18, 2018, season 10 episode 8 called, “The Patton Project,” and we have your weekly NCIS: Los Angeles recap below. On tonight’s NCIS Los Angeles season 10 episode 8, as per the CBS synopsis, “Deputy Director Ochoa (Esai Morales)
volunteers the NCIS team to assist with a covert operation tied to a terrorist group advocating for an extreme military force. Also, Callen has concerns as to what an assignment of this nature could mean for the future of the team.”

Deputy Director Ochoa called the team to an unknown location because he was loaning them on tonight’s all-new episode of “NCIS: Los Angeles”.

The team was met by Tobin Shaked. He was former Mossad and the team had once rescued his daughter however since then he’s joined a shadowy arm of the US government. He wouldn’t say who was working for and so he just told them it was a matter of National Security. Shaked said that their government learned of an imminent threat involving the Patton Project. The Patton Project was an extremist group made of military personnel and they believed in taking drastic measures. It seems their latest project to create a Muslim genocide in the Middle East and the contact they had inside of the Patton Project said that whoever was involved in this imminent attack was somehow connected to Venice Beach.

The information was shaky at best, but it was they had before the contract went dark and so Shaked told him what he and apparently Arlo Turk found. They found over a hundred people matching the description of what they were looking for and they were going to be sharing whatever they found with Shaked. Shaked hadn’t said what he would do with the information and so the team did some digging. They remembered that Shaked was an assassin and it turns out he still was one. He was going to kill whoever the team handed over to him and no one was sure how they felt about it. They weren’t killers and have only killed in their own or their team’s defense. And therefore they had Sam and Callen speak to the Deputy Director.

Ochoa had been with Arlo Turk and they were discussing the mission, so the guys asked them if they knew what Shaked and what he was going to do with the target. They said it didn’t matter. Ochoa reminded the guys that they weren’t killing anyone and that they had no guarantee of what would happen to the target once they handed he or she over. He declared it was all suspicion and that wasn’t exactly true. The team found someone on their list had died and that the autopsy had been sealed. They wanted to know why that was and so they spoke to the Medical Examiner that performed the autopsy. She was someone with a high clearance and she told Callen that she didn’t want to lose it anytime soon.

Except they asked her why she agreed to talk to them and she said what she saw hadn’t sat right with her. The doctor admitted that there were signs of waterboarding on First Sergeant Dean White and that it led to his death. He was basically tortured to death and so that set up alarms with Callen. He went back to the team and he discussed what he found. Callen believed that White was a suspect and that Shaked was the one that put him through an “enhanced interrogation”. The information had even shocked Arlo because he hadn’t known that Shaked was doing that to people and so he suspected he might have been brought in to put a friendly face on what Shaked was doing. They just didn’t know why them.

The team was confused about why they were chosen for something like a hit job and so it was seeing them all together, including Arlo, that they remembered Mexico. They went rogue down in Mexico and so sending them on this assignment was punishment. It was Callen that confronted Ochoa and Ochoa basically said: “and?”. He told Callen that his team proved they had no problem operating in a gray area and so this mission they were assigned was a way for people in Washington to feel reassured. There was nothing the team could do or say that would change Ochoa’s mind and so they just had to get on with the job. The team went looking for suspects with Shaked and they eventually found someone they wanted to talk to.

They found Colonel Trevor Lawford and he had been meeting with someone. When the team tried to approach, both guys made a run for it and they Lawford. The other guy they cornered and somehow he fell off the top of the roof. The team suspected that Shaked killed him and so they confronted him, but Arlo said that he was there and that they didn’t kill anyone. They claimed that the guy ran off the top of the building and it was simply too outlandish for the team to believe. So they said they were out. They left Shaked and Arlo to handle the threat alone because they didn’t want to be a part of an assassination. And it wasn’t until they turned away that they began questioning the involvement of their dead guy because he wasn’t military.

The team didn’t want to fully walk away until they found out how Tyler was involved. He was a civilian and he knew no one in the military. It didn’t make sense why he would be connected to the Patton Project until the team talked to his sister. She said her brother was mentally ill. He was even suicidal and was convinced by his new friends that his suicide should be glorious. Tyler believed that he should make his death mean something and so the team suspected he might have been talked into becoming a suicide bomber. They looked into it and learned that their suspect Lawford had traveled to several psychiatric facilities all over the country and so he was using people that wanted to die to further his own agenda.

The team also realized that they had been wrong about Shaked. He hadn’t killed Tyler and he shouldn’t be allowed to kill Lawford because only Lawford know how many suicidal people are out there ready to become terrorists, so they reached out to Arlo. Arlo had still been with Shaked and he stopped the other man from killing Lawford when they did find him. Instead, Lawford was handed over to NCIS and Sam and Callen had tried interrogating him. Lawford was a closed book and he refused to talk them or admit he was part of the Patton Project. They got nowhere with him and eventually, Ochoa found out what happened. He pulled the team aside and made sure that Shaked got into a room with Lawford.

Shaked hadn’t done anything by the book and so he scared Lawford. Lawford was married and had a daughter. Shaked used both of them against him because he faked a recording in which they both admitted to being part of the terrorist group and could be arrested for treason. Shaked hoped that Lawford was shaken enough that he would confess to what he did, but Lawford refused to break because he believed in his own ideology. He thought that if he removed all the Muslims that he would save his country from war and terrorism. Lawford wasn’t going to break and that’s why Sam took over his interrogation. He wanted to know how an American blowing up a plane would cause people to turn on Muslims and so he asked Lawford a few questions.

The questions hadn’t made sense at first though Sam got what he needed to know. He realized that the Patton Project had put people that were on the No Fly List back on flights and that they were going to use the mentally ill to take down one of those flights. It would mean that when the plane went down, everyone would blame the guy that wasn’t supposed to be on the flight rather than the real culprit. The team looked into whose gotten back onto the list and they found someone. They also found a mentally ill with her baby. She was going to kill everyone on that flight because she had been convinced that she deserved to die and that her baby shouldn’t have to grow up without her. Allie was arrested and they found the bomb strapped to her stomach.

They called in the bomb squad and they assured Allie that they were going to help her.

And she broke down in tears because no one has ever offered to help her.

The team stopped an imminent attack and they rescued a mentally ill mother from people that talked her into killing her baby, so they more than proved themselves to Ochoa and he realized that while the team may be gray it will never be black.