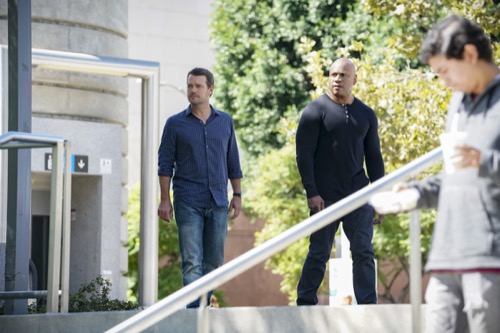 Tonight on CBS NCIS: Los Angeles returns with an all-new Sunday, November 25, 2018, season 10 episode 9 called, “A Diamond in the Rough,” and we have your weekly NCIS: Los Angeles recap below. On tonight’s NCIS Los Angeles season 10 episode 9, as per the CBS synopsis, “The NCIS team investigates the home invasion of Navy Captain Dean Hadlow (Christopher Goodman), who was entertaining his friend, General Omer Abidi (Ravi Kapoor) of Pakistan, when robbers successfully stole money, jewelry, and highly classified information.

A home invasion took a turn for the worse when someone was shot on tonight’s all-new episode of “NCIS: Los Angeles”.

The victim was a senior naval officer by the name of Captain Dean Hadlow. Hadlow was having dinner with his wife Luanne and a couple of guests from out of town when men broke into his home. The men took cash, jewelry, and the captain’s laptop that carried classified information on it but it only became violent after Hadlow tried to fight back. He stepped in when one of the men got violent with his wife and he took a bullet for his troubles. Hadlow was rushed to the hospital with his wife who had also been knocked out by the men and so it had been up to the guests to call for help. They were General Omar Abidi of Pakistan and his wife Sahar. They had been staying with the couple for personal reasons when the break-in occurred and they left the house right after made that call.

It had seemed a little suspicious. The team wanted to know why the couple hung around to find out what happened to their friends and they thought that might have the reason behind that when they went to the crime scene. The house hadn’t been broken into from the outside. It instead looked like the thieves had had their own keys and that they let themselves in. So they had help from the inside. The team thought that the Abidis could have assisted with the break-in and had gone to see them at the consulate however their Ambassador told the team that the couple couldn’t be questioned. They might have rare insight into a case and so the guys didn’t understand why the consulate would get in the way of that.

Only they had another suspect to chase after. The team had also learned that the captain’s stepdaughter was too busy to come to the hospital when she learned that Hadlow had been shot and that she was the only other person that had a key. Her mother thought Emily might be in danger as well and it turns out the girl just didn’t bother. She was partying at a beach house and so Sam and Callen turned their focus on Abidi. Abidi eventually left the consulate to go downtown and, as the guys were watching him, someone tried to assassinate him. Abidi tried to ran and the guys captured him before taking him back to the boathouse. The team believed that Abidi was somehow involved in what happened to Hadlows and what they found only went against their suspicions. Abidi hadn’t been involved with the break-in.

The Abidis were at the house because they were trying to defect. The General was in town to pass information to the Americans on high-ranking Pakistani government officials that were working with the Taliban. He and his wife had left their country without informing anyone and so the consulate didn’t know where they were until the break-in. The break-in had tipped off Pakistan and now their country was trying to deport the Abidis back home where they’d both be arrested for treason. The only reason the couple had been willing to take such risks was that Hadlow promised to protect them. He took down the information that the general passed on and he saved it on his laptop that was now out there.

The State Department was prepared to hand over the Abidis. They didn’t want to risk a falling out with an allied country and so the Abidis was going back to Pakistan if the team didn’t find that laptop. So they decided to take another look at Hadlow’s stepdaughter Emily. Emily was hanging out with a bunch of sketchy guys and it turns out Emily knew about the dinner party because her mother invited her, but Emily hadn’t wanted to waste her time with her parents’ rich friends and so she was asked about that. She said she took no part in what happened and it turns out all she did was mention the party to her boyfriend. Lucas Walker had said that Emily had expensive tastes and that he couldn’t find a job. And so he thought robbing her parents would be the next best thing.

Lucas told his guys to just grab what they could easily sell and no one was supposed to get hurt. Only once things changed, he quickly got rid of his haul and so the team was able to track down the captain’s laptop. They found it and recovered the evidence that the Abidis were willing to give though didn’t quite change things for the general or his wife. The State Department wasn’t willing to work against an allied country and they were going to allow the couple to be deported back to Pakistan despite what the team found. The guys didn’t believe that was fair and so they tried on their own to save the couple. They even found help from Deputy Director Ochoa who hadn’t wanted to turn the couple over to be executed by the Taliban.

NCIS tracked down the car that was taking the Abidis to the airport and they rescued them from certain death.

The team eventually got the State Department to work with them rather than against them and together they managed to get the Abidis into witness protection without further risks.