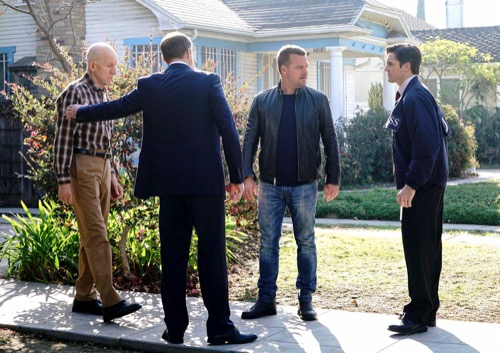 Tonight on CBS NCIS: Los Angeles returns with an all-new Sunday, April 1, 2018, season 9 episode 17 called, “The Monster” and we have your weekly NCIS: Los Angeles recap below. On tonight’s NCIS Los Angeles episode, as per the CBS synopsis, “While investigating a missing person case, the team uncovers a killer who puts on shows for high-paying voyeurs. Also, Mosley assigns Callen as her partner on a joint ATF mission to apprehend someone from her past.”

EAD Mosley and Hetty’s relationship were seemingly on the outs on tonight’s all new episode of “NCIS: Los Angeles” when the whole squad room saw those two arguing in the upstairs office.

Things had been fine between the two when Hetty came back from Vietnam however something must have changed because both Callen and Sam were so caught up in what might be happening upstairs that they didn’t hear either Kensi and Deeks come in. The couple had been going over their wedding plans and had argued about what should stay as well as what should go, so their minor argument wasn’t exactly quiet. Kensi had wanted Deeks to care about decorations and he refused to fake his enthusiasm. He said the wedding part didn’t matter because what mattered to him had been the part where she agreed to marry him and so Kensi thought that was sweet. She still told him that she needed his help to plan the wedding and therefore he eventually caved.

Deeks had just told her that he’d do his best to help when they came upon Sam and Callen watching what turned out to be the much more important fight. The coupled joined the guys in watching what was going on and they were coming up with theories when Eric called them to ops room, but that too had seemed off because usually Eric would have yelled out new case from somewhere upstairs and so he explained that this time he came downstairs because everyone was needed in the operational room besides Callen. Callen had found himself singled-out and so he told the team that he must be the reason for the fight between Hetty and Mosley. Mosley must have wanted to fire him and Hetty was arguing against it.

The others of course had all said that “no, that can’t be it” and Sam had even agreed that he would quit if Callen was fired though Callen wasn’t the only one to have that concern. They had all questioned if they were going to be fired or worse replaced by Hideko when the truth was that none of them was being fired. They were merely being broken up and reteamed. Mosley had wanted to change things around and so she decided to place Sam with Kensi while Deeks was to be paired with Hideko. Hideko therefore wasn’t replacing anyone and Callen wasn’t being fired. He too was being reassigned because Mosley had wanted to partner up with on a top-secret job that she hadn’t wanted the others to know about.

Mosley had been asked by ATF to assist in the capture of known international arms dealer Spencer Williams. Williams had taken part in stealing a cache of weapons and had then sold them to Iran yet Williams was stateside again and ATF believed they could catch him stealing even more weapons. That’s why they asked for Mosley’s help. She had sort of dated Williams before she found out what he really did and so she wanted to catch him as much as anyone else just she made things personal. Mosley tried to dictate to the ops to ATF and had almost gotten thrown off the case because they were emotional as it was. They were watching Williams for weeks when the man they placed on the inside was killed right in front of them and they couldn’t do anything about it because it would risk the op, so Callen talked to Mosley.

Callen had seen for himself that Mosley was too close to the case and so he demanded full-disclosure before he helped. He said he knew someone that could get him an in with Williams’s business partner and so he could infiltrate the arms deal, but he hadn’t wanted to take chances and so he asked Mosley to tell him everything. She just told him the half of it and that got Callen agreed to replace ATF’s inside man. Mosley had also used Callen’s in to get forty-eight hours alone with Williams because she wanted NCIS to get the first shot at him and so her teaming up with Callen had worked out in her favor while the others were stumbling across they weren’t sure they knew how to deal with.

The other agents had been assigned to look into the disappearance of Lt. Commander Timothy Weir. Weir was working with DOD Intelligence as part of their Special Access Program and he missed his last check-in, so the team dug into his life and found out he had been in contact with Mandy Huang. Huang was an attaché for the Chinese Consulate and she appeared to be in a romantic relationship with the very married Weir yet Deeks and Hideko had questioned her and she claimed to have not have seen him. She said that they had a date that he never showed up to and so the other team looked into why that was. They found out that Weir’s car had broken down and that he had gotten a tow.

Only the man that drove that tow was a convicted killer. He had gotten arrested for killing a young woman twenty years ago when he was high on meth and it had been a slaughter. So much so that Sam instantly suspected their convicted murder of having something to do with Weir’s disappearance and hadn’t seemed that way. He said he had towed the car and had left behind Weir who said he was going to hire an Uber while he drove back to the shop. He had an alibi because others had remembered seeing him at work however something must have happened because Weir was later found dead. He was found on a tracking app he set up with Huang who as it turns out was an American NSA agent. The two worked together and fell in love. And so when Huang found out that no one had heard a thing from Weir, she used the tracking app to find him.

She tracked him to a closed theater and found mere pieces of him. That’s when she told NCIS who she really was and they looked into what happened to Weir as well as the others. He had been dismembered and had been put back together again with body parts belonging to other people, so the team called it in and they found out they were looking for serial killers. There was a group of people that killed and dismembered someone in front of an audience, but the team had had one of them in their custody and had let them go. They found out their convict was part of the killing ring and that he had met like-minded people who killed off the real people that worked at the mechanics shop to take their place. And so NCIS lost sight of their serial killers, unfortunately they also sight of Williams.

Williams had gotten away again and Mosley had wanted to blame Callen for that though Hetty told her that she should have been honest with Callen. Callen didn’t know that Williams and Mosley had a child or that William had gone on to kidnap their son, so it wasn’t until he learned the truth that he promised to help her find her son. Her son was taken when he was still a child and so she had no idea what he looked like or if he would still remember her.