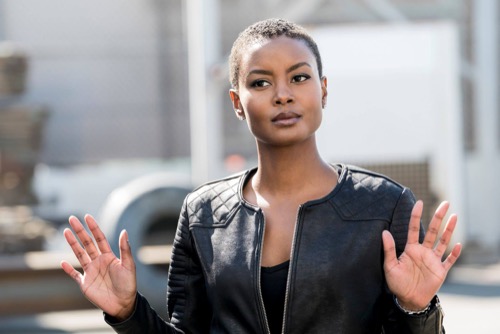 Tonight on CBS NCIS: Los Angeles returns with an all-new Sunday, April 22, 2018, season 9 episode 19 called, “Outside the Lines” and we have your weekly NCIS: Los Angeles recap below. On tonight’s NCIS Los Angeles episode, as per the CBS synopsis, “After a cryptocurrency farm is robbed of over $10 million in Bitcoin codes, Sam and Hidoko go undercover, with Sam resuming a likely compromised former alias.”

A small Cryptocurrency farm was attacked on tonight’s all “NCIS: Los Angeles” with one perp making it off with enough access codes to steal as many bitcoins in storage as so he wishes.

Unfortunately, the perp used to have a partner that he just so happened to abandoned at the scene. The man later identified as Mark Nichols had been shot and left for dead. His partner hadn’t even waited around to at least try to save him and so he didn’t know that Nichols survived. Nichols had still needed an arm sling and was more or less safe now that he was with the proper authorities though he wouldn’t talk. He had no reason to be loyal and still wouldn’t tell either Kensi or Nell a thing. They had asked about his partner and the people that hired them to break into cryptocurrency because they had reason to believe that both men could have been involved with their old nemesis Barris Stone.

Stone was in the drugs trade. He was considered to be the European Pablo Escobar and had such a tangled web of people that worked for him that NCIS had needed a criminal’s help to take down a District Attorney on Stone’s payroll. The criminal they used to do was King. King had gotten close to Sam and he had been the one to flip her. King told them everything she knew about Stone’s dealings in the state and the team were hoping to use that to eventually get DA Gibson to flip, but the man dead in transportation and so Stone possibly being back was something they all needed to confirm. Sam went undercover for that case. He had been known as a swindler named Switch and he suggested using that alias again.

Mosley knew that would be their best to getting close to Stone again and so she suggested Sam visited King beforehand to see if his alias was still viable. She hadn’t wanted there to be any surprises in the field and hadn’t even wanted to trust Sam going to see King alone. Mosley had assigned Hidoko to be Sam’s partner on this because she knew Callen was going to be busy. Callen had been away from the team dealing with his girlfriend Anna and her problems with ATF, so by the time he returned, Mosley thought it would be best for him to work surveillance with Deeks. Deeks had been sent to watch a woman named Sasha Channing because she was Stone’s go-to woman in the states.

If Sasha was willing to meet with people like Nichols then he had to have had something to offer her or an assignment given by her to him. Nichols had been asked about Sasha and he hadn’t wanted to say anything until he could get some reassurances that he would be safe. He wanted to be told her was safe and the two women had promised just that. They also reminded him that he had a score to settle and so he did crack after that. He told them that Sasha had reached out to be him as well as his partner Eddy Davis for a job. They were supposed to get the keycodes and their reward would be them running a certain part of her employer’s many businesses. She wouldn’t tell them who her boss was and so the women instead showed Nichols some pictures.

Nichols was able to pick out Sasha and he saw Stone at the meeting. He said Stone had attempted to see everything while not be seen himself and that he had only gotten a glimpse of the man, which was more than enough. That had connected Stone to the theft at the bitcoin farm and so Sam went ahead with meeting King. King had seemed like a very great friend. She had grown close to Sam after they worked together and he had wanted to believe her when she said he was safe. He just hadn’t been too sure and so he robbed an old mark and that mark had clearly still believed he was Switch rather than a federal agent. Sam had thought that added assurance meant King had been telling him the truth and so he went to an arranged meeting with Hidoko.

They pretended to be offering their expertise for the job that Nichols and, when their guards were down, the men shot Hidoko and made off with Sam. Sam had been set up. He later learned King had told them that they were heading Stone’s way and so she used Sam to get close to Stone. Stone had made her life miserable and she wanted him dead yet had used Sam to get close enough to shoot everyone that stood in the way of her having a better life. The only person she wasn’t going to shoot was Sam. Sam had had feelings for her and she had feelings for him. King told him that she was sorry that she did that and that she wanted to start over somewhere else. And she had asked Sam to go with her except he couldn’t.

Sam said he couldn’t run from who he was and so he got King to safely stand down when the rest of his team rushed through the door. Sam had suspected that King could have been lying to him and so he placed a tracker in her brace. That’s how his people and safe Hidoko (who had only gotten shot in her bulletproof vest) had found out where King went once she left witness protection. So despite what King felt for him or what he felt for her, they were never going to work and Stone inadvertently proved that to them.

And Mosley asked Sam, in the end, to figure out whatever it is that was going on with him.