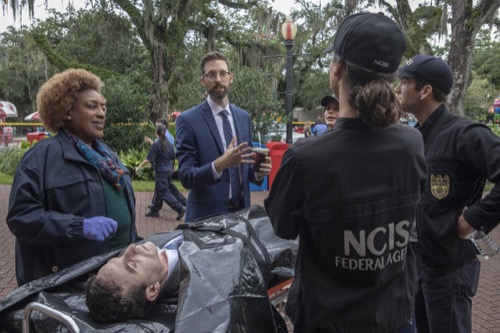 Tonight on CBS NCIS: New Orleans returns with an all-new Tuesday, October 9, 2018, season 5 episode 3 called, “Diplomatic Immunity,” and we have your NCIS: New Orleans recap below. On tonight’s NCIS: New Orleans episode as per the CBS synopsis, “NCIS investigates the murder of a Navy intelligence officer killed during a conference for foreign diplomats, and the key witness cozies up to Sebastian. Also, Pride has some trouble adjusting to his new position at the agency.”

A man was found murdered at an amusement park on tonight’s all-new episode of “NCIS: New Orleans”.

The man was later identified thanks to his fingerprints. His name was Lt. Commander Spencer Morrison and he was a diplomatic officer in town for a special delegation on trade. His death was the first case that the team had under Special Agent Hannah Khoury. She was the one that took the place of Pride’s when their original boss decided to take that job as the Special Agent in Charge and so the team could have decided to hate Khoury on principle however she was actually a good as well as a great boss. She assigned LaSalle to go back to the office in order to look into Morrison further because she wanted more on the man that was the foreign office was willing to give and while he was doing that she decided to go with both Gregorio and Sebastian to the conference center.

Morrison had attended one of the conferences on the night he died. Khoury and the others had gone to the hotel and had talked to everyone using their various language skills. Both of the women hadn’t found anyone with information and so Sebastian had thought he got lucky. He had been struggling with getting by with his high school Spanish when someone came up to him and offered her services. She introduced herself as Carmen and she asked the ambassador in correct Spanish if she had seen Morrison. The ambassador hadn’t seen him while Carmen said she did. She had to go back to work right afterward and so she asked Sebastian if they could meet up later for drinks. She and Sebastian had had this vibe and he had been happy to accept drinks.

The ladies had even seen how happy he was to accept drinks. They had asked him to focus on the bigger picture despite his personal interest in Carmen and so they went back to headquarters where they found out they kept hitting roadblocks with naval officials. The team had found out that Morrison had been killed by someone skilled if not a professional hitman and so they knew that something was going on that the officials hadn’t wanted to tell them yet they wouldn’t talk to NCIS and so Pride stepped in. He found out some of the details of the case and had pulled strings to reveal who Morrison really was. Pride said that Morrison was a covert intelligence officer and that he was in town tracking down something called the Khalifa Briefs.

The briefs was an assortment of papers and wire transfers that connected a group of people to illegal banking practices. It could also takedown some of the biggest names around the world and so the team would have had a hard time tracking down just one suspect if Patton hadn’t come through. He found some additional security cameras at the amusement park and had gotten image of the killer. The killer was a woman and unfortunately two agents recognized her as Carmen. Carmen was still out for drinks with Sebastian and so Gregorio raced to warn him. He was at bar when he finally decided to answer his phone and by then Gregorio warned him to play it safe. She had come to the bartender to settle his bill and that’s when Gregorio told him everything.

Gregorio said that they could bring Carmen in for questioning and Sebastian had put a stop to that. He said Carmen told him that she had a video of Morrison on the night he died and that she had taken it because she had been super excited about seeing something so spy like, so Sebastian said he should at least get a peek at this video. He told Gregorio that Carmen left her phone in her room upstairs and so he agreed to wear an earpiece if he could go see the video first. Gregorio hadn’t liked it and she only agreed with the plan because she knew she would be nearby if he needed help. So Sebastian saw this video and he saw that Morrison had been talking to a mission diplomat by the name of Mikael Basara.

The team had been looking for Basara since they found out he was the only one missing from the conference that morning and so Sebastian grilled Carmen about this video while Gregorio checked in. She initially just wanted to tell them what Sebastian saw and instead they were the ones with news for her. The team tracked down Basara’s phone (thanks again to the strings Pride pulled) and he was still in the hotel. Gregorio was assigned the tack of safeguarding Basara and Sebastian was supposed to have stayed on Carmen however Carmen had secretly cloned his phone and she had heard what Gregorio said. She then trapped Sebastian in his room and trapped Gregorio in the elevator while she ran up several flights of stairs to get to Basara first. And Sebastian knew he couldn’t allow Carmen to kill Basara, so he went outside to see if he could climb up the balcony.

Sebastian had just started to climb when Basara was thrown head out of the building and the one person that Sebastian saw even close to the scene had been Carmen. Everyone assumed that Carmen had killed Basara liked she did Morrison because she had been after the briefs and they all hated the fact how it got Pride in some trouble on his first day. He had pulled strings and as it happens he also used some of his resources as the boss to tap Basara’s cell phone. If he hadn’t have done that then Basara might still be alive! It was what everyone around Pride thought at his new job and so he couldn’t afford to make any more waves though that’s what his team later asked of him.

Sebastian had been at his new home and was moping around when Carmen broke in. She hadn’t wanted to kill him and so she allowed his friends to arrest her because she said she had something they would want to hear. Carmen said she was British Intelligence. She said that she was after the Khalifa Briefs and that she hadn’t killed anyone. No one on the team had believed only Sebastian had been the only one to check her story. He couldn’t have proved if she was MI6 or not and so he did prove that she hadn’t killed Basara. Basara had definitely been killed by a man and so there was no reason to doubt Carmen’s story because she still had a few more things to say. She said she got the key to the briefs out of Basara’s hotel room and that it opens a diplomatic bag.

She still believes the bag is at the Saudi Embassy and so she was willing to go there to look for it only she wanted backup. The team thought about it and they believed it could be doable as long as they were very quiet at the Embassy. The Embassy was basically the one place they couldn’t go as themselves and so Pride went as Khoury’s plus one meanwhile Sebastian went as Carmen’s date. Carmen was the only allowed to break another country’s sovereignty by touching their diplomatic bags and so Sebastian was supposed to be her cover. He still hadn’t trusted her all that much and so before long he planted a tracker on her. She hadn’t known about it and so when she found as well as switched out the flash drive – he had a way of tailing her.

Before long they did get in trouble with the Saudis and they also found out that one of the Ambassador’s team had murdered Basara and Morrison, but they allowed the ambassador to fire his man without getting pulled in on what’s been happening and that helped cleared the air.

NCIS wrapped up a big case by bringing in the killer and their star rose even higher when Sebastian later recovered the real Khalifa Briefs.

He agreed to take the real thing and handed over if no one asked any questions about Carmen.

The story was that she evaded capture and so no one knew that Sebastian let her go.