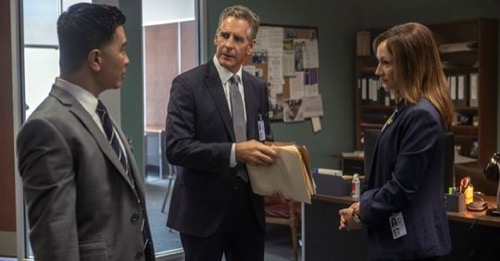 Tonight on CBS NCIS: New Orleans returns with an all-new Tuesday, October 16, 2018, season 5 episode 4 called, “Legacy,” and we have your NCIS: New Orleans recap below. On tonight’s NCIS: New Orleans episode as per the CBS synopsis, “A petty officer is found murdered under a shrimping boat, and the NCIS investigation uncovers a conspiracy in the tight-knit local fishing community. Also, Lasalle awaits the final results of the tax fraud investigation into his family’s company.”

A shrimping boat was out on the water when a body became stuck in its propeller on tonight’s all new episode of “NCIS: New Orleans”.

The body turned out to be Petty Officer Aaron Trang. His remains had gotten mangled because the people on the boat hadn’t realized at first what was happening and so NCIS had worked with the Coast Guard in order to recover all the bits and pieces. By time they did find the full remains of Trang, they were able to rule his death a murder. His hands and legs were bound by a fishermen knot. It also showed that it might have been anchored by something and so the waters were used as a dumping site. Wade’s initial findings concurred with that because she found evidence that showed that Trang was dead long before he went into the water and so the team still find the murder scene as well as contact the family.

Trang was reportedly close to his cousin Amy. Amy was supposed to be with her father who had his own shrimping boat and her father said she never showed. The team were concerned about that, but her father wasn’t and he didn’t seem to care about what his nephew either. He said that his nephew should have taken over the boat when his father died and instead Trang had joined the Navy. The man went on to complain about how his daughter was just the same and that’s why she wasn’t where she was supposed to be. Agents Khoury and Gregorio explained to him that if his daughter missing so soon after his nephew’s death that she could be in danger and it didn’t seem to faze him because of the situation was in.

The fishing community was struggling. They were losing money and most of the people that own boats were out on the water seven days a week with little rest. Mr. Trang thought that’s where his focus should be and so it was NCIS that went looking for Amy. She was later spotted on another boat and the team got to her though not a moment too soon. Amy and her friends were found just about to blow up this other boat when they were found. The team talked to Amy and they asked if her about her actions only she hadn’t been apologetic. Amy explained how Triton Fishery was slowly pushing the local shrimping boats out of business and how she suspected they were poisoned the waters.

Amy said Triton was known for doing this and that’s she had to stop them by any means necessary. She believed that because no one got hurt that she would be put in juvenile court and so the NCIS agent informed her about her mistake. She hadn’t known that there were two individuals were sleeping on the boat and that even if her plan was averted it didn’t mean she could be tried as an adult for attempted murder. Once Amy had been snapped back to reality, she had been willing to answer questions. She hadn’t known that her cousin was dead and had genuinely shock when she found out. Amy was asked if her cousin died because of what she was up to and she said “no” because Aaron tried to talk her out of it.

Amy said her cousin wanted to shut down Triton using the proper way. He began an investigation into their practices and the team later found his findings. He wasn’t investigating everything from money trails to the moment the community began to suffer hardship. Petty Officer Trang had made the connection between when Triton first came to the community and tried to buy out the local dispensary. The owners hadn’t wanted to sell and so someone stayed on to fish in the waters, but problems came up after that and so NCIS investigated whether Trang was onto something. They talked to local end of Triton and a man by the name of Wilkins said that they hadn’t done anything wrong. And that there was no hard feelings when the couple that owned the dispensary refused to sell.

The team continued with their investigation and they found the sample of the waters that Trang sent a friend in the navy. The water came back clean. It hadn’t been poisoned and so the team tried to figure out that mystery because they knew something was happening to the haul. So that’s when one of them said why poison the water when they could just poison the dispensary. The dispensary treated everything coming in from the water and if it had been contaminated or sabotaged then the couple that owns the place could be willing to say. The team went out to the dispensary and spoke to the owner’s son. Eddie Dao said that they were cleaning the place according to the strict guidelines and so he didn’t think that the federal agents would find anything.

Except Sebastian still ran the necessary tests and as they were waiting there a disturbance outside. Some of the locals had found out that someone set fire to Mr. Trang boat and once rumors got out about the dispensary – there was nothing the agents could have done that would have stopped the locals from Wilkins. Wilkins and his crew were beat up and the fighting could have gotten worse if the locals hadn’t found the industrial acetone in Wilkins’s boot. He denied that he put there and he said someone was setting him. Either way the agents wanted to talk to him. They questioned him about the relationship with Triton and what was going on the dispensary. And that’s when dispelled a rumor for them.

Triton only approached the dispensary after someone from the family claimed they were selling. With the tip they got from Wilkins, the team looked into Eddie Dao and they found out he had been trying to sell the dispensary. The only reason the sell hadn’t gone through was because his family found out what he was doing and put a stop to it. The parents didn’t want to drive up prices with their local community and so Eddie grew resentful. He poisoned the dispensary which Sebastian had found evidence of and he must have killed Trang when Trang found out the truth. And the team weren’t the only that came to the conclusion because they found out that Trang had been killed on his family’s boat and had informed his uncle.

Trang’s cousin Amy had put the pieces together when she learned everything. She would have taken things into her own hands if Khoury hadn’t stopped her and so Khoury wanted to know how she put it all together. Amy said her cousin and Eddie were friends. They had both gotten out and only Eddie had been resentful when he forced to come back. Her cousin hadn’t been like because he had been proud of their home and, in the past, he had no qualms about inviting Eddie onto the family boat. And so on the night her cousin borrowed the boat and was killed, it could only have been Eddie. Eddie who wanted to sell and would have made a fortune if his plans had actually worked out for him.

The team used Amy to get a confession out of Eddie and  later they were able to arrest for everything.

But LaSalle wasn’t there to see it. His family was being sued by the IRS because of the money his father stole and then gifted back to his employees and so LaSalle came to a deal in which he would sell the company. The money from the sell would just about pay back what he owed and that saved LaSalle from being in debt or from losing his job. It turns out federal agents lose their clearance if they have a debt that might make them susceptible to a bribe. And so there went the family business.