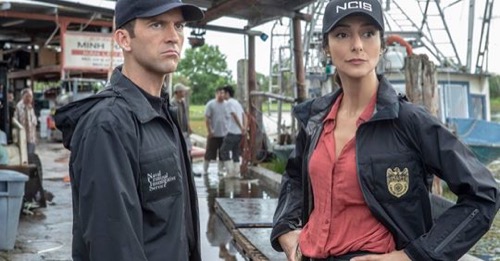 Tonight on CBS NCIS: New Orleans returns with an all-new Tuesday, October 23, 2018, season 5 episode 5 called, “In the Blood,” and we have your NCIS: New Orleans recap below. On tonight’s NCIS: New Orleans episode as per the CBS synopsis, “Pride’s father, Cassius Pride, is wrapped up in an NCIS case involving a notorious unsolved casino heist from several years ago. Also, Pride meets a family member he never knew existed. The episode marks the series’ 100th installment; and also features Nathaniel Rateliff & the Night Sweats performing “Hey Mama” and “You Worry Me.””

The police found four dead white Nationalists outside of a container on tonight’s all-new episode of “NCIS: New Orleans”.

It was Wade that told the sheriff they should call Pride. Pride didn’t know why he was called to the scene seeing as none of the dead were servicemen or former servicemen and so that’s when Wade showed him what was in the container. There was a box of old children’s toys and the boys all seemed to belong to Pride. Pride didn’t know how they got there, but he did have suspicion and so he let the others in on who suspected. He told them he thought it was his father’s Cassius Pride. The elder was out on parole and he hadn’t checked in with his parole officer in over a week. Pride agreed to pass the case of the four dead and his missing father onto NCIS and once they took over the investigation they tested the blood they found at the scene.

There was evidence that someone had walked away from the carnage and so the blood gave told them who that was. It matched James Edwin Boyd. He’s been in and out of trouble since he was a kid and never had turned violent until now. He lived at his mother’s old place that he inherited when she died and Cassius Pride was last seen heading in that direction. The team called Pride to tell him that they were going to the house to most likely arrest his father and he wanted to come with. Pride hated his father and so he wanted to be there to arrest him however the team went to the house and were practically ambushed. They had to fight their way past another proud member of the white Nationalists only to tied Cassius tied to a chair and beaten up.

Cassius said he was the victim. He had gotten kidnapped and he didn’t know why though they talked to the person holding him and she said her friends were the real victims. The white Nationalists had offered Cassius protection when he was behind bars and he never had to worry about his old enemies coming after him. Then he gets released and he doesn’t want to pay them what they owed. The Nationalists found out he returned to the life of crime and that he even had a new partner, so that’s when he was kidnapped because the group wanted three million dollars. Cassius said that the money was at the container and so Pride wanted to know how anyone could believe that.

Pride said Cassius didn’t have that type of money. It turns out he had been wrong because Cassius did have that type of money after he robbed the River Grand Casino. The heist was legendary because neither the money nor the culprits were ever found and so Pride later attacked his father. Cassius had surprised him a lot in the past and, still, he never thought his old man could or would rob a casino. If there was money inside that container, it was moved years ago and so Pride tried getting answers out of his father. Cassius said that he didn’t have the money and he had no idea what happened to it. He also said he was still banged up and so he received an escort to the hospital where he later escaped.

Only by then, Pride had a secret weapon to finding his father. He had found Jimmy Boyd and that’s when he remembered when he last saw him. Pride recognized Jimmy as his half-brother. They had seen each other one time when they were kids and Pride was supposed to stay in the car, but they were brothers and Jimmy was that bad. He’s been clean for the last eighteen months and then their father was released. The old man hold sway over Jimmy and so Jimmy tried to help by getting the money. It wasn’t in the container and Jimmy had no idea where it was except he did know where their father was. Jimmy took Pride to a forger he knew and they found out that Cassius had already gotten a new identity. And they also learned he hadn’t asked for one to be made for Jimmy.

Jimmy hadn’t cared though. He still believed in their father and that’s why he had taken the money to the container. His father had asked him to do it and so he knew where his father’s car was. Jimmy led Pride to Cassius and they would have gotten their father, but then two vans pulled up and began shooting at them. Pride was holding them off when Jimmy said he should try to get their dad and that was a little difficult to do because Cassius had seen the shooters. He was doing his best to drive away and it didn’t matter that he was leaving his two sons to face gunmen on their own. And so Jimmy had gotten kidnapped. The shooters took him with them when they peeled out of there and Pride went back to his team for their help in rescuing his brother.

Pride wanted to know who had been shooting at them and the team had an answer for him. They said they believed the manager at the casino back then had been involved with the heist. Gina Powell had planned the heist. She went to Cassius to arrange the things and he got the bank robbers. There were two men believed to be the robbers and they both went to jail for a different crime where they had been murdered. That too had been Gina. She helped steal the money from the mob and she was still working for them. Gina killed the thieves because she wanted to cover her tracks and the only other person she needed to get rid of was Cassius. Cassius had been on his way out of town when Pride found him and arrested him.

Cassius had hidden the money inside his car and Pride recovered it. He then took that money to Gina as a way to ransom his brother yet the mob had found out what Gina had been up to and they promptly killed her. They also wanted to kill Cassius and so that’s when Pride’s people moved in. They took out everyone and even Jimmy had moved in to save his brother’s life. The two guys had really bonded over their irresponsible father. It was just Cassius that was the pain. He had been angry about Pride destroying his car to get the money and then said he was going to miss the boys only he had to leave. Cassius agreed to testify against those Nationalists’ meth business and in exchange, they would put him in Witness Protection.

Both Pride and Jimmy thought he’d be in trouble again and until then they decided to finally get to know each other.