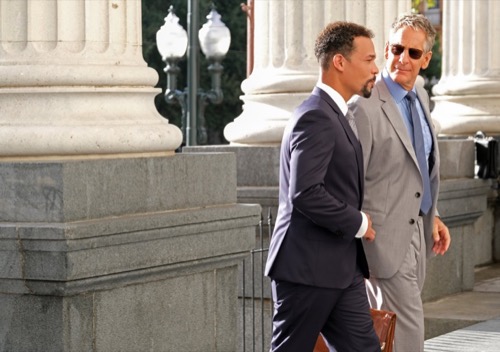 Tonight on CBS NCIS: New Orleans returns with an all-new Tuesday, December 4, 2018, season 5 episode 9 called, “Risk Assessment,” and we have your NCIS: New Orleans recap below. On tonight’s NCIS: New Orleans episode as per the CBS synopsis, “The NCIS team investigates the murder of a Navy contractor who, unbeknownst to anyone, lived two lives for decades, with two wives, families and careers.”

The team investigated the murder of a Navy contractor on tonight’s all-new episode of “NCIS: New Orleans”.

The victim’s name was Jacob Bell. He was driving when his killer wrapped an industrial wire around his neck and was able to strangle him to death. It was a gruesome way to die, but somehow there hadn’t been anything in the way of evidence left behind. The crime scene had been cleared of anything and no one knows how long the killer waited before striking. There were just some many unknowns that the team thought they could ask Jacob’s wife for details and unfortunately she hadn’t known much. Molly Bell said that her husband was constantly on the road and that outside of the house she didn’t know the details. And so the team decided to look into one of those business trips.

They found footage of Jacob at the airport. He dropped off his car and hadn’t gone inside like they thought he would. He instead went over to a different car and that car had been registered under the name of Jacob Landry. The driver licensee for Landry showed that he was Jacob Bell and him two other jobs as well as lived in Mississippi. It was about an hour in travel time and so two NCIS agents went over there to the address listed on Jacob’s second ID where they found something. They found Jacob’s other family. He had a second wife and a teenage son at his second home. Neither of them had known that Jacob had another family in Louisiana. They were just as shocked to learn that Jacob also had two other jobs he was working.

The man had lied to everyone. He was so good at it that even Sebastian had been impressed because he had no idea how anyone could work four jobs and have two families in two different states yet he had stayed in New Orleans with LaSalle because it was up to the two of them to go through Jacob’s office. The office had seemed normal at first and so the team thought there was nothing until they found the hidden room. The room held lots of computers and several passports. Plus, it was rigged to blow if anyone trespass and so Sebastian only barely got out of that room, only he went back in to grab evidence and what he found pointed to Jacob being a sleeper spy. It was impossible to say who he worked for and so the team had to assume.

They assumed that the only country that would be audacious enough to get a sleeper cell to infiltrate the navy was Russia. They then tested their theory and eventually confirmed it. Jacob was a Russian spy and he had a partner in the city. The two were talking about a task they carried out in New Orleans and Jacob had been skittish. He thought this new mission was too risky and had only gone ahead with it because his partner pressured him. The team couldn’t decipher the rest of the message because they didn’t have the cipher and so they tried to work with what they had. They found a few numbers that they believed might be the signature for longitude and latitude. And it showed that whatever was happening somehow involved a park located in New Orleans.

The team went there and waited until they saw anything suspicious. So they had been surprised when they saw Mrs. Landry. The woman claimed not to have known about her husband’s other life or that he was a spy, but she showed up at the park rocking a blonde wig. The team wanted to wait to see who she met up and their plan would have worked if it wasn’t for Molly. Molly followed her husband’s other wife and she demanded to know what the other woman knew about their husband. When the team saw what was happening, they decided to move in and that’s when the women saw them. Mrs. Landry dragged Molly to a car and they sped away from the scene. Just not before the team saw who was driving.

The driver of the getaway car was Charlie Landry. Charlie was Jacob and Amanda Landry’s son and so it seemed like the Landry were all in on it. They were spies and knowing that the family might have lied to them – the team went looking to see if Jacob traveled on any of his many passports. He did! He would visit cities around the same time that someone on the CIA Watchlist would mysteriously die, so it was clear that Jacob was a hitman. He also changed up his methods several months ago and was recently killing people using a Russian nerve agent. Which explains why there were antitoxins found in his blood. Jacob would have to take the cure before he could assassinate someone on the list.

The team didn’t know who the Landry family were supposed to kill though they did know that Molly Bell was in trouble and so they thought they got lucky when Charlie’s car came back up on the radar. They later went to the location and found nothing in the car. Only Molly’s kids eventually arrived on the scene and they said their mom had called them saying she needed help. She said she was inside the store and so Agent Khoury went to go check. She looked in and saw Molly and a bleeding Charlie on the floor. The teenager warned her not to come in because the nerve agent was in the air and he didn’t want to kill her. And Khoury took what he said and ignored it because she hadn’t wanted to leave Charlie.

Khoury saw to Charlie’s wounds and, as they waited for a hazmat team, Charlie told her everything. He said that Amanda and Jacob weren’t his real parents. They were his handlers who have been training him for missions since he was twelve. Charlie hated the kind of life he had been forced to live and that’s why he believed he had to kill Jacob. Jacob had fallen in love with Molly and had started a real family with her however he never forgot what he was and had started to train his real children to one day join him in the business. And so he had to die, Charlie didn’t want Leah and Sam to go through what he did and so he thought he was protecting them by them away from their father.

What he didn’t know was that Amanda was also a threat. She had used the nerve agent on Molly because she wanted to get her hands on the kids and so Charlie had fought her. He took a bullet to the leg in the ensuing fight and Amanda left him to die with Molly, but Khoury had called for backup in time and so Charlie, as well as Khoury, got some help. The hazmat team arrived with the antidote and save them even if they couldn’t save Molly. Molly died protecting her kids and that’s something they needed to be told. They, unfortunately, went with Amanda when she showed up at their hotel and that hadn’t left the team with many options. They knew an assassination was going down and looked into who could be candidates.

They went through politicians and important people from the city though they soon learned that a Russian dissident was in town for an interview. They found out where this interview was happening and arrived in time to save the poor woman – and also to stop Leah. Leah thought she was following through on what her father wanted and so learning that her father lied to her and that Amanda killed her mother had been enough to knock common sense back in. She had put down the syringe and had gone quietly when the agents took her to her brother.

The fact she hadn’t killed anyone was what saved Leah!

The feds decided she should go live in protective custody with her brother and it was hoped that one day the kids would be able to put the past behind them.