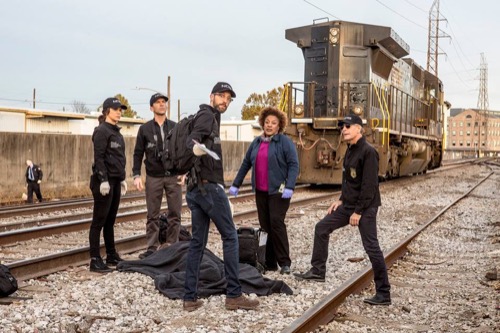 Tonight on CBS NCIS: New Orleans returns with an all-new Tuesday, February 6, 2018, season 4 episode 14 called, “A New Dawn,” and we have your NCIS: New Orleans recap below. On tonight’s NCIS: New Orleans episode as per the CBS synopsis, “The NCIS team investigates the murder of a petty officer who was in town to help a refugee family being recruited by terrorists. Also, Wade works on the special election campaign for Mayor Zahra Taylor that takes place during Mardi Gras.”

The city was in the middle of the mayoral election on tonight’s all-new episode of “NCIS: New Orleans” when Dr. Wade was forced to abandon her candidate for another case.

Wade was acting as the campaign manager for Mayor Zahra Taylor. Taylor was a longtime friend of hers and she believed in changing things from Hamilton’s old day back when corruption ran rampant throughout every political office possibly, but a lot of people don’t like change. They liked the way Hamilton ran things because it allowed them to get away with their own corruption and so both Taylor as well her campaign manager found themselves dealing with quite a few underhanded tricks. Like the fact, someone decided to hold the election during Mardi Gras when the city would be crowded with tourists and most people were out trying to make a profit not thinking about who they’re going to vote for!

Therefore, it wasn’t a good time for Wade to step away from the campaign to focus on a case except she couldn’t let anyone else handle it for her. She was the medical examiner and so she knew it her duty to run an autopsy on CTI Chief Erica Croft. Croft’s people back in Washington claimed she was in town to study up more on the Arabic language and that’s why she had visited the refugee camp when she came to New Orleans, however, Erica had gotten into a scuffle and had been thrown in front of an oncoming train which didn’t seem like things that would happen to someone merely visiting to study the Arabic language. So that’s when Pride remembered. He remembered that men and women that work in the CTI often monitor counterterrorism intel.

The team figured that might be the real reason why Erica came to town and so they retraced the woman’s steps. LaSalle and Gregorio were sent to the refugee camp to talk to whoever it was that Erica was meeting with and so the guy that ran the place introduced them to Noora. Noora Saadi had been in her living quarters with her son Shariff and when they heard the agents announce they were NCIS – Sharif made a run for it. He managed to elude LaSalle and was able to escape out the back through his mother hadn’t gotten so lucky. Noora had still been in the apartment when Gregorio came across a jihadi flag and a guide on how to make a bomb.

The bomb part was what concerned everyone because they believed that might be what Erica was investigating and it could also be the reason she was killed. But the team tried to talk to Noora about her son and she refuses all overtures. She had a deep mistrust of the police since they killed her husband back in Syria and so she didn’t trust the team with the life of her son. Shariff was all that she had left and she knew that he wasn’t a terrorist. She said that her son wasn’t the type to believe in all of that and so the team brought in someone else they thought Noora might be willing to talk to.

They called in Wade and the fact Wade wasn’t someone with a badge had helped Noora to talk. She told Wade that her son had been approached by recruiters and that he hadn’t wanted to be part of anything. She said her son didn’t want to hurt anyone and NCIS were able to corroborate the story. They found security footage of someone following Erica on the day she died and, in that same footage, Shariff appeared to be stopping that man or at least trying to from going after his intended victim. So Noora had been right. Her son wasn’t a terrorist and he had also tried to save Erica the day she died. And so Wade spoke quite bluntly to Noora.

Wade told Noora that she had to turn her son in because he was at more of a risk with the jihadist than he was with NCIS yet Noora had wanted some guarantees first. She wanted a guarantee that her son wouldn’t be harmed and once she got it she set a trap. Noora messaged her son using an online forum and he later met with her on the boardwalk. Shariff had been so happy to see his mother again that he hadn’t even bothered to get upset about NCIS being there or realize that he was being followed. The same group that was trying to force him to carry out a terrorist attack had used the message his mother sent him to find him and then they kidnapped him in broad daylight right in front of Pride.

Pride hadn’t been able to get to Shariff in time before he was thrown into a van, but he and Noora both heard Shariff’s message for them. He was trying to tell them that the planned attack was against Mayor Taylor. Taylor was later notified that her life was in danger and that could be ISIS so Pride asked her to protect herself. He wanted her to cancel her campaign commitment until they find the group bent on terrorism and she refused to do so. She said that she couldn’t afford to let anyone deter her from running for Mayor because she needed to be able to win on her own accord rather than be a stand-in for Hamilton. And so Mayor Taylor continued on with her campaign despite Pride’s personal feelings on the matter.

He had wanted Taylor to stay safe while they find who wants her dead and without her cooperation, he decided that he could try to find the terrorists before they acted. Pride looked into whoever was buying up the ingredients to the bomb and they followed the breadcrumbs until they came across a warehouse, however, just as they arrived, they saw someone that looked like Shariff in a boat and so Pride cleared out Taylor’s rally that was right by the river. But he had also tried firing warning shots to stop Shariff and when that didn’t work – he was forced to shoot and cause the boat to explode while it was still a good distance away from the gathering. So Pride thought he had killed Shariff and broken his promise to Noora.

Only that hadn’t been Shariff he killed. That had been another man who was dressed to look like Shariff because the group that wanted the mayor dead had wanted the feds to believe they had been stopped in time when really they were going to try again. They reached out to Noora and told her to kill the Mayor and that they wouldn’t hurt her son if she followed the plan. So Noora waited for the Mayor to meet with her because Mayor Taylor was the type of woman that wanted to tell Noora in person that her son wasn’t dead and she was going to use the bomb that had been strapped to her though Wade stopped her.

Wade told her that’s not what was best for her son and she begged Noora to Pride’s team time to find Shariff, but by the time they did find him, they also learned the group that was trying to set him up hadn’t been Isis. It had been a bunch of mercenaries hired by Taylor’s competition and he had tried to paint Taylor’s open-door policy as dangerous to the city except Shariff didn’t play ball. He kept trying to stop the group every step of the way and upon hearing his voice – his mother took her hand away from the trigger. So Mayor Taylor went on to win the race and the man that had tried to stop her was now facing a life in jail for terrorism.