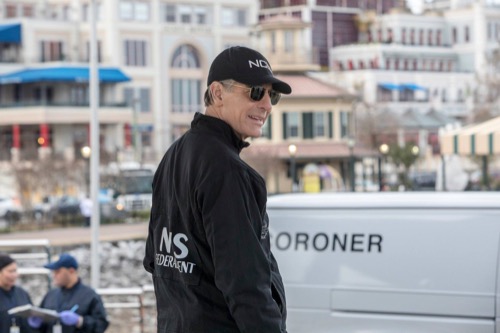 Tonight on CBS NCIS: New Orleans returns with an all-new Tuesday, April 3, 2018, season 4 episode 19 called, “High Stakes,” and we have your NCIS: New Orleans recap below. On tonight’s NCIS: New Orleans episode as per the CBS synopsis, “Percy and Lasalle go undercover at a high-stakes, underground poker game after the organizer targets players with access to a naval research laboratory. Also, Laurel Pride visits her dad during spring break to discuss options after her upcoming graduation.”

Percy decided to stay with her team on tonight’s all new episode of “NCIS: New Orleans” because she had been afraid of letting everyone down.

Percy had been offered that job with the FBI. She had gone after it because of the many opportunities she knew that it could give her and so she did want to accept it when she got it, but Percy turned the job down because she hadn’t wanted to hurt her team. Her team was her family and they had been happy that she decided to stay. They told her that they would have missed her if she left and so the only one that had any misgivings about the choice Percy made had been Gregorio. Gregorio had been the one person that questioned if Percy was staying for all the right reasons and that’s why she hadn’t joined the others in jumping for joy. She was just sure that there was something off about the whole thing.

Gregorio had planned on talking to Percy when it was the two of them however the team later got a case that took priority. They were called to the scene of an accident in which a truck driver ran a red light and almost hit the Navy cycling team. The driver had been able to swerve in time, so no one was hurt and the driver found out he had been carrying more than just crates. The crates had fallen over when the driver swerved and so he along everyone else spotted the body. The body was Yoman Bennett. He had been an office manager at one of the local naval bases and it was clear to everyone he had been murdered. He couldn’t exactly stuff himself into a crate that was going out of town and so his killer wanted him gone at all costs.

Bennett was found with one bullet to the back of the head and unfortunately the bullet was specially designed to implode upon impact. It was maximum damage and didn’t leave a trace. It had sounded/looked like he had been killed by a professional and so the team did their best to try figure out why. They had looked into Bennett and there wasn’t much to find. He lived under the radar and the only thing that was of any note had been his gambling. Bennett lived to gamble. His roommate said he was forever on the gambling river boat and a further look showed he had cleared out his entire bank account on the night he died. And so the team believed he had taken money off of the wrong person.

Pride had had the others look into who might have had a grudge while he chose to stay behind at the office because his daughter was in town. She was looking for an apartment to rent after college and her father had offered to help though Pride noticed that something was off with Laurel. Laurel wasn’t that serious about apartment-hunting and she didn’t seem all that concerned about finding a job after college. College was going to be wrapping up within a few months and so Pride didn’t know why Laurel was afraid to make a decision. He had tried to ask her about it and she had told him that it was nothing when he could just see that something was going on. He had tried a few times to talk to Laurel and, right as she was about to open up, he had gotten called into work.

The team had found out that Bennett had gotten involved in a high-stakes poker game. He had approached by a woman nicknamed “the Dragon Lady”. She was someone that invited the big spenders to a private exclusive game and Bennett wasn’t her type. His bank account was in thousands and she would normally go after millionaires as well as those in organized crime. The team believed the mafia could have had something to do with Bennett’s death and so they had needed Pride’s authorization before they could go about gaining the Dragon Lady’s attention. They knew she would be on the river boat again and Pride was going to have to sign off on the thousands of dollars.

Luckily, Pride was able to sign off on as much as ten thousand and so they sent Percy in. She had learned poker when she was taking down a crime bosses back in her ATF days and that meant she was the best person to send it. Percy had also said that she could handle it and she was right about that in the beginning. She had gone on the boat, had joined a game, and had gotten fifteen thousand dollars up before she decided to take bigger risks. Percy said that she had to gain the Dragon Lady’s attention and so she did that by betting all that she had. She was doing great at first and the Dragon Lady had even made an appearance yet Percy had gotten too cocky and she later lost all of her money right in front of the woman she was supposed to be impressing.

The Dragon Lady lost all interests in Percy after that and she got away before either LaSalle or Gregorio could stop her, so Percy had beaten herself up for that. She blamed herself for ruining the opp and the only thing that had made it better had been when the team figured out the Dragon Lady’s actual identity. The woman known to the gamblers of New Orleans as the Dragon Lady was actually a soccer mom. She had gone through a nasty divorce and had needed to make money which was when created her persona. Her real name was Amy Collins and the team found her by using the fingerprints she left behind on a glass. And so the team brought in Amy as a possibly accessory to murder.

Only Amy freaked when she found out Bennett was dead. She said she’s been waiting for something like that to happen ever since this guy pushed his way into her private games and demanded that she work for him. He went by the name Kirk Young and Amy had been so afraid of him that she had done everything he asked. Like inviting Bennett to a game. She said Young had wanted someone that worked at that naval base at the game and that Young then made sure that Bennett cheated in order to gain leverage on him. He had wanted Bennett to do something and had killed Bennett when Bennett must have refused. Amy also said that Young was looking for someone knew and so Percy asked to be sent in.

Percy had found a way to make it up to the team and so she convinced the others to send her in. She went in as a high roller with a gambling problem and had gotten Young to cheat her out of fifty thousand dollars, but then Young kidnapped her rich boyfriend (LaSalle) and had even kidnapped Amy in case Percy was setting him up. It wasn’t until he had all the leverage he could need that he introduce her to his boss and they revealed what they wanted her to do. They wanted her to sneak them onto the naval base where they could use special software to track every naval vessel in China’s waters. They were Chinese agents and were going to kill Percy once they got what they wanted.

Except she figured out that part. She knew that she had been trying to do everything right because she hadn’t wanted to let her team down and so she got out of her head. Percy crashed the car that she was in with the agents and the others moved in to rescue both LaSalle and Amy. So Percy stopped a plot before it could be carried out and that made her realize that she did want the job with the FBI. She later broke the news to her team and they had been sad to see her go however she knew she wanted to explore the possibility of working for the FBI and so she made a choice that was the best for her. And her team understood.

They didn’t like it, only they were willing to be happy for her and Pride later got the chance to talk to his daughter. She had agreed to move back after college because she hadn’t wanted to leave her father alone and so he assured her that he had family. He was happy with the family he created and he hadn’t wanted his daughter to give up on her dream job because she was afraid of leaving him by himself. He was alone and he told her to get that job in New York which was her dream job because that’s why it had been so hard for her to commit to anything else.