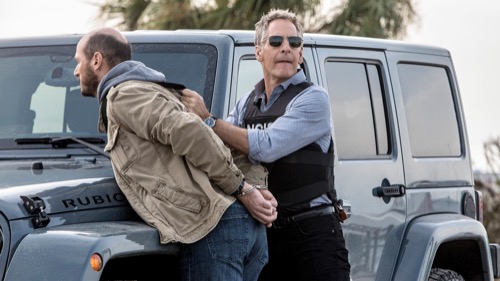 Tonight on CBS NCIS: New Orleans returns with an all-new Tuesday, January 2, 2018, season 4 episode 11 Winter Premiere called, “Monster,” and we have your NCIS: New Orleans recap below. On tonight’s NCIS: New Orleans episode as per the CBS synopsis, “After a deadly armed robbery and high-speed chase is connected to an undercover ATF operation, Percy reconnects with her former ATF partner, Jake Roman.”

Two men carried out an armed robbery on tonight’s all-new episode when they held up an electronics warehouse for a couple of items in their hundreds if nothing else. But NOPD were handling the men on their own and had even cut them off when the robbers surprised them. They, unfortunately, had a machine gun and used it to cut an opening into the police blockade. So not only did they get away, but they also managed to cripple the local police department and killed several good officers on duty that day. Including a good friend to Captain Estes who had been left shaken after everything.

But Pride offered to help in the later manhunt. He wanted to find the men that hurt so many of their local officers and knew that his team had more resources at their disposal. So Pride had his team look into the men because he knew that at least one of them was former Navy. Petty Officer Marcus Tyrell had left fingerprints at the scene and it turns out he had been let go because he was caught secretly selling military weapons however the team ran ballistics on the weapon used on the police officer and it had been one of theirs. It had reportedly been stolen after Tyrell had been let go and so the team suspected he had a third partner.

The guy that had helped Tyrell rob that warehouse hadn’t come up in any of their databases and therefore they knew he couldn’t be the one keeping them in weapons. But Percy had had an idea about who this mysterious third man could be. She said that a known gunrunner she had come across during her ATF days was someone considered to be an expert in stolen military weapons and that he had been spotted not that far from New Orleans carrying out a job with Tyrell. So their third guy was Willard Kurtz and he was one of the most wanted men in their country, but Sebastian and Patton found a way to track Kurtz and his partners.

The guys spotted a barcode on the car the guy used when they held up that warehouse and it traces back to an electronic signal at the Port of New Orleans. But the team races there and they found the only shipment dated to be shipped out just so happens to belong to a small shipping company that shipped out the minimum needed to maintain their own at the port. So everyone knew that the company was a front and they raced to the shipping yard to catch their lead before they could they could disappear however they were caught off guard when Kurtz suddenly turned on his partner. He killed Tyrell and then turned himself claiming he was working a case.

Kurtz even used a code name used for undercover ATF agents to prove that he was one of the “good” guys. But Kurtz wouldn’t tell Pride what mission he was on or which intelligence agency he was with. So Percy agreed to check out the story on her own because an old friend from her ATF days was in town and he normally handled all the undercover missions though Pride asked Percy to take Gregorio with her and that proved to be a good thing. Gregorio was a trained profiler and she saw through Jake in an instant. He had been hiding something and whatever he was hiding had something to do with the woman that was watching their meeting.

So Percy tried to get Jake to talk her and tell her the truth, but he couldn’t because the mission was so top secret that only the woman that was watching them could reveal anything and fortunately she got around to it when she came to pick up Kurtz. Kurtz was working a sting option with the CIA and the woman leading the case was Agent Sutter. Sutter was Kurtz’s handler and she claims to have gotten information on him that kept him under her control. She said that Kurtz was still selling weapons just now the CIA got to see where he was selling them and to whom.

Pride thought that was a foolishly bad plan and he told Sutter so. He told her that she shouldn’t be allowing Kurtz to operate like nothing was wrong and that the man deserved to be imprisoned. But Sutter believed in her plan and pulled rank. She had the DOJ tell Pride to back off this case because Kurtz had nothing to do with the robbery on the warehouse or in the deaths of police officers. She also added that both crimes had been carried out by Tyrell and his childhood best friend James Smith. So Sutter threw Pride that bone believing he would let go of Kurtz and he couldn’t because he knew Sutter had been wrong about the gunrunner.

Kurtz was a career criminal and he was about to sell shipments of military weapons to terrorists if Pride and his team didn’t stop him. But Pride had taken a step back and reviewed why he tends to go rogue so often and he realized that he did have a problem. He made every case personal and so he hadn’t wanted to do that with this case. He reminded everyone that they were allowed to investigate Smith because he was still on the loose and so he had people look into him despite Percy not liking it. She thought that spelled too much like going rogue and hadn’t wanted to get her friend Jake into trouble.

Percy tried to hide it, but she had a thing for Jake and eventually had him over at her place while the rest of the team continued their investigation. But Jake had gotten a text message that she had seen and so she knew that Mission Colossus was still a go. She also knew, unfortunately, that the mission was dangerous and so she went back to her own team with news that the weapons were shipping out that night. So Pride was trying to find whatever he needed to stop the shipment when his techies found out that James Smith was really Hugo James Smith. He was former drone operator and Kurtz paid him a lot of money for what the team could only assume was a drone. And so that had been enough for Pride.

Pride had called his findings in and had been given the go-ahead to involve himself with Sutter’s case. But one problem. Kurtz had killed Sutter and had gotten away with no one the wiser. So Pride and his team then had to find a way to get to Kurtz and all they could think of was the leverage Sutter had. They hadn’t known what it was and had tracked down Jake’s phone hoping he would tell them, but he ended up showing them that the “leverage” wasn’t a what. It turns out that the leverage had been Kurtz’s wife Claire and she had been kept like a prisoner unable to see her family or friends.

But Claire claimed her husband never cared about her. She said that he married her because she handled his money and so she was moved from place to place under strenuous conditions to keep him in line. So everyone had assumed that Kurtz decided to leave her behind when truthfully he never go onboard the shipping carrier. He had actually bought a drone and had used to later get to his wife despite her armed escort. And so the team tried to find the couple though they hadn’t been allowed to put out a bolo because Pride hadn’t wanted the drone used in the city so they instead track down the drone.

They tracked the drone to sugar mill outside of town and Kurtz had appeared to load his plane for an escape with the wife. She had lied earlier because her husband did care about her and had told her the entire plan when they were last allowed to see other. But the couple were going to use the drone to keep anyone from following them and so Sebastian along with LaSalle had had to get to Smith. Smith was still operating the thing and Pride knew that if they shut it down that they could regain control of the situation. So the guys found their drone operator hiding out in that mill and stopping him allowed the others to stop Kurtz and his wife.

Therefore, Pride managed to solve a case and get the bad guys without having to go rogue, but the whole mission came at a cost because Percy’s friend Jake couldn’t be around the others knowing that he had almost betrayed his country for a mission.