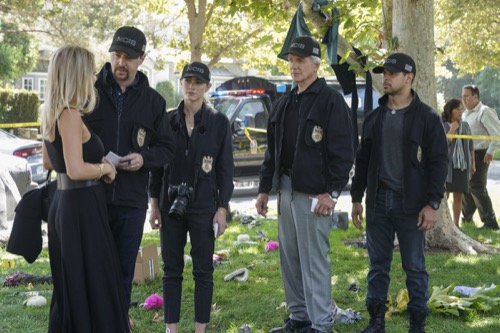 Tonight on CBS NCIS returns with an all-new Tuesday, October 9, 2018, season 16 episode 3 called, “Boom” and we have your weekly NCIS recap below. On tonight’s NCIS season 16 episode 3, as per the CBS synopsis, “One of the NCIS agents is starstruck after the team investigates an explosion outside the home of Navy Petty Officer First Class Todd Nicholas and his wife, popular reality TV star Sheba Nicholas. Also, Vance continues physical therapy for the injuries sustained when he was held hostage.”

A couple of thieves were going around and stealing packages when they came across one package that turned out to be an explosive on tonight’s all-new episode of “NCIS”.

The thieves had died almost instantly. Only the explosion had occurred outside of a Navy SEAL’s home and so it still warranted an investigation. The first thing that was investigated was why the explosion happened and the agents found out that thieves had taken a package from the Navy personnel’s home. The return address was the location of the Lincoln Memorial and so it was clear that whoever tried to kill Petty Officer Todd Nicholas had taken additional steps to be not found however the naval officer had believed he knew who tried to kill him. He told Gibbs that he thought it was his wife. His wife Sheba Nicholas was a reality star. She was on the Real Wives of War and was known by her fans of being completely devoted to her husband Todd.

McGee watches the show and he believed Sheba could never hurt Todd, but they questioned the husband and he said he wanted to divorce her. Sheba changed into a completely different person after she joined the show and Todd said that’s when he wanted out. He tried to ask for a divorce and she turned him down because she thought he would come after her real money. Then Todd thought he should convince her that he’s having an affair and that’s when she threatened to kill him. Sheba told him that she would cut off his genitals when he was asleep and watch him bleed out. Todd said that after that he hadn’t known what to do and so that’s why he thought she was trying to kill him.

Sheba, on the other hand, had thought it was laughable that anyone would think she was trying to kill her husband. She said she didn’t know how to build a bomb and that her husband was the one with all the training. He also knows that his wife likes to check mail and so Sheba said that he could have been trying to get rid of her. Either way, an explosive was mailed to their home and so the team looked outside the family. They investigated anyone that might have had a grudge against Todd or Sheba and they came across Leonard Finnick. Finnick was Sheba’s most obsessed fan. He talked all the time about how they could be together if Todd was out of the way and so the team suspected he might have tried to kill Todd just to live out his fantasy.

The team went to Finnick’s home and they found it decorated with images of Sheba. There was an even a cutout of Sheba that was laid out on the bed and so Finnick was creepy though he wasn’t around when the agents came in and so they looked for him. Finnick was all over the place and while they were going down their list they found help from an unlikely source. Sheba had come with boxes of mail and gifts that Finnick had sent her. She said she didn’t have much fans and that’s why she cherishes each one that she does have. Like the stalker that threatens her husband! The team had later gotten a tip to act and they found Finnick with a package. The package hadn’t been a bomb and so all it was just creepy. It was dreamscape of Finnick and Sheba with dolls.

There was also a doll for Todd and so Finnick was interviewed about that because his Todd doll was dead. The team had thought Finnick was so much their guy that they brought in Sloane to get an opinion on him and she had burst their bubble. She said that Finnick wasn’t a real danger to anyone much less Todd and that’s why Finnick lives out his dreams with his make-believe. Also, there was another bombing while Finnick had been in custody and the latest victim had nothing to do with Sheba or her reality show. The second victim was Patricia Everett and she was a divorced mother that nothing to do with the Nicholas family or the Navy. And so the team did as Gibbs suggested and looked into Todd’s classmates at the Navy SEAL.

The classmates had also taken a class to build a bomb and while they were at it the team had also been instructed to look into whoever washed out because they failed their psyche exam. There had just been one person that had done both – David West. He had failed at the academy because the psychologist who was named Pat Everett had thought he was too unstable and so that’s why he went after the mother. It had simply been one too many people with the same name. The team hadn’t wanted to test their luck with David a third time and so they went to his home to arrest him only he started shooting at them. He was raining fire from his house out in the woods and was trying to kill everyone that stood in the way of him finishing his “work”.

Except four agents were always going to get the drop on David. David was brought in and was refusing to answer questions though Director Vance decided to try his own hand at interrogating him because he read David’s files. He began talking to him about what happened at the Academy and he got David to admit that both Todd and the psychologist deserved to die. He also noticed that David was checking his watch and he figured that another bomb had been mailed. So Vance leaned on David until he got David to all but admit that he wanted his new wife to pay because she left him after only four months of marriage. And so they got in touch with Gwen Eisley before she decided to open her package and they got David thanks to this latest stunt.

Director Vance had felt proud for the part he played in David’s arrest and he had worked up the courage to ask out the woman he met in Physical Therapy however not long after that woman said “yes” she went on to meet a shady man that has been following Vance since Vance was rescued.