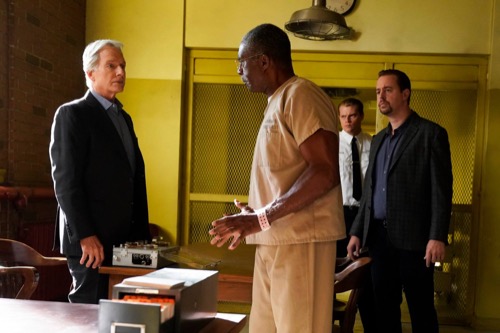 Tonight on CBS NCIS returns with an all-new Tuesday, October 23, 2018, season 16 episode 5 called, “Fragments” and we have your weekly NCIS recap below. On tonight’s NCIS season 16 episode 5, as per the CBS synopsis, “A 50-year-old tape recording left by a murder victim is found, and the NCIS team tries to exonerate Ray Jennings, the Marine serving a life sentence for the crime.”

An unsent letter shed some light on an old case on tonight’s an all-new episode of “NCIS”. The letter had apparently gotten trapped behind a sorting system at the post office, however, no one knew about it and it wasn’t found until forty-eight years later. The post office had gotten sold and the new owners were renovating it in order to turn into a vegan restaurant. It was the new owners that found this letter and they decided to deliver to its intended recipient. Her name was Claire Hall and the letter was actually the lost recording from her husband. He had died back during the Vietnam War and he chose to send recordings rather than letters back home. And so Claire had been happy to get this one final message from her husband until she played it and realized her husband killed himself.

First Lieutenant Daniel Hall had said he couldn’t go on with the war. He was tired of having to fight and so he apologized to Claire because he didn’t want her to go without answers, but all the recording did was confuse her because Claire had formerly believed that her husband was murdered. There had been an investigation at the time and NCIS had even found this alleged culprit. They arrested Daniel’s friend Ray Jennings because everyone thought he turned on his Commanding Officer which hadn’t been all that unusual back then. It also didn’t help when Ray confessed to the crime. He pleaded guilty at his trial and so Claire had thought she had all the answers until she got the last recording.

Claire now believes that Ray was innocent and she took the recording to NCIS to clear his name. She got lucky when Gibbs had been the one to speak because he had heard her out and had asked for all the tapes. He wanted to piece together what happened to Daniel Hall and he was willing to believe that the original NCIS was flawed. And that led him to question why Ray confessed. Gibbs had gotten his team to look into the investigation and he personally went to talk to Ray. Ray it seems had made his peace in prison and he reiterated to Gibbs that he had killed Hall. He said he was guilty and that was it. Some on the team didn’t think they should keep looking if Ray was still confessing to his one crime and Gibbs chose to ignore her.

Gibbs wanted Claire to have answers and so he continued to look into this old crime. He had asked his people what they found and it hadn’t been much because the initial case files had been moved. It took Torres a while to find them and unfortunately there was black mold on them. The most McGee could get was the witness testimony and the fact Ray changed his story. Ray first said he threw the grenade into Hall’s hutch from a distance and then later he changed it by saying he was inside the hutch when he lit the grenade before running away. The team talked to the witness and it turns out he saw Ray running away from the hutch. He didn’t see Ray throw the grenade and so he’s not sure who caused the explosion.

The team went back to Ray. Ray had become so institutionalized that he was comfortable being in prison and had carved out a place for himself. He’s been his commissary money since his arrest to start a library at the prison and now that library full of books in pristine condition. Ray was content with his life and he didn’t want to reopen the case. He was happy to ignore Gibbs as long as he wants too just because Gibbs challenged his story and so Gibbs pushed him. He played the recording with Hall’s voice and in it he was laughing with Ray over something trivial. It had moved Ray so much that he finally confessed to what happened that night. He had apparently blacked out. He had down a bottle of whiskey and didn’t know what happened the night Hall.

Its why he changed his story to match the witness’s testimony. He had blacked out a lot back then and he was still functional because after one blackout he found out that he had killed ten Vietnamese fighters.

All Ray knew was that he had been angry with his CO before he got drunk. He didn’t know what really happened. The team also wouldn’t know the truth until they exhumed Hall’s body. They brought him up to the lab and they couldn’t find anything thing that would significantly state whether he had been killed or committed suicide. What they did find was the plating on the recorder. He had been hugging it to his body when he died and in his last recording, he said that he would be holding his wife close to his chest at the end. The team believed that was proof enough he knew he was going to die and so they still had a few questions. Bishop knew that Ray didn’t have family and so she wanted to know who was putting money in his commissary.

The money had seemingly come from Thomas Fletcher. Fletcher was the witness that said he saw Ray running from the hutch and so they brought him. If he thought Ray was guilty then why has he been supporting Ray for the last forty years? The answer was because he felt guilty. He lied about seeing Ray running from the hutch. He had seen Ray passed out moments before he saw Hall and Hall had been in his hutch alone when the explosion occurred. Fletcher had just lied because he wanted Ray to get sent home. He hadn’t wanted to be around a black marine and for that, he decided to blame Ray for Hall’s murder. And even Ray had believed his lie.

It was too late to charge Fletcher for lying, but the team was able to get Ray out of prison and he was there when they reburied Daniel Hall.