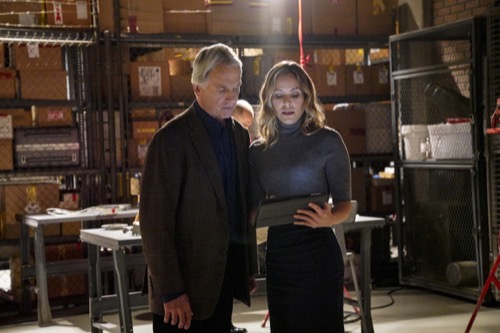 Tonight on CBS NCIS returns with an all-new Tuesday, November 13, 2018, season 16 episode 7 called, “A Thousand Words” and we have your weekly NCIS recap below. On tonight’s NCIS season 16 episode 7, “A Thousand Words,” as per the CBS synopsis, “A mural by a street artist and activist is stolen, and the NCIS investigation leads to a conspiracy regarding a Navy contractor and the safety of ocean mammals. Also, Bishop shares a special connection with the street artist.”

The team was called after the National Armed Forces Credit Union reported a robbery on tonight’s all-new episode of “NCIS”.

The thieves took a chunk out of the wall at the bank. Other than that there didn’t appear to be any damage to the rest of the building and nothing had been stolen. The tellers checked their numbers several times and not a cent had been stolen however the former security guard had still been around despite getting fired and he tried to claim he foiled the robbery. Zach said his presence alone must have scared of the robbers and everyone took a good look at him. They all saw a skinny guy who wasn’t paying attention when a piece of a wall was stolen and so no wonder he got fired from the bank.

Nevertheless, the team had been left with a mystery. They realized that if the thieves didn’t go after the money then it must have been something else they were after. Like that piece of wall. It didn’t make sense at first why anyone would steal a piece of the wall until they learned that someone went to great lengths to take it. There had been nothing important on it from the other side of the bank and so they investigated what could have been on the outside. The team turned to Kasie and she found evidence that there had been painting on the wall. Or as Kasie called it was “street art”. She found samples of an expensive paint and that indicated the artist went to great lengths.

Kasie decided to look into any street art that was recently put for sale and she found something. She found an auction for a street art that had been taken out of a wall and it was going for at least a hundred grand. Kasie told Gibbs about where he could find the painting before it was sold and so he sent both Torres and Bishop. They pretended to be hipsters and eventually found the painting they were after. It was a picture of whales and it had been done by Ritz. Ritz was a famous artist who put the code into his painting to alert people about the dangers going on in the environment. The pictures he created of the dolphins led to a website about donating to save the mammals.

It had been cool because neither Torres nor Bishop had ever seen anything like it although that didn’t stop them from taking the painting into custody. It was evidence of a crime and the crime actually extended above and beyond the stolen wall. It seems their artist had not only put the bank in jeopardy with his stunt and that he created the painting in retaliation for what the US Fish and Wild Life Services did. The federal government had given a lot of money into saving endangered animals and some of that money didn’t always go where it was supposed to. It actually went to funding big game hunting and, well, Ritz put the news on blast.

Ritz created a painting on the side of the building for US Fish and Wild Life Services that told everyone about how giraffes on a federal level because of corruption. He also put in a code in the painting that detailed emails he stole from the government and so he wanted for releasing classified information. Gibbs learned all of this after the fact and so he ordered his team to lean on the art auctioneer until they got a name. It took some persuading, only they got what they wanted and learned that Ritz’s real name was Jared Clark. He had an expensive loft and after the team went there to arrest him – they found him dead.

Ritz had been murdered and whoever did it had spray painted him to make him look like another piece of art. The team figured it might have been personal and what they later found corroborated their theory. They eventually learned that all the places Ritz was telling people to donate towards were fakes. There was never any charity that Ritz was helping and instead it looks like he was just as corrupt as the people he stood against. He was a fake and any one of his adoring fans could have turned on him if they learned the truth. Kasie did some digging and she found one person that had followed everything Ritz did until one day she sent a lot of hate to him via social media.

The suspect was Melanie Keller. The team went to her home and she had tried to make a run for it by driving off in her car. Only that stops being effective when a certain someone stands in the way and so the team arrested Melanie. They showed her all the messages she sent to Ritz and asked why she hated the artist. She said she didn’t hate Ritz because she was Ritz. Melanie created a painting just for Gibbs and Bishop to prove she was the real artist. She said she found out Jared Clark had been pretending to be her and that she was the one that was changing her code to steal from her fans. So she sent messages to him to back off.

The team asked Melanie if she killed Jared Clark and she swore she didn’t. She instead believes it was one of the companies she was fighting against. Melanie led them to a company called Trebel. Trebel claimed it was cleaning up the ocean and what it was really doing was polluting it. Melanie found evidence of this and she was going to expose them. She believed that Trebel could have gone after Jared Clark believing he was Ritz and so she thought the team should go after this company. This company seemed to be the big bad wolf and the team checked into it. They checked the sonar machine that Trebel was using and they found it was rigged.

The machine was rigged to pass the naval exam they had to go through and after that, they raised the frequency, which was what repelled and even killed whales as well as other sea life. The real Ritz had been right all along and that meant her life was in danger because someone at the company was willing to kill Ritz to keep the secret. The team decided to let Ritz go while they further investigated the company and so Gibbs went to head to head with a CEO. He wanted to know if she knew about the faulty sonar and if she or someone else involved had looked into murdering Ritz to keep the secret. And what he learned was that the company had been in talks with Jared Clark.

It seems while Clark was still pretending to be Ritz, he and Trebel talked about what was happening to the sea life and they were apparently going to reach an agreement. So Trebel didn’t actually have a motive. They thought they were dealing with Ritz and everything was above board. The only one that claimed that Trebel was the problem was Melanie/Ritz. She also left the building before anyone could stop her and so the team believed they had been right the first time to suspect Melanie. She left as she did showed that she was hiding something and Bishop thought she might find out the truth.

Bishop knew Ritz liked to hide things in her paintings and so she checked the latest one – the one that she created in their building to prove that she was in fact, Ritz. So Bishop checked the painting and she found a license plate number. It belonged to Brady Spencer who was a senator that died not long after he found guilty of taking bribes and so they checked who might have his car nowadays. They found a former staff member of the late senator and it turns out he now works as a telemarketer. He took quite a fall from grace when the senator lost everything and he blamed it on Ritz who exposed them.

The team later arrested their guy, but they still wanted to know why Ritz led them on a goose chase. Ritz had bonded with Bishop and so Bishop waited for Ritz to reach out. When she did, she said that Jared Clark thought she was following him and had sent her the license plate number as proof. Only she knew that wasn’t her car and so she withheld that from NCIS because she wanted them to look into Trebel. It was more important to her that they stop the sonar that was killing animals than it was for them to find Jared Clark’s actual killer.