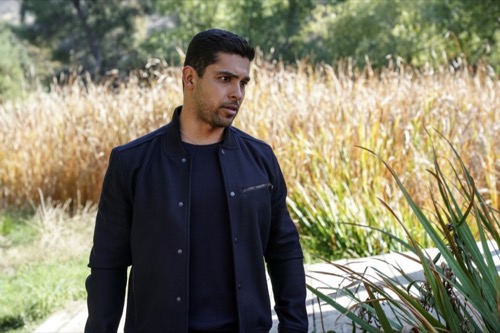 Tonight on CBS NCIS returns with an all-new Tuesday, November 20, 2018, season 16 episode 8 called, “Friendly Fire” and we have your weekly NCIS recap below. On tonight’s NCIS season 16 episode 8, “Friendly Fire,” as per the CBS synopsis, “McGee and Bishop travel to Afghanistan after a murder case in the states is linked to a string of soldiers killed by friendly fire overseas. Also, Kasie leaves the lab and accompanies Torres into the field to process additional forensic evidence.”

A couple of volunteers found a dead sailor floating in the waterways on tonight’s all-new episode of “NCIS”.

The body had been too foregone to get any fingerprints. The victim had to be identified by his uniform at the time of death and the team counted themselves luckily when they traced it back to Senior Chief Richard Granger. Granger worked at the Defense Logistics Agency. He would have been reported missing if he ever so much went a day without calling in, however, there was no missing persons report next to his name and the victim they had was dead for at least a week. It didn’t match up and someone called the DLA to ask about Granger and they had been surprised to learn that they were actually talking to Granger. The real Granger was just as confused as NCIS as to why someone would impersonate him and he claimed to have never seen the victim before.

The team asked him how their guy could have gotten his hands on Granger’s gear and he told them that his apartment had been burglarized a few weeks back. He said that they took a few of his things and that he hadn’t thought it was a big deal, but learning that someone died while wearing his uniform had made him concerned for his own life. Granger wanted to know if he was safe and the team had no reason to believe he was in danger. They think their killer must have known their victim and so they worked on identifying the body they had in custody. They ran a facial recognition on him and it revealed that the victim’s real name was Wesley Moore. He was a freelance engineer and had a brief stint with the Marines before he flunked out during training.

The team investigated Moore and they learned that he used Granger’s badge to access some files on the military database. They didn’t want he was going to do with them though they did know he was in frequent contact with Captain Alicia Voit of the Marines and that she died around the same time she did. She had been killed overseas by enemy fire and her body was being flown back in the next couple of hours. Voit’s remains would be in town for a few hours before she was moved to her final resting place and so the team knew they had to stop that transportation. It went against Gibbs’s code to stand in the way of a Marine’s burial and he only did it because he believed Voit’s murder could be connected to Moore’s.

Moore had accessed the files of several dead marines that died overseas and he had no reason to do it for himself. The team believed he did it for Voit because Voit suspected something. She asked Moore to get those files because she didn’t think she could go through proper channels and so the team needed to know what she was looking for as well as why she may have been killed for it. The team took ownership over her remains when she touched down in the states and they took back to Palmer because they wanted his verification that it was an enemy fire that killed her. Voit was hiding something from the people she worked with and the team were afraid it was because she couldn’t trust anyone in the Marines

The team had Palmer take a look at Voit’s remains, but they weren’t idle while they waited for results. They thought the best way to get answers was to send some of them to Afghanistan and so Gibbs decided to send McGee and Bishop. They needed to be on the ground as they retraced Voit’s final moments and not long after landing they were given a golden opportunity. They were told the terrorist that allegedly killed Voit was about to captured and that he would be transferred to the base. The team had a chance to question him about the events of that day and they were waiting for it when they heard back from Palmer and Ducky. The guys could perform an autopsy on Voit because her body had already been processed and so they reviewed the official record of her autopsy.

Voit had taken two gunshots to the chest when she killed four insurgents and was brought low by taking the fatal gunshot to the head. She died a hero yet her escort was getting antsy about getting her to New Jersey. He said that the team’s questions had been answered already and so he didn’t know why they were holding onto Voit. Only Gibbs had gotten special permission to hold onto Voit and that made the escort back down. He had been in a rush to get Voit’s remains out of there and so Gibbs suspected there was a story there. Gibbs wanted to know why the colonel that was escorting Voit was taken the issue so personally and therefore he looked into it. And he found out the escort had volunteered.

The Colonel had been the one to sing up Voit. She needed something to believe and the Colonel had given her that, so that’s why the Colonel was taking her death heard. He blamed himself for what happened to her and that meant he wasn’t connected to what actually killed Voit. Her killer had been captured and the team had been able to speak to him. The terrorist claimed to have information. He said that he had been working with an American and that’s how he knew where Voit’s convo would be though he wanted a deal before he said anything else and that’s something the Americans were never going to agrees to. They don’t make deals with terrorist and so they chose instead to threaten him.

Azar Atwa was told he would be sent to Guantanamo and that all his new friends would know that he sold them out if he didn’t tell NCIS what they wanted to know. They guaranteed him protective custody and so he was going to name the American traitor, but a sniper got to him first. Atwa had been murdered on base and his killer had taken a shot at him from the mountains. There was no way to track him down and so the agents chose to look for the mole that mentioned Atwa had been taken into custody. The team in Afghanistan were looking for their spy while the team back in the states found out who attacked Moore. Moore was killed by Xavier Blackburn who had been let go from a private military contractor because of his temper issues.

It turns out Blackburn had been promised his job back if he took care of Moore and he thought Moor was the traitor.

Blackburn had been lied to by the second-in-command to the General in Afghanistan. When they arrested him, he said that he assisted the Taliban because there was no point to the war and that soon the Taliban would recapture everything the Americans fought for.

So it seems to be a waste that this was Ducky’s last case. He wanted to retire and believed Palmer could fully run the department without him.