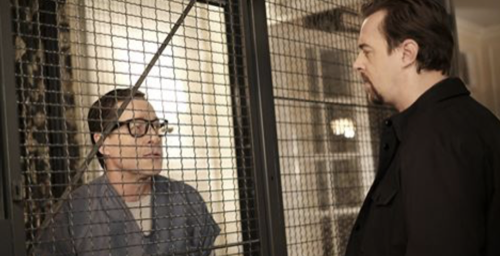 Tonight on CBS NCIS returns with an all-new Tuesday, February 27, 2018, season 15 episode 15 called, “Keep Your Enemies Closer” and we have your weekly NCIS recap below. On tonight’s NCIS season 15 episode 13, as per the CBS synopsis, “NCIS strikes a deal with convicted murderer Paul Triff, giving him a 48-hour furlough at his former residence, now McGee’s home, in exchange for information that can convict his former cellmate, Gabriel Hicks, the murderer who deceived Gibbs and Fornell.”

NCIS had opened an investigation into Jessica Shaeffer on tonight’s all-new episode of “NCIS” however Sloane known who was responsible for her friend’s death.

Sloane had been looking into Gabriel Hicks. He was the naval officer that had gotten convicted of the murder of Lt. O’Connell and who also had gotten his conviction vacated when Sloane along with Gibbs seemingly proved that he was innocent, but the two later doubted their theory on Hicks’s innocence after he was released from prison and showed off for them at the batting cages. He had shown them that he hadn’t mattered whether his left or right arm was dominant because he could use both. They were interchangeable for him and that meant he could have killed Lt. O’Connell only the two knew he did it because of the way he showed off. Hicks had wanted NCIS to know that they had him and they let him go.

Hicks got a thrill out of one-upping his opponent and so that’s why let Sloane and Gibbs see him as the sociopath that he was, however, Sloane couldn’t stay still when it came near her friend Jessica. Jessica had been acting as Hicks’s lawyer and Sloane was worried about her. She went to Jessica to warn her about Hicks and how unstable he was and Jessica had ignored her. She thought Sloane was after some form of petty revenge because Hicks got out and so she didn’t start to question who she was defending until much later on when she developed questions. Jessica had looked into Hicks’s background and she found out that he had shared a cell with Paul Triff. Triff had his own history with NCIS and so they hadn’t wanted to reopen that door.

Triff was the same man that had killed several people in McGee’s apartment and was himself a sociopath yet Jessica had gone to see Triff right before she died and so Sloane had wanted to know what they talked about. She and McGee went to visit Triff in prison and they tried to talk to him about Jessica. Jessica had been murdered because she found out something about Hicks and so the two were hoping Triff could help with that while Triff, on the other hand, was hoping they could give himself in return. He wasn’t going to talk to them without any kind of wining and dining on their part and so McGee decided to call his bluff. He turned to Sloane and said that Triff didn’t know anything so they might as well leave and that pushed Triff into giving them a hint.

Triff told them that Hicks was a talker. He told Triff all about how he killed O’Connell and even told him about the others so the NCIS agents had been a little doubtful. They just couldn’t believe that Triff knew as much as he was claiming because Hicks couldn’t have been that stupid and so Triff said Jessica had doubted him too until he gave her proof. He said that told Jessica about a witness that Hicks kept talking about in prison and how Hicks talked about killing this woman, but there had only been one witness the team knew about and it had been an elderly woman named Mary. Mary had been a witness in Lt. O’Connell’s murder and so NCIS didn’t understand why Hicks would go after her seeing as he couldn’t be tried twice for the same crime. And that had gotten Triff to laugh.

Triff said Hicks didn’t need a reason to kill Mary and so the team raced to Mary’s side to protect her though by then they had been too late. She had gone missing when her nurse had left the room for a few minutes and witnesses stated they saw her get forced into a vehicle. But the team didn’t know where Hicks would have taken her and their resident expert on Hicks had wanted something before he would help any further. He wanted a forty-eight-hour furlough while he helped them work the case and he had also demanded that he stay at his last known residence meaning he wanted to go back to McGee’s apartment. McGee hadn’t liked the idea and he hadn’t wanted to babysit a serial killer yet he did his job and had also gotten rid of any evidence of his family at the apartment.

McGee’s wife and kids went to go stay at her mother’s and he had his team clean the whole place of any trace of him, but Triff did at least come through. He told them that Hicks left behind evidence of his crime in the van. The same van that NCIS still had in their custody and the one they swore they combed through until again Triff laughed. He laughed at NCIS because they were still thinking like cops when they should have been thinking like Hicks and so the team did as Triff suggested. They went back to the van and they checked inside of the vehicle where they eventually the murder weapon. The weapon that Hicks had used on all of his victims and not just Lt. O’Connell – a pipe that had his victims’ blood all over it and just his fingerprints.

That was enough to try Hicks for the other murders and get him sent away for life however they then had one problem. They couldn’t find Hicks. Hicks had gotten rid of the bug they tried to plant on him and he had returned Mary without any problems. He hadn’t tortured or hit her and had allowed her to use his phone to call for help when he released her, therefore, no one knew what he was going to do next. They couldn’t figure out why he hadn’t killed Mary when he had the chance because he didn’t seem like someone that suddenly grew a conscience and so they went back to their expert. They asked Triff where Hicks might be heading and Triff had had nothing for them. He instead had wanted to talk to McGee like old friends.

Triff had wanted to talk about their fathers. His own father was an absentee parent and he sensed McGee’s father was the same though he assured McGee that he had nothing to worry about his own parenting style. He had figured out that McGee had had kids and he told them that all he could do was love them. Triff’s own parents hadn’t been into bonding and he said that hadn’t hurt him. So Triff had been cracking jokes back at McGee’s apartment and it was only afterward that they realized he had been giving them clues. He had wanted to talk about fathers because that was part of Hicks’s motivation. Hicks went after strong men in authority and he killed them as a way to reassert his control after losing it to his own father.

It had taken some time for Sloane to realize that and that helped her figure out where he was going. He wasn’t going on the run because he felt compelled to go after Fornell. Fornell had gotten kidnapped from his home and NCIS was out looking for him when Hicks decided to go to Triff’s apartment. Triff figured Hicks would go there to find him and so he had planned on luring Hicks into a trap except McGee hadn’t been fast enough to trigger to stop Hicks from shooting at him and so Triff took a bullet for McGee. McGee was like family to him and he appreciated the care that McGee showed his apartment. So the two were apricating each other when Hicks got away and finally tried to make his escape.

Hicks got into the car and was going to make a run for it, but somehow Fornell had gotten out of his truck and had snuck in through the back seat to take on Hicks. The serial killer had been busy driving that he didn’t see Fornell until Fornell had his hands around his neck and so that led to a nasty accident. Hicks had crashed the car and had gotten out to fight Fornell when Gibbs snuck behind him – only to taser him. They had wanted to bring in Hicks alive and they did just that on tonight’s all-new episode.