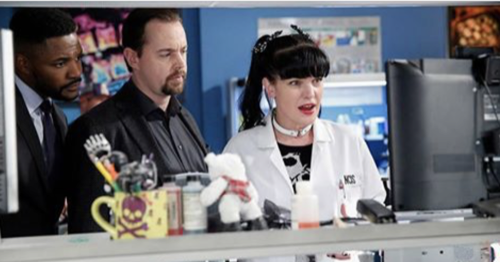 Tonight on CBS NCIS returns with an all-new Tuesday, February 6, 2018, season 15 episode 14 called, “Keep Your Friends Close”” and we have your weekly NCIS recap below. On tonight’s NCIS season 15 episode 14, as per the CBS synopsis, “After the body of a missing Navy commander is found, Vance orders Gibbs and the team to work with former FBI Agent Tobias “T.C.” Fornell, the private investigator who was hired to locate him. Also, Bishop and Torres interview convicted investment advisor Albert Hathaway when the victim is linked to his highly publicized trial.”

McGee has been on a roll since his two children were born. It was like he had sudden change overnight and became more than the McGee they all knew as well loved. He was now Superdad. McGee has been able to close cases all on his own and he had even started to notice the little things that could have easily turn into something else if he hadn’t spoken up. So whatever got into him, it appeared to be doing wonders for both his home life and his work at NCIS, however, McGee’s new powers were put to the test on tonight’s all-new episode of “NCIS” when their case proved to be full of twists and turns.

The team had gotten a call when a couple of local police officers pulled over someone driving a stolen car and had found the body of Navy Commander James Willis. Willis had been found in a barrel and the small amount of lye in the barrel had dissolved both of his feet, but there wasn’t enough lye to dissolve the rest of the body and so that had stumped Palmer. Palmer had later told Gibbs that it just hadn’t made sense to take countermeasures and not use them to their full advantages. He believed the culprit they’re looking for had cared about using the lye because they wanted the commander to eventually be found which would make sense.

The culprit had also taken a very large risk when they used a stolen car to carry around the body and the fact that the car had been found in an empty parking lot when it was stolen by another person had shown that the culprit didn’t care if the commander was found intact. There was little to no forensic evidence found at the scene and the car had been stolen by one too many to be of actual use. Meaning there wasn’t much that NCIS could take from the scene or the body to find the person responsible though Abby had had an explanation for why the scene had been too clean. She told the others that they were looking for hitmen.

Abby explained Willis had been killed by a pro and so she helped them look into anyone that had access to lye or who might have stolen some to use on the victim yet that wasn’t the only avenue the team was using. They had also found out that a Private Investigator had gone to Willis’s home and was asking about him. Willis had been missing by then and therefore his widow hadn’t been able to offer the PI much because she had also been looking for her husband by that point. So the PI left her his business card and the team used it to track down the PI because they had questions of their own that they wanted to ask.

The team wanted to know who this the P.I. was and it turns out it was their old friend Tobias Fornell. Fornell had gotten let go from the FBI when they found out he withheld crucial evidence in Hick’s case and so he became a Private Investigator afterward. He said it allowed him to still use his skill set and he seemed happy with his new career. Fornell told Gibbs that he wasn’t upset with him and that he was in a great place now, but what Fornell couldn’t understand was why Gibbs had been avoiding him before and why he was continuing to do so even as Fornell was brought onboard to help with Willis’s case.

Fornell had been looking for Willis because he had been hired by Cash-Line Direct. The money-lending company had signed off on several loans to Willis and Willis started to ignore them by the time some of those payments came due. He didn’t answer any of their calls or respond to the many letters in the mail and so the team eventually learned that he had been in debt with quite a few people. He had also borrowed money from a friend that to pay off some his sick mother’s medical bills and he recently paid off the thousands of dollars he had owed his friend. And so while he had been in debt, Willis was trying to pay off everyone.

Plus, dead men can’t pay off bills and so none of the people he owed would have a motive in killing him, however, there was one other motive that no one had seen until they found out about the hitman. The hitman had paid off two idiots to get rid of the body and so they had happily given him up. They revealed that the hitman was going to kill someone else and it turned out that someone else was a woman that Willis had been having an affair with. The two met when they were serving on the same jury and were sequestered for months. So Willis finally got up the courage to tell his wife that he was leaving her and that she wasn’t going to get anything.

Willis had used up all of their savings and so there was nothing his wife could take though she realized that if she killed him as well as his mistress that she would get money from his life insurance policy and that mistress wouldn’t be able to point her out as a suspect. Therefore, it had been a good plan until the hitman she hired had turned around to outsource the body’s disposal. That’s what led to both the hitman and Willis’s wife being identified and now they were both looking at life sentences. And while Fornell eventually learned that he had been right about Hicks, he decided to forgive Gibbs for trying to hide it from him and was going to work the case with them.

Sloane for her part had warned his lawyer friend about Hicks and so Jessica gave up on being his counsel because she found something. She couldn’t tell Sloane what she found because it was protected by attorney-client privilege and so she just told Sloane to keep digging because there was something to be found. But before Sloane could get anything else out of her friend, Jessica’s car blew up and Sloane along with everyone else knew who was responsible. It could only have been Hicks!