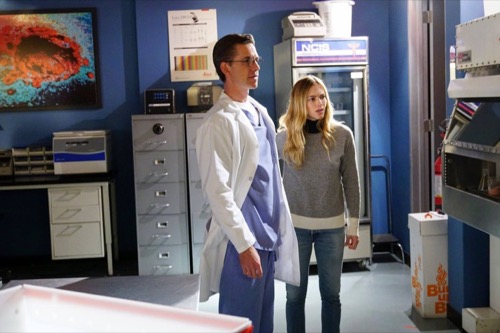 Tonight on CBS NCIS returns with an all-new Tuesday, March 27, 2018, season 15 episode 18 called, “Death From Above” and we have your weekly NCIS recap below. On tonight’s NCIS season 15 episode 18, as per the CBS synopsis, “The NCIS headquarters are evacuated after the team discovers a body and some bomb materials on the roof of the squad room.”

Gibbs and the team are sitting at their desks talking when a body lands on their roof. After getting over the shock, Gibbs and the others head to the roof. He is an AC repairman. Torres calls them over to the other side of the roof. He has a chair with an umbrella set up. It is a secret break room and Torres wants to know who set it all up.

In the office, McGee reports to Gibbs. The company the man supposedly worked for is fake and doesn’t exist and neither does the identity of the man.

Eleanor comes to see Abby whose give her the latest. The man is an intruder who was carrying a pipe bomb in his toolbox. He accidentally set it off and killed himself.

Leon wants everyone out. He and his team will stay behind and look around. Gibbs refuses to leave. Leon gives him 30 minutes.

Eleanor is talking to Jimmy in the lab when the dead guy’s identification comes back and he has a record.

Gibbs and Torres take a look around. They discover that the dead guy isn’t alone. Meanwhile, Eleanor and Jimmy are still in the lab when the door shuts and locks. The lights go out. McGee and Leon also experience a failure with the system. The lights go out. Leon tells everyone they need to get out. They too are locked in. In the lab, Abby comes face to face with the other intruder. He has a gun.

McGee points out to Leon that whoever hit the power and shut the system is inside. Cell phone frequency has also been shut down. Outside, Reeves wants in but no-one will let him.

Torres and Gibbs sneak around in the dark. They see an intruder with a gun. Torres heads back to his desk to get his gun.

Torres dances through the dark office dressed like the cleaning man. Torres continues to play with them until the intruder holding Abby comes to see them both and looks at Torres’ desk. He isn’t a cleaning man.

McGee taps into the system. The intruders must be talking to one another. He locates the source. It’s an intruder in the room with him, Leon and Sloane. Sloane is quick to take the female intruder down.

Reeves wants to bust in there asap, but the authorities outside won’t let him. The lead intruder Burke reveals that he is there to destroy evidence. Torres notices his military tattoos and tells him to suck it. He tells him he is no longer loyal.

Burke lights the evidence on fire. Meanwhile, Gibbs pulls a fast one on the less intelligent intruder. He hits him with a bat and knocks him out. He radios to the outside and is just about to grab his gun when Burke comes out of nowhere. He aims his gun at Gibbs.

Sloane, Leon, and McGee try to break down their intruder who has been working for NCIS. Sloane asks her why she is doing this. Leslie tells them they offered her $75k. She didn’t know all of this was going to happen. Meanwhile, Eleanor tries to make her own explosive to break the window and free her and Jimmy.

Burke follows Gibbs who is supposed to show him how to get out. Meanwhile, Torres and DiNozzo try to break free from their cuffs while the fire still burns from Burke.

Sloan and the team finally get the computer system up and running. They get free. On the roof, Gibbs struggles with Burke. Gibbs runs while Burke tries to shoot him. They come to a stop. Leon shoots up through the ceiling, taking out Burke who falls through and onto a desk to his death.

DiNozzo finds Abby. She was sleeping in the morgue. They think she is dead. She wakes with a smile. Meanwhile, Eleanor’s bomb goes off. She and Jimmy break free. The explosion makes Leon run to them.

The next day, Torres cannot believe Leslie was part of it all. She was always so nice to him. DiNozzo is taking them all out for drinks tonight. While they talk, Gibbs kicks back on the roof in his chair.