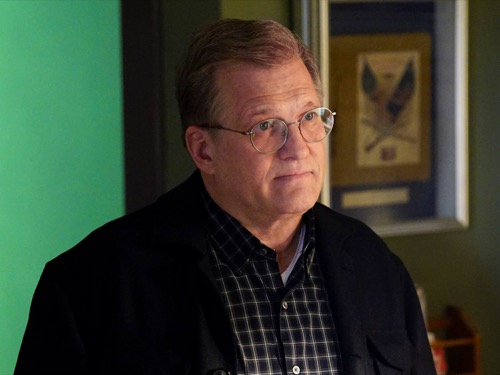 Tonight on CBS NCIS returns with an all-new Tuesday, March 6, 2018, season 15 episode 16 called, “Handle With Care” and we have your weekly NCIS recap below. On tonight’s NCIS season 15 episode 13, as per the CBS synopsis, “Gibbs and the team work to clear the name of retired Marine Sergeant John Ross when cyanide is found in one of the hundreds of care packages he sends to active-duty Marines.”

The body of Petty Officer James Sweeney was returned to the states on tonight’s all-new episode of “NCIS” after he died of a heart failure, but that hadn’t made sense to anyone.

The sailor was twenty-three, had remained active during his deployment, and most importantly he had been medically cleared in the weeks leading to his deployment. So why would someone that was deemed healthy suddenly drop dead from heart failure? There was usually a build-up to such cases and his doctor wouldn’t have deemed him fit for deployment if he noticed his heart was under any stress, however, Palmer had double-checked the findings and what he found showed that Sweeney truly did die from heart failure and so he left the rest like the way to Abby. Abby had run the tox screen and she had found traces of a medication that could induce heart failure.

Therefore, someone had wanted Sweeney dead and Abby’s best bet was Retired Marine Sgt. John Ross. Ross ran a charity that provided care packages to sailors overseas and each package has a picture of the soldier that personally wrapped it. And Sweeny’s package had had a picture of Ross, himself. He did put together packages for the troops and his mother took a medication that was found in Sweeny’s system yet Gibbs had had some misgivings about bringing Ross in. He had seen the background information on Ross and had known that Ross was a prisoner of war for over five years when their embassy was attacked in Iran.

Ross was not the type of man that would have liked being imprisoned again and so Gibbs had had Sloane look in on the interrogation though it wasn’t much of an interrogation. Gibbs had tried to push Ross about his care packages and had asked him why he would position an active soldier. Except Ross claimed he was innocent and continued to demand to he’d be released. He couldn’t stand to be in a room with the doors closed and so eventually he was released just not before Sloane made her assessment. She could see that Ross wasn’t ok and she knew that he wasn’t treated when he came home like he would have been treated nowadays. And so she was concerned.

Sloane thought Ross was ok and she wanted to check up on him, but she couldn’t tell one way or another if he had anything to do with Sweeney’s death and so the other agents began asking questions. They went to Sweeney’s home on the day of his wake and they talked to his wife Emma. Emma had been her husband’s high school sweetheart and she said he had always known that he was going to go into the navy. He would talk about that and even getting married because he knew how he wanted his life to go. And as Emma was talking to the agents, there was a commotion in a different part of the house because Sweeney’s drunk uncle had decided to make a scene.

Uncle Bob, who could not remain standing for long, had gone on and on about how Emma was glad his nephew was dead. He said she had never even paid attention to Sweeney until his parents died when they were kids and she found out he had inherited a lot of money. That part was true just Sweeney hadn’t inherited the money alone. He had had to share his inheritance with his brother Clyde and it was Clyde that asked Bob to leave. He told his uncle that he was making a scene because Emma had nothing to do with his brother’s death and that it would best if he left. So the agents asked Clyde about his dear uncle.

The uncle had said a lot of things and they had needed confirmation, so Clyde told them that his uncle was only bitter that he hadn’t inherited anything. He believed Bob wouldn’t have gotten in their faces as much if it hadn’t been for the money and so the agents had forgotten the whole thing because the others had found out something about Ross. Ross usually took the packages he has to the mail office himself and the package that had been sent to Sweeney hadn’t been sent from their office. The lady that works there says she handles all of Ross’s packages because he likes to wait until she was free to come forward and so she told the agents about how odd it was.

The postal worker had also double-checked what the computer said and she told them that the package had been dropped off at a blue box however the agents had checked the box’s address and he hadn’t cleared Ross. They realized that it was near Ross’s house meaning that he could have easily have dropped it off while in a rush and so they checked the date on the packages. The date he supposedly dropped off the package had been the same time he was in Chicago at a Marines reunion. Therefore, Ross couldn’t have sent the poisoned package to Sweeney and someone had gone to additional lengths to frame.

The only person they could have thought of was the shock jock. There had been a shock jock that had invited Ross to his station under false pretenses and who had then accused Ross of being a government thug who only pretended to be charitable. That had upset Ross and Ross had even angrier when White Dexter claimed he faked being imprisoned yet Dexter hadn’t liked Ross storming off because he asked he told his followers that he would prove that Ross couldn’t be trusted. And so the team brought in Dexter. Dexter was rude, loud, and obnoxious except he wasn’t a killer. He just said things and made up things to bring the followers back.

Then later when someone floated the rumor online about how Ross had poisoned someone, they went back to Dexter and again he was cleared. He hadn’t started the rumor and so NCIS checked who did. It turns out it came from the Legion Hall where Ross works and it hadn’t been Ross. It had been a volunteer there named Clyde and he had been with his girlfriend Emma. The brother and the wife of the victim have been sleeping together while he was deployed and they were the ones that crafted the plan to kill Sweeney. They did it because Emma wanted out of the marriage and Clyde had wanted to impress his idol Whit Dexter. And so it had nothing to do with the money.

They were just horrible people and unknowingly talking someone into murder had backfired on Dexter. He began losing sponsors and it wasn’t going to be long before he lost his show. Though Sloane later conversations with Ross had helped them get through their experiences as prisoners of war. He had allowed her to open up to someone and she had done the same for him. He had also gotten the chance to tell her that he had a daughter that he didn’t know about him because her mother had gotten married when he became a prisoner and so Sloane talked him into finally telling his daughter who he was.

She just happened to be the mail lady he always talked to when he was dropping off his packages.