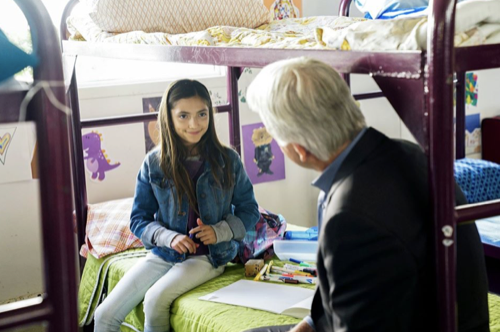 Tonight on CBS NCIS returns with an all-new Tuesday, April 3, 2018, season 15 episode 19 called, “The Numerical Limit” and we have your weekly NCIS recap below. On tonight’s NCIS season 15 episode 19, as per the CBS synopsis, “Gibbs is granted protective custody of a 10-year-old orphaned refugee when an NCIS case reveals she is the target of a violent gang.”

The team was called down to a records store on tonight’s all new episode of “NCIS” where they came across a victim that wasn’t exactly one of theirs.

The team tended to get called to a scene when a member of the armed services was either injured or murdered, but there was something off about their latest victim because Lance Corporal Oliver Harris wasn’t who he said he was. He had a military ID that could grant him access to any military base in the world and strangely the military had no record of him. If he was who he said he was then there would have been a record and so the team knew their guy’s ID was a fake. They had looked into it and they found several blank ID cards at the store. The store owner who also happened to be a second victim had seemingly been using his store to help a gang create fake military IDs and the team knew they had to figure out this gang’s purpose.

The gang as it turns out was La Vida Mala. They started out as a local crew that slowly grew to ten thousand members over fifteen states and they were dangerous. The gang usually took on assassination jobs and so everyone believed the gang could be targeting someone in the military which was why they needed fake IDs however they needed Abby to help trace the fakes that might already be out there and so Bishop had had to make that request even when she didn’t want to. She was sort of avoiding Abby because she had blown up Abby’s lab and so she was afraid of what Abby might do if she ever found out what Abby did and unfortunately no one wanted to help her. The others refused to lie to Abby and even Jimmy had questioned helping Bishop.

They were all going to leave Bishop to fend for herself and so Bishop did her best to not give anything away. She later talked to Abby about the fake IDs they were investigating and Abby had found something. Abby found a sergeant that wasn’t really a sergeant. Sgt Ruiz Rico didn’t exist on paper and for some reason he had allowed onto a military base. The team had gone to the base hoping to catch their fake sergeant and it turns out they had just missed him. He had been hanging around the cafeteria and had been noticed by the kids. The kids on the military base were all refugees whose had been left as unaccompanied minors and so they live on the base because housing was so scarce.

The kids mostly went to school and hung out as best they could, but they noticed sergeant because he had been taking pictures and so the team found out what he was taking pictures of. He had been taking pictures of one of the kids. It was a girl by the name of Elena and, by time authorities found her, she had been strapped to her mother who had drowned for hours. The girl was so traumatized that it took some time before she could open up and even then she didn’t like strangers. She would shy away from them and so it came as a surprise when Elena easily warmed up to Gibbs when he engaged her in a conversation. He and the others were trying to find out why a gang like La Vida Mala would target a child and they decided to start by talking to Elena.

Elena had told the team about her family and that her mother taught her English because she wanted them to come to the states for a better life. What Elena hadn’t told them was anything about La Vida Mala. The little girl didn’t know why the gang was after her and so the team had to go looking into the gang. They found out the east coast leader was Javier Martinez and that he had a place off the grid, so the team went to check it out and ran across a guard dog. The guy that was guarding the place had been doing his best to stop the federal agents from finding the other body and he failed. The team found it and they brought in Martinez to question him over his involvement only he denied all knowledge of that as well as other things.

The team also learned that the same day the fake sergeant was on the base, there was a robbery. Someone stole several rocket launchers and so the team knew the gang was collecting weapons though they didn’t know why and Javier wasn’t talking. He practically dared the team to find something to pin on him and so Sloane believed Elena knew something even if the little girl wasn’t sure if she knew something. Elena had heard about the gang because it was a problem in her country and so Sloane asked Elena to tell her everything about this gang. The gang it seems had been giving out ice cream to kids to the villages and wherever they went, violence was soon to follow.

Elena was too young to make the connection and so Sloane told the team the rest. She told the team that the gang was selling stolen weapons to foreign countries and that they were getting the weapons out of the country by using an ice cream company. The company would then giveaway free ice cream that the kids would notice and violence would follow which was what the adults noticed. So the team moved on the ice cream company that was stationed not far from where the weapons were stolen and they found the weapons in the dry ice except they had all been disarmed. Someone had made sure the weapons that were stolen could never be used and so Abby traced the finger prints back to “Sgt Rico”.

It turns out Rico had used the gang to get close to Elena and had then betrayed the gang when he found out what they were really doing, so the team later learned their Sgt Rico was actually Elena’s father. Her parents had split up when she was really young (which was why she didn’t remember it) and her father had needed a fake ID to see her. He was just going to stop at checking up on her, but then he disabled the guns and Martinez put out a hit on him as well as Elena. That was why the little girl was targeted and so her father agreed to testify against Martinez in exchange for protection.

And while Vance wasn’t sure what kind of deal the family would get, he was going to at least try to get them the necessary paper work to stay in the country because they all knew what would happen if they were deported.