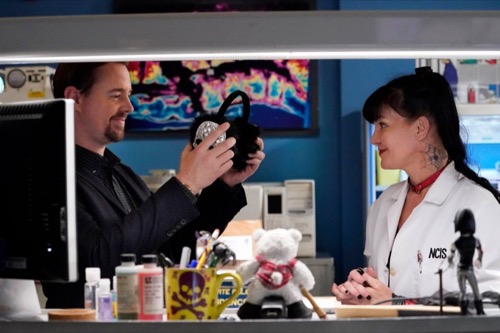 Tonight on CBS NCIS returns with an all-new Tuesday, May 1, 2018, season 15 episode 21 called, “One Step Forward” and we have your weekly NCIS recap below. On tonight’s NCIS season 15 episode 21, as per the CBS synopsis, “Sara Carter begs Gibbs to investigate her mother’s murder as she believes the local authorities convicted the wrong man. Also, Abby is awarded a dinner reservation for two to a brand-new five-star restaurant in an igloo and has to decide which coworker deserves to go with her.”

Gibbs was stopped on his way to work on tonight’s all-new episode of “NCIS” because of an altercation at the front gate.

The “altercation” as it was called was actually assaulted. A young woman came to the building demanding that her mother’s death is investigated by NCIS and she refused to leave when the guards asked her to file her motion through the proper channels. They wanted her to speak with someone on the phone and then be happy with whatever answer those people gave her, but Sara Carter said she was tired of being given the runaround and that her mother deserved better. Her mother was Chief Petty Officer Mae Carter and she had been killed in a robbery gone bad. There weren’t any suspects and there weren’t even any witnesses. And so a year passes without anyone getting arrested or held accountable for what happened to Carter, and her daughter Sara ended up punching a guard at the front gate to NCIS because she said her mother deserved better.

The guards later took Sara into custody and she probably would have been charged with assault for what she did if her detainment hadn’t made the news. Someone had recorded the whole thing and it leads to a media firestorm with everyone wanting an answer to why her mother’s case wasn’t investigated. It hadn’t mattered that Carter was retired or that her case was being handled by Virginal police because Sara was clearly desperate and the Navy was supposed to look after its own whether they were retired or not, so Gibbs decided to speak with Sara to hear her story from the source. She said that her mother did several tours in service of her country and that Sara even joined the armed services because of her mother who she knew for a fact deserved better than what she got.

Sara, however, was just a little too hot-headed. She kept saying that the investigation had been a bust and that the detective hadn’t known what he was doing only she failed to mention all that he did find. The team later spoke with Detective Olson and he said that he looked into everything. He looked into a man named Robert Flynn who had gotten picked up for robbery a few houses down and the detective hadn’t believed Robert was his guy. He said Robert had been honest when he said he wanted to go for valuables and that nothing had been stolen from Mae’s home. The house had simply been ransacked and so that made the detective think about what else Robert told him. Robert said he heard two women fighting from the Carter household and the detective verified this with two of the neighbors.

The neighbors all remember Carter fighting with her daughter Sara. Sara hadn’t owned up to that and she told the detective that she couldn’t remember what they were fighting about. Which both the detective and the team had a hard time believing. They knew that Sara’s fighting with her mother was probably the last conversation she had with the older woman and so there was no way she could have forgotten it. So the team looked into what else Sara could have conveniently forgotten and they found out that Sara had been in a lot of debt. She had been drowning in credit card bills and all that disappeared the same time that her mother died. And so the team went looking for Sara because they had questions. They went to her listed address and they hadn’t found her there.

They went on to find her in an alleyway because it seems she had been living in her car with her son for the past few months. Sara used to live with her mother at her mother’s house and that house went into foreclosure following Mae Carter’s death, which was why Sara and her son Theo have been living out of her car. The two were found out when Bishop and Reeves found them and Reeves had seen such a situation before. He worked with a charity that helps homeless vets find housing and so he had tried to help Sara when he learned about her situation. Reeves had offered to put Sara in contact with people that could help and she turned him down because she said she wasn’t homeless. Sara said that she was waiting for her mother’s murder to be solved before she left town to go live with an aunt in Texas and so Reeves checked. He found out that there was an aunt and that instead, Sara’s pride was stopping her from getting help.

Sara, it seems had suffered from brain damage from an explosion when she was overseas and so her condition severely limits her. She couldn’t hold down a job for long and that’s how she came to be in such much debt. Sara had even talked about her last conversation with her mother because they were right and she had remembered. She remembered arguing with her mother because Carter had used her life savings to pay off the debts and Sara hadn’t wanted her to do it. And so the team ruled out Sara in her mother’s death. They then looked into what else could there have been and what they found was that Carter had been looking into packages. She had gotten a list of several packages from a company called Global Courier and the team learned which packages she was looking for because they found a list that had imprinted itself on the inside of Carter’s pocket.

So after they realized what it was, they tracked down where the packages were being mailed to and they found out that there was a man named Jax Wesly. He sold prescription drugs and, while he later died when he ran out in front of a truck, the team did find the murder weapon in his possessions. Jax had been selling drugs and the team knew that Carter had had a problem, so they questioned if she could have been killed over a bad drug deal and her daughter Sara said that was impossible. Sara said her mother had gotten clean and it wasn’t until later that she admitted that she had gotten a prescription that went missing. Sara said her mother told her that they must have gotten dropped off somewhere else and that she believed it because she hadn’t thought her mother would steal her pills.

Sara had beaten herself up for believing her mom and the truth was Mae Carter hadn’t taken those pills. She had called the company when the medication wasn’t dropped off on time and they gave her a list of packages that had gone missing lately, so Carter investigated what could have happened and learned that the man that owned the shipping company had been stealing packages in order to supply the drug dealer. And so the two worked together to kill Carter because she had been investigating them and had wanted to take them down!

Mae Carter had merely wanted to take her daughter’s pain away and she had gotten killed for it. After she heard that, Sara put her pride to the side and decided to do what was best for her son Theo even if it meant she had to accept help.

Reeves had glad to help her and he had gone out with Abby afterward because the two wanted to enjoy this trendy restaurant they heard about, but they had gotten mugged on their way there and Abby had asked the mugger if she could help him because that’s just the kind of woman she is. And the robber hadn’t liked that because he thought Abby was trying to tell him that she was better than him. And so the last thing that happened on tonight’s all-new episode was the mugger turning his gun on Abby and firing…