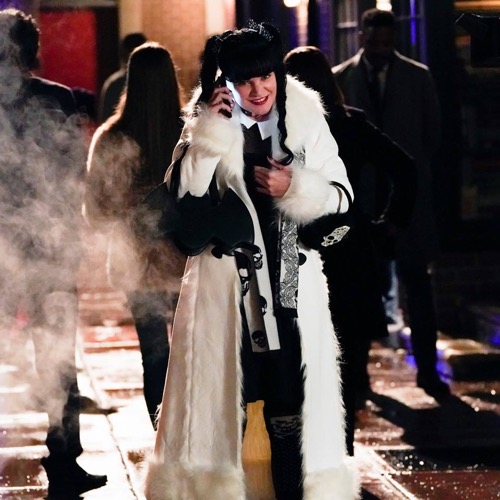 Tonight on CBS NCIS returns with an all-new Tuesday, May 8, 2018, season 15 episode 22 called, “Two Steps Back” and we have your weekly NCIS recap below. On tonight’s NCIS season 15 episode 22, as per the CBS synopsis, “When evidence reveals an NCIS team member is a hitman’s latest target, the team must search through old case files to determine who is seeking vengeance.”

The team suffered a significant loss on tonight’s all-new episode of “NCIS” when two of their friends got caught up in a mugging gone bad.

The two that had gotten hurt had been Clay and Abby. Abby had won a dinner for two at this exclusive restaurant and she invited Clay to be her plus one because she could see that he needed a night out. Clay tended to take care of everyone and so Abby had wanted to look after him for a change. She invited him to dinner and they were both so excited about it that it hadn’t seemed like a big thing when a man came towards them asking for change. They figured he must have been down on his luck and had wanted to help. Abby had said “sure” about the change and had had her head turned away while she got him the money when the homeless man pulled a gun on them. He hadn’t wanted just her change.

The homeless man had demanded all of their valuables. Clay hadn’t hesitated when he took off his watch and handed it over without a problem. Clay had also kept quiet while he did and Abby wasn’t like that. She handed over her handbag and had told her mugger that she had wanted to help him. Abby thought she could help this man make a better life for himself and all she was anger him. He hadn’t liked it when Abby said she could help because he accused her of looking down on him and believing she was better than him. The mugger had gotten so agitated that he demanded Abby repeat her statement even as Clay moved Abby behind him and, so when the mugger got what he wanted, he started shooting.

Clay had tried to protect Abby and had gotten killed for it. She, on the other hand, had also suffered a gunshot wound and had been rushed to the hospital in time. The doctors were able to take out the bullet and Abby eventually woke up. The first thing she did upon waking was asked about Clay and so McGee decided to fill her in on everything. He told her that Clay died and he mentioned what else the team found. They had been all hands on deck when they heard about their friends and finding the shooter had been the easy part. He had gotten some DNA on Clay when Clay fought with him over the gun and therefore the team knew that former Marine Kent Marshall had been responsible for Clay’s death. And that the mugging had actually been a hit job.

The team found Marshall dead at his apartment. His throat had been slit and whoever killed him hadn’t bothered hiding the evidence of why they killed him. Marshall had had a dossier on Abby and it told him everything about her. From the route she took to work and what she likes. Abby later used her own expertise to go through everything she had on file and she found out that the dinner for two deal had actually been fake. She learned that someone hacked into the restaurant’s database to send her an email and that they had even hacked into the restaurant’s reservation services just to cover their tracks, so Sloane did a profile for their culprit. She said whoever did was smart, calculating, well-connected, and could carry a grudge.

This person went out of their way to ensure Abby was killed. They must have staged a mugging to throw off whoever turned out to be her plus one and so Abby blamed herself for what happened to Clay. She thought she got him killed and had wanted to do something about it. Abby used the excuse of Rule #45 to lock up Torres in her coffin and then she went after the man that tried to kill her. The team found out it had been that Sgt. Robert King. King had black site connections and was a bio-terrorist. Abby had taken him down years ago and he was supposed to be in prison yet Gibbs and Bishop had gone to the prison and had found someone else in his cell. King had apparently threatened to kill a guard’s grandchildren to get the man to take his place and then he went free.

King had Marshall go after Abby and Clay had died to try to protect her. That meant it wouldn’t have mattered what she said because things would always have ended that way! Abby realized that and she later tracked down King to a café. He had been waiting for his flight out of the country and she had gone right up to him unafraid. Abby had let him talk and tell him how smart he was when the truth was she was keeping him busy while she slipped something into his coffee. She then waited until he drank the last drop and that’s when she told him that she slipped him some cyanide. Abby claimed everyone had a breaking point and that she reached hers, so she told him she’d give him something to cure him if he confessed.

Abby, however, hadn’t really given him cyanide. She gave him caffeine pills that gave him the same symptoms as cyanide at first and so she didn’t come clean until she got her confession. Abby used Rule #45 because that was one that said: “clean up your own mess”. She had wanted to get justice for Clay and she got that. Especially, when NCIS arrested King and sent him back to prison. So Abby thought long and hard about her life at NCIS before she ultimately decided now was the time to quit. She had lost too many on the job and she wanted to spend the rest of her life setting up a charity in Clay’s honor. It had been his dream to one day do that for his mother and Abby wanted to carry it out for him.

So Abby said goodbye to her longtime friends and she had tried to things a little easier for herself by writing Gibbs a letter.

Gibbs had been like a parent to her and so she hadn’t been able to say goodbye, but she wrote her letter and was there at his window to wave to him goodbye.