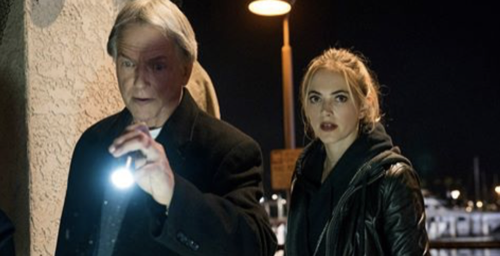 Tonight on CBS NCIS returns with an all-new Tuesday, January 2, 2018, season 15 episode 11 called, “High Tide” and we have your weekly NCIS recap below. On tonight’s NCIS season 15 episode 11, as per the CBS synopsis, “Torres and Bishop go undercover as a criminal couple available for hire, during an NCIS sting operation tracking illegal drug-running out of the Norfolk civilian marina.”

Bishop went in undercover as a prostitute on tonight’s all-new episode to get some much-needed information on NCIS’s latest case.

The team was investigating this drug dealer that managed to give everyone the slip and corner part of the market for himself. However, Jared Turner wasn’t the director’s chief concern. Director Vance has been getting a lot of flak from his own bosses about the massive amounts of fentanyl that was being brought in and so he hadn’t wanted to get information on Turner or Turner’s partners. He merely wanted to bring Turner in! Vance asked the team why Bishop and her “jealous” boyfriend Torres were doing reconnaissance when they could just easily arrest Turner on the information they did have.

But Gibbs thought differently. Gibbs figured they could find out how Tuner was able to bring the drugs in and stop once not just the trafficker, but also what’s being trafficked. So Gibbs and McGee waited for Bishop to clone Turner’s phone and then used that to gain as much as they could. They found out that Turner was in frequent talks with one man and that the man had warned Turner about a possible murder attempt which was something NCIS couldn’t sit back and watch happen. They had to act once they received the information and so both Torres and Bishop were heading back to Turner’s boat when it blew up.

The two had luckily been far enough away that they weren’t injured in the blast. Though Torres decided to fall back on his own protocol whenever an op goes sideways and so he dragged Bishop into hiding until he was sure they were safe and again got lucky when Gibbs didn’t get offended. Gibbs and the others had checked out the blast site and had wondered what happened to their two agents when Bishop reached out. She texted them from her burner saying that they were both okay and so Gibbs waited for the two to contact him more directly. And didn’t have to wait for long before they returned to the land of the living.

Torres had later explained that he was just taking precaution and that he did what he had to do to protect the op however Bishop both thought and said that he had been a little overzealous. She figured the op ended the moment Turner was murdered and so she was fine with following Vance’s directive to let things go. He wanted the two off the case because they were both compromised following the blast and he wanted the others to follow up on Turner’s partner. The partner’s name was Mitchell Young and he seemingly ran an inconspicuous store that hadn’t appeared to be a front for drugs. Though of course, it was and that’s where Torres eventually found Young.

Young had been busy making a sale when Torres walked in and told Young that he knew about his side business. He said that he and his girl ran a long con in which they pretend she’s a prostitute in order to get close enough to their marks to clone their phones. But according to Torres, he decided not to blackmail Young because he figured a guy like Young could offer him a job. Torres had wanted to help run drugs and had convinced Young to hire him by handing over information on Turner’s hone. So Young agreed to check out Torres’s alias and had even agreed to hire him when Torres’s cover held up under scrutiny. And so Torres decided to further test his luck.

Torres had gone behind both Gibbs and Vance’s back when he approached Young and to make things worse he had also asked for a job for his “girlfriend”. Yet, Torres never asked Bishop about going back in or ran it by her before he ran his mouth with Young. So Bishop had hated that. She was Torres’s partner and he tended to treat her as a subordinate what with always giving her orders rather than ideas except she followed his lead on this one because there was nothing else she could do. Her bosses had talked about it and they agreed to follow Torres’s play even if Torres wasn’t their favorite person for doing what he did.

It hadn’t mattered at that point. What mattered was working the connection Torres built with Young and so both agents used their aliases to get close to the mark. They wanted to find out how Young was bringing in the drugs and Torres had also built up a rapport with Donnie. Donnie allegedly worked for Young and Young was the boss. However, Young found out who killed Turner and had wanted Bishop to kill her to prove herself, but Torres had found a way to get her out of it. He and Bishop convinced Young to let Bishop take the young woman offsite and kill elsewhere. So Bishop took Frankie Mancuso back to NCIS.

NCIS then helped Bishop stage a couple of photos of a dead Frankie and in exchange for not ratting Frankie out as a snitch, they got her to talk to them. She told them about how Richard Lane was the one runnings things and that was funny because Lane pretended to be a mere boat owner that was upset he rented the boat to Turner on the night Turner blew up. But figuring Lane was their guy, they thought they could finally put an end to the case. They went back to Young’s store and was going to arrest him when they saw blood on the floor. They hadn’t known who it belonged to and so Bishop kept her cover.

She pretended to walk in on Gibbs and McGee when they had a gun on Young and so she made Young believe she just saved his life. Though Bishop used that currency to demand where her boyfriend was. She asked Young if the blood belonged to Torres and he told her that it instead belonged to Lane. Lane hadn’t been their boss. He really did just rent out his boats and eventually, he caught on to what Young was doing. So Lane demanded money for his silence and Young killed him to keep him quiet yet Young also revealed something. He said that Lane wasn’t running things and had laughed off the idea that he was the boss.

The boss as it turns out was Donnie who pretended to be the harmless young man that got caught up in something he couldn’t get out of. Yet, Torres had bought that story and after Lane shot Donnie he told Donnie the truth. He told him that he was a federal agent and that he could help leave the organization. So it dawned on Torres that he had been wrong about Donnie when Donnie pulled a gun on him and so Torres had had to fight his way out of that on his own. He drove Donnie to the safehouse and had crashed the car to get the upper hand on the other man. And he thought he would have to shoot his way through the others when his own team arrived to save the day.

They had arrested Young and he revealed where the safe house was, but while Torres did get into some trouble for what he did earlier, he and Bishop actually grew closer over what happened and he rubbed off on her because she was now more willing to trust her gut on a case.