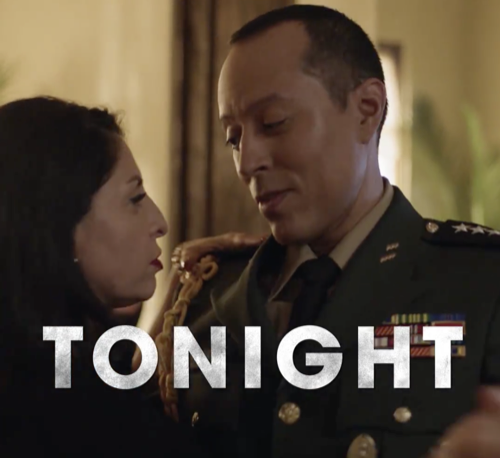 30 Miles South of Phoenix – Theresa, Pote and James are at a diner. A sheriff pulls up. The sheriff chases the owner outside. Theresa and the guys leave. On their way out they see the sheriff harassing the man out back. They head to a location James has checked out. Theresa tells him her plan to connect with a bunch of mid-level dealers. He knows all about how the cocaine gets across the border to here and what groups control it.

Camila has a nightmare involving Theresa. She wakes up in a sweat. Meanwhile, Theresa watches the local news and sees the sheriff from the other day. She asks James to get them a meeting with the La Commission who has the sheriff in their pocket.

Theresa and Pote go to see a piece of property where they plan to set up shop. A realtor named Kelly, who Theresa knows, shows them around. They talk about a little boy that is in Kelly’s care. Theresa is glad he is doing well. It is too dangerous for her to see him.

Camila and Cortez talk about drugs over the border when her daughter comes in. Camila tells her there is a march coming up, called the Widow March. But she must not attend. It is too dangerous for her. Her daughter refuses to let her go alone.

James gives Theresa a run down on the commission before they go to meet them. Theresa meets with them and offers safe passage for their product. She also offers to get rid of the sheriff on their routes who has been setting up road blocks, cutting into their profit.

Camila meets with Castel. She tells Camila that she needs to back down. Camila is not happy. Meanwhile, Theresa talks to Ivan. He sends her a video of the sheriff beating a prisoner.

The general goes to meet Boaz who just lost a lot of product. He tells the Boaz that Camila is playing him. Boaz isn’t afraid to take her out.

Theresa and James come face to face with the sheriff. He pulls a gun on them and tells them to raise their hands.

Camila watches the news. The cartels have threatened those who plan to attend the Widow’s March. A tarot card reader comes to see her. The tarot reader tells her there is darkness ahead.

The sheriff, Mayo, brings Theresa and James in cuffs to see the reporter who she leaked the video to. The sheriff is mad that the reporter asked him to comment on the video. He makes James and Theresa watch as he chops off the reporter’s hand and then kills him. He wants money. Theresa offers to stay with him while James goes to get it. If they pull anything funny he knows about the bounty on Theresa’s head. He will call Camila.

Theresa calls James who is now with Pote. Mayo wants to meet them at an old drive-in movie theater. Theresa and Mayo sit in his cruiser and watch his fellow officer make an arrest. Mayo tells Theresa he treats his people the way he does to try and change the negative perceptions they have brought on themselves being on welfare and more.

James and Pote meet with Mayo. Mayo tells Theresa to get out of the car slow and not get herself shot. James hides in the distance with a rifle ready. They start to make the exchange when Mayo’s guy realizes some of the cash is paper. Pote shoots at him, Theresa runs. James shoots Mayo in the back. They all get out.

A women dressed in black with a veil is knifed at the march. Camila’s daughter cries. She runs to the woman but realizes it isn’t her mother.

Theresa gets Pote and James to get the rest of the money. She wants to give it to the reporter’s family. Meanwhile, Castel tells Camila she will back down. Cortez and Camila toast after she leaves.

Theresa comes to see Ivan at her property. All of her security is up and running. The commission shows up. They are happy Mayo is in a coma. She has done good and they welcome her business. She prepares them wine while quietly talking to James. There is a rat inside the commission.