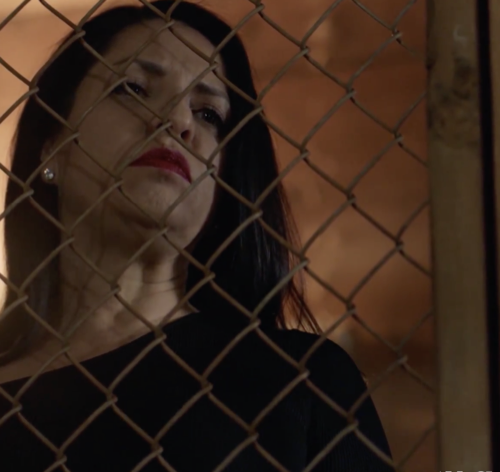 Camilla wakes in bed and touches the empty side. She sees her late husband’s watch in the closet and thinks back to a dinner they had. She was mad her husband was buying another woman gifts. She puts the watch on after taking a call.

Teresa is brought to a room by Cortez. She wants to speak with Camila. He tells her when she is ready. In her cell, she sees a familiar face in the adjoining cell. She remembers back to one of their jobs together. He was captured and tortured by Cortez. He tells Teresa he thinks he has a way out.

Pote and James are looking for Teresa. They talk to one of Boaz’s men who connect them with Boaz. James tells him if he wants revenge on Camila he will help him. Boaz agrees. Pote and James head to Mexico.

Camila comes to see Teresa in her cell. Camila talks about how she is the reason her husband is dead. Teresa tells her it is her greed that got him killed. Teresa threatens Camila, telling her that her men will perform a wire transfer exposing her to the dirty politician she is. Camila has her men go after the love of Teresa’s life, Guero. He groans in pain while Teresa tries to endure the sounds. They leave shortly after cutting him.

Teresa recalls a better time when they were together in a place of their own. Meanwhile, Cortez talks to his men about women who rarely reserve a loyal man.

Guero has a flashback to when he was first taken in as a prisoner. Tomas works on him. He asks Tomas to keep him alive for Teresa.

Camila’s daughter comes to see her. She is mad that she had to find out from someone else that her mother has Teresa in a cell.

Guero and Teresa work on getting out of their cell’s while the guard is busy. Guero is bleeding badly. Teresa calls to the guard who comes into Guero’s cells. Guero slashes his throat. They get free. As they are ready to leave, Isabella comes in. She has a gun. Guero points his gun at her and forces her to drop the gun. Guero and Teresa run for it. They see Camila and Cortez outside. They get away after shots are fired between the both of them. They stop somewhere in the woods and leave on foot.

Camila comes to see Isabella who is crying. She tells her Teresa got away. She tried to kill her but she couldn’t. Camila is mad. She forbid her from coming to see Teresa. Camila tells her the wedding is off. She is making Isabella’s decisions for her now.

Cortez vows to bring Teresa back to Camila. Meanwhile, Teresa and Guero make it to Tomas’ clinic on foot in the dark. Guero won’t stop bleeding. Teresa calls Pote and James and tells them where she is. They are close by.

Teresa remembers back to when Guero gave her the deed to their house. A knock comes. Teresa and Guero hide in the attic above theexamininge room table. It is Cortez. He asks to have his hand wrapped. He shows Tomas the knife that Guero had to kill the guards. Tomas tells him he knows nothing. He wouldn’t help a fugitive. Blood from Guero drips down on Cortez’s cheek. Just in time, James and Pote show up and throw a smoke bomb into the room. Gunfire erupts. Teresa and Guero get out. All four of them take off as Cortez fires shots at their car.

Teresa holds Guero in the back seat. He says his hellos and thanks to Pote and James. He is losing a lot of blood. Meanwhile, Camila recalls a fight with her husband when she wanted to end their marriage.

Teresa and the guys make a stop. Teresa realizes Guero is not breathing. Pote gives her a sad look after checking him over. Teresa is in disbelief.

Camila serves Cortez a home cooked meal. He apologizes for losing Teresa. Meanwhile, Teresa and the guys bury Guero. She says her goodbyes before sitting in the car crying. They leave and head to Phoenix.