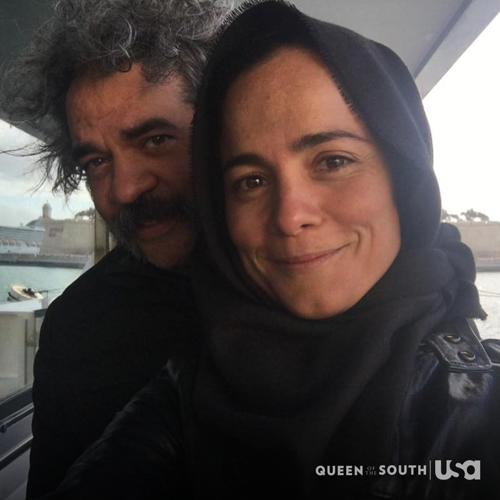 Kelly toasts with the others to have Teresa back as they all eat, drink and talk by the pool during her welcome home party. Pote is upstairs looking around to figure out who the rat is. James wonders where Pote is. Pote comes downstairs and asks Teresa to come inside the kitchen to talk. Pote found a bug and a recorder in James’ room. They take a listen quick. James had made a deal. Pote is angry. He lectures Teresa on trusting the wrong people.

Camila is stranded, walking down the street in a red dress with a broken sandal. She comes to a small field where people are mourning at a grave. She steals one of their cars on the side of the road.

Teresa talks to the tech guy. She wants him to track the bug and recorder they found. She heads to see James tell him El Santo wants to meet with her alone later at an abandoned factory. He tells her he is here for her. She keeps the act of trust up and reciprocates when he kisses her.

Camila goes into a store but keeps a low profile when she sees soldiers. She runs after they walk by and escapes into a building where she has guns, money, and booze. She plays a record in what appears to be a little dance hall she once performed in as she recalls memories from years past. People clap but her memories come to a halt after she shakes after remembering the men who came in shooting.

Kelly asks Teresa if she is all right. Teresa tells her it has been a rough couple of days. Meanwhile, James realizes the bug was taken.

Camila remembers meeting Vargas. A knock on the door interrupts her thoughts. It’s Loya. He offers her witness protection. She doesn’t want it. But after he tells her there is no coming back from this she changes her mind.

Pote and Teresa go to see Lil T. They eat tacos and talk. Lil T admits she called her uncle. Teresa takes a call. It’s James. He knows she knows about Devo and the leak. He wants to meet her at the safe house so he can explain. Pote thinks it is a trap. They show up. James tells him he found the mole, its Kelly.

Pote and Teresa don’t know what to believe. Teresa talks to Kelly. She tries to lie but Teresa calls her out. She never told her about the bug. Kelly cries. She was forced into being a mole. Devon tracked her and threatened her. Devon told her El Santo was going to kill Teresa. Kelly tells her how she tried to run but they were always watching her.

Teresa doesn’t know what to do about Kelly. Pote tells her she needs to make a choice. Meanwhile, Camila is daydreaming about Vargas when he offered her a chance to leave her life behind. She remembers leaving the studio behind. Someone comes in. She thinks it is Loya but it is a female soldier. She hides well readying herself to fight. She attacks the soldier. The two women fight on the floor. Camila gets the upper hand and the gun. She points it at her head but when she sees herself in the mirror, she stops. She is just Camila now. She grabs a bag and leaves.

Pote and James bring Kelly to the woods. She rants about how she loves Teresa and begs Pote to take care of Teresa. Pote screams ‘why’ at her. James shoots her because Pote is too emotional.

Teresa meets with Lil T and gives her a bag of money. She tells her to go back to school.

James is upset that Teresa thought it was him. She apologizes. He tells her he needs a break.

James calls Camila. They talk. He will deal with Teresa, he tells her.